Flashback Friday: She had an extra nipple where?!? 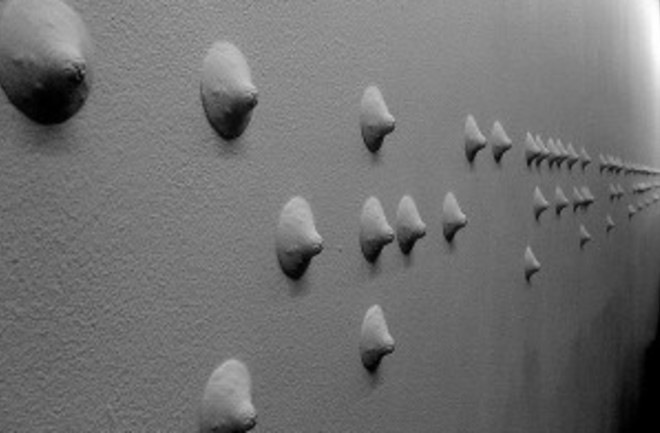 Yup, you guessed it--according to this case study, a woman was found to have an extra nipple... in her vulva! And guess what else? It produced milk! Although extra nipples aren't all that common, they usually can be found along the "milk line" (the imaginary line on a person's torso that correlates with the line between multiple pairs of nipples on other mammals). But extra nipples have also been reported on other places, like the foot. So this extra nipple is unusual for its location. But what makes it really special is that it actually produced milk. It turns out that most extra nipples don't come with much breast tissue, much less the capacity for milk formation. However, because of the risk of malignancy, this extra nipple was removed after it was diagnosed.

Supernumerary nipple presenting as a vulvar mass in an adolescent: case report

"BACKGROUND: Ectopic breast tissues can be found along the embryonic mammary ridges and can occur in the vulva. While ectopic breast tissue is not uncommon, functional breast with overlying nipple located within the vulva is exceedingly rare. CASE: A 17-year-old with undiagnosed hypothyroidism presents with vulvar mass draining milky white fluid. A small lesion with appearance similar to a skin tag is noted and milky fluid expressed. Biopsy and excision of this mass confirmed the presence of a functional supernumerary nipple. SUMMARY AND CONCLUSIONS: This appears to be the first reported case of a supernumerary nipple with symptomatic lactation in a non-pregnant adolescent. Supernumerary nipple should be considered in the differential diagnosis of a vulvar mass. Ectopic breast tissue in the vulva can undergo malignant transformation, therefore excision of this tissue is generally recommended." Related content: NCBI ROFL: A foot needs a nipple like a fish needs a bicycle. NCBI ROFL: Sex differences in relative foot length and perceived attractiveness of female feet. NCBI ROFL: Inverted nipples. What to do?