Flashback Friday: Self-surgery -- not for the faint of heart. 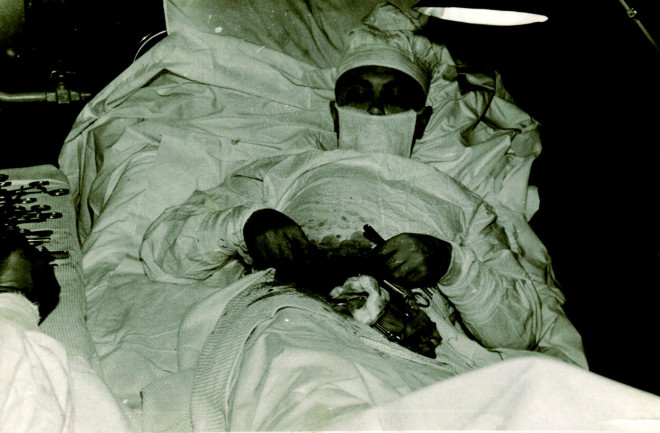 Today's post isn't exactly funny, but it is bizarre, awe-inspiring, and a little frightening. Here are three cases of DIY surgery. And we aren't talking about removing an ingrown nail; these are major surgeries. Although the excerpts of each article are longer than our usual fare, they are definitely worth reading!Auto-appendectomy in the Antarctic: case report "The ship Ob, with the sixth Soviet Antarctic expedition on board, sailed from Leningrad on 5 November 1960. After 36 days at sea she decanted part of the expedition onto the ice shelf on the Princess Astrid Coast. Their task was to build a new Antarctic polar base inland at Schirmacher Oasis and overwinter there. After nine weeks, on 18 February 1961, the new base, called Novolazarevskaya, was opened...One of the expedition’s members was the 27 year old Leningrad surgeon Leonid Ivanovich Rogozov. He had interrupted a promising scholarly career and left on the expedition shortly before he was due to defend his dissertation on new methods of operating on cancer of the oesophagus. In the Antarctic he was first and foremost the team’s doctor, although he also served as the meteorologist and the driver of their terrain vehicle. After several weeks Rogozov fell ill. He noticed symptoms of weakness, malaise, nausea, and, later, pain in the upper part of his abdomen, which shifted to the right lower quadrant. His body temperature rose to 37.5°C. Rogozov wrote in his diary: "It seems that I have appendicitis. I am keeping quiet about it, even smiling. Why frighten my friends? Who could be of help? A polar explorer’s only encounter with medicine is likely to have been in a dentist’s chair." All the available conservative treatment was applied (antibiotics, local cooling), but the patient’s general condition was getting worse: his body temperature rose, vomiting became more frequent. "I did not sleep at all last night. It hurts like the devil! A snowstorm whipping through my soul, wailing like a hundred jackals. Still no obvious symptoms that perforation is imminent, but an oppressive feeling of foreboding hangs over me... This is it...I have to think through the only possible way out: to operate on myself ...It’s almost impossible ... but I can’t just fold my arms and give up... The guys have found out. They keep coming by to calm me down. And I’m upset with myself—I’ve spoiled everyone’s holiday. Tomorrow is May Day. And now everyone’s running around, preparing the autoclave. We have to sterilise the bedding, because we’re going to operate. Following Rogozov’s instructions, the team members assembled an improvised operating theatre. They moved everything out of Rogozov’s room, leaving only his bed, two tables, and a table lamp. The aerologists Fedor Kabot and Robert Pyzhov flooded the room thoroughly with ultraviolet lighting and sterilised the bed linen and instruments. As well as Rogozov, the meteorologist Alexandr Artemev, the mechanic Zinovy Teplinsky, and the station director, Vladislav Gerbovich, were selected to undergo a sterile wash. Rogozov explained how the operation would proceed and assigned them tasks: Artemev would hand him instruments; Teplinsky would hold the mirror and adjust the lighting with the table lamp; Gerbovich was there in reserve, in case nausea overcame either of the assistants. In the event that Rogozov lost consciousness, he instructed his team how to inject him with drugs using the syringes he had prepared and how to provide artificial ventilation. Then he gave Artemev and Teplinsky a surgical wash himself, disinfected their hands, and put on their rubber gloves for them. When the preparations were complete Rogozov scrubbed and positioned himself. He chose a semi-reclining position, with his right hip slightly elevated and the lower half of the body elevated at an angle of 30°. Then he disinfected and dressed the operating area. He anticipated needing to use his sense of touch to guide him and thus decided to work without gloves...The operation began at 2 am local time. Rogozov first infiltrated the layers of abdominal wall with 20 ml of 0.5% procaine, using several injections. After 15 minutes he made a 10-12 cm incision. The visibility in the depth of the wound was not ideal; sometimes he had to raise his head to obtain a better view or to use the mirror, but for the most part he worked by feel. After 30-40 minutes Rogozov started to take short breaks because of general weakness and vertigo. Finally he removed the severely affected appendix. He applied antibiotics in the peritoneal cavity and closed the wound. The operation itself lasted an hour and 45 minutes. Partway through, Gerbovich called in Yuri Vereshchagin to take photographs of the operation. Gerbovich wrote in his diary that night: "When Rogozov had made the incision and was manipulating his own innards as he removed the appendix, his intestine gurgled,which was highly unpleasant for us; it made one want to turn away, flee, not look—but I kept my head and stayed. Artemev and Teplinsky also held their places, although it later turned out they had both gone quite dizzy and were close to fainting...Rogozov himself was calm and focused on his work, but sweat was running down his face and he frequently asked Teplinsky to wipe his forehead . . . The operation ended at 4 am local time. By the end, Rogozov was very pale and obviously tired, but he finished everything off."

Within two weeks he was able to return to his normal duties and to his diary. "I didn’t permit myself to think about anything other than the task at hand. It was necessary to steel myself, steel myself firmly and grit my teeth. In the event that I lost consciousness, I’d given Sasha Artemev a syringe and shown him how to give me an injection. I chose a position half sitting. I explained to Zinovy Teplinsky how to hold the mirror. My poor assistants! At the last minute I looked over at them: they stood there in their surgical whites, whiter than white themselves. I was scared too. But when I picked up the needle with the novocaine and gave myself the first injection, somehow I automatically switched into operating mode, and from that point on I didn’t notice anything else. "I worked without gloves. It was hard to see. The mirror helps,but it also hinders—after all, it’s showing things backwards. I work mainly by touch. The bleeding is quite heavy, but I take my time—I try to work surely. Opening the peritoneum, I injured the blind gut and had to sew it up. Suddenly it flashed through my mind: there are more injuries here and I didn’t notice them...I grow weaker and weaker, my head starts to spin. Every 4-5 minutes I rest for 20-25 seconds. Finally, here it is, the cursed appendage! With horror I notice the dark stain at its base. That means just a day longer and it would have burst and-- At the worst moment of removing the appendix I flagged: my heart seized up and noticeably slowed; my hands felt like rubber. Well, I thought, it’s going to end badly. And all that was left was removing the appendix ...And then I realised that, basically, I was already saved." Do it to yourself section. The Kane surgery. "Dr.Evan O'Neill Kane, chief surgeon of Kane Summit Hospital, performed an operation upon himself for chronic appendicitis this forenoon. Sitting on the operating table propped up by pillows and with a nurse holding his head forward that he might see, he calmly cut into his abdomen, carefully dissecting the tissues and closing the blood vessels as he worked his way in. Locating the appendix, he pulled it up, cut it off and bent the stump under. Dr. Kane is 60 years old and has operated in nearly 4,000 appendicitis cases. Nor is he a stranger in the field of self-operating, as he has amputated one of his own fingers two years ago. The operation today was witnessed by his brother, Dr. Tom L. Kane, and two other physicians, besides nurses. He went as far with the operation as he ever does with a case, allowing his assistants to close the wound... He told the Times reporter that he did this self-surgery to demonstrate the safety both of local anesthesia for a "major operation" and of appendectomy... This time, he had operated on himself the day before [Jan 7, 1932] for an inguinal hernia (which followed an injury he had suffered while riding horseback). Apparently, "Dr. Kane, who is hale and hearty for his age (70), smiled throughout this operation".

"The legend beneath the photograph reads as follows: 'A dramatic picture, this... Dr. Kane, 70, joked with these nurses as he plied knife. In 1921, he removed his own appendix. Wotta man!'"

"An unusual case of self-inflicted cesarean section with maternal and child survival is presented. No similar event was found in an Internet literature search. Because of a lack of medical assistance and a history of fetal death in utero, a 40-year-old multiparous woman unable to deliver herself alone vaginally sliced her abdomen and uterus and delivered her child. She was transferred to a hospital where she underwent repair of the incisions and had to remain hospitalized. Mother and child survived the event. Unusual and extraordinary measures to preserve their offspring sometimes moves women to extreme decisions endangering their own lives. Social, educational, and health measures should be instituted all over the world, particularly in rural areas of developing countries, to avoid such extreme events." Additional details (including quotes from the mother) can be found in this news article

Discoblog: NCBI ROFL: Are you having a seizure? Quick, smell my shoe!