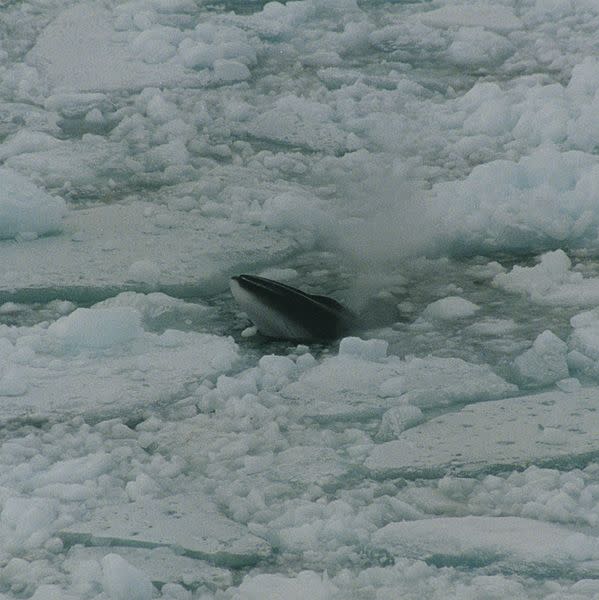 In the 1960s, sailors in submarines off the coasts of Antarctica and Australia noticed a mysterious noise, which they called the “bio-duck sound” due to its resemblance to a duck quacking (see video below). The source of the sound remained a mystery for decades… until now. In this study, researchers discovered the bio-duck sounds in recordings that also contained sounds already known to be produced by Antarctic Minke whales. The association of the bio-duck sounds with minke whales will help researchers track and study these whales, which is difficult due to the icy seas in which they live — seas that are undergoing rapid changes associated with global warming.Mysterious bio-duck sound attributed to the Antarctic minke whale (Balaenoptera bonaerensis).

“For decades, the bio-duck sound has been recorded in the Southern Ocean, but the animal producing it has remained a mystery. Heard mainly during austral winter in the Southern Ocean, this ubiquitous sound has been recorded in Antarctic waters and contemporaneously off the Australian west coast. Here, we present conclusive evidence that the bio-duck sound is produced by Antarctic minke whales (Balaenoptera bonaerensis). We analysed data from multi-sensor acoustic recording tags that included intense bio-duck sounds as well as singular downsweeps that have previously been attributed to this species. This finding allows the interpretation of a wealth of long-term acoustic recordings for this previously acoustically concealed species, which will improve our understanding of the distribution, abundance and behaviour of Antarctic minke whales. This is critical information for a species that inhabits a difficult to access sea-ice environment that is changing rapidly in some regions and has been the subject of contentious lethal sampling efforts and ongoing international legal action.” [embed]https://www.youtube.com/watch?v=qblFlycZRVs[/embed] Related content: NCBI ROFL: Whale ménage à trois: now with 1,000-kg testes!

Holy carp! Fish can use tools too!