Flashback Friday: Does garlic protect against vampires? An experimental study. 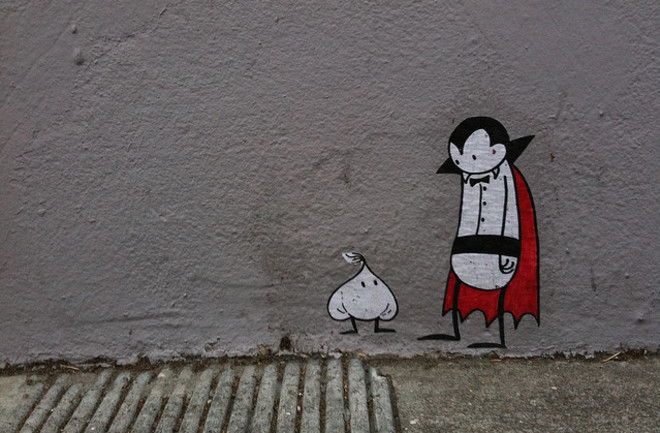 Image: Flickr/Ross HarmesWe all know that garlic will supposedly keep vampires at bay. But where does this legend come from, you ask? Who cares!? It's here to stay. What we really want--no, NEED-- to know is whether or not it actually works! But since actual vampires are in such short supply, how can anyone test this hypothesis? Well, we can do what many scientists do on a daily basis: come up with as realistic a model as is plausibly testable, and run experiments using that. It's true that this is not the same as testing the hypothesis directly, but by iteratively approximating the real thing using models, scientists can learn a lot that will help get us to the "real" answer. In this case, the model for vampires that these Norwegian doctors settle on is ... the leech. Yes, it's a bit of a stretch, but hey, it still makes for a pretty fun tongue-in-cheek study (or should I say tooth-in-neck?)!Does garlic protect against vampires? An experimental study. Vampires are feared everywhere, but the Balkan region has been especially haunted. Garlic has been regarded as an effective prophylactic against vampires. We wanted to explore this alleged effect experimentally. Owing to the lack of vampires, we used leeches instead. In strictly standardized research surroundings, the leeches were to attach themselves to either a hand smeared with garlic or to a clean hand. The garlic-smeared hand was preferred in two out of three cases (95% confidence interval 50.4% to 80.4%). When they preferred the garlic the leeches used only 14.9 seconds to attach themselves, compared with 44.9 seconds when going to the non-garlic hand (p < 0.05). The traditional belief that garlic has prophylactic properties is probably wrong. The reverse may in fact be true. This study indicates that garlic possibly attracts vampires. Therefore to avoid a Balkan-like development in Norway, restrictions on the use of garlic should be considered. Related content: NCBI ROFL: Nasal leech infestation: report of seven leeches and literature review. NCBI ROFL: Attack of the belly button lint! NCBI ROFL: Mummified cow fetus.