Flashback Friday: Could the next all-natural insect repellent be made out of earwax? 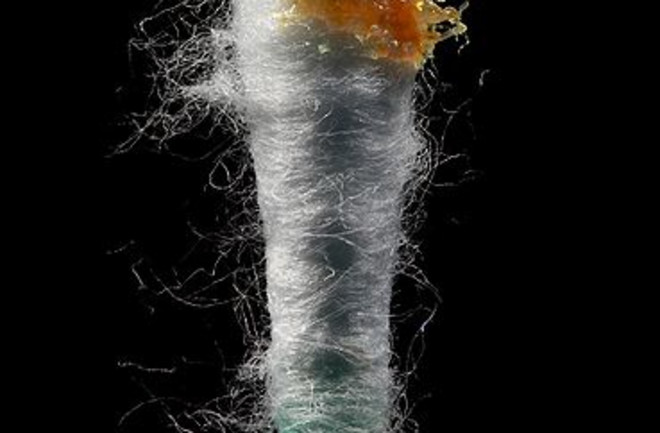 Photo: Wikimedia Commons/Gregory F. MaxwellJust in time for the dog days of summer, when mosquitoes swarm at their thickest, we bring you this classic from our archives. Here, scientists hypothesize that ear cerumen (earwax), in addition to its anti-fungal and anti-bacterial properties, would be a great insect repellent. You might be grossed out, but nothing says "summer fun" better than a nice even coating of earwax! Earwax (cerumen) might be formulated into a safe and biodegradable insect repellent “Some of the most common life threatening insect-borne diseases include malaria, leshmaniasis and yellow fever which can be prevented or treated with different non-therapeutic/therapeutic procedures such as use of mosquito net, insect repellent (IR), vector controlling strategies, vaccination and implementation of pharmaceuticals. Among these methods IR provides the cheapest and easiest one to use. Active ingredients of IR usually include N,N-diethyl-3-methylbenzamide (DEET), botanical extracts and picaridin. However still some concerns remain e.g. DEET is not biodegradable, has side effects on skin, cardiovascular and central nervous system and is not applicable in under 3 years old children and animals. Cerumen is produced by glands that are located on the outer third of the ear canal, has a characteristic of bitter taste and protection of ear which is known as IR, bactericide, fungicide and antivirus. It has lipidic and non-lipidic fractions; lipid fraction is consisted of squalene, cholesterol esters, wax esters, triacylglycerols, fatty acids, cholesterol, ceramides, cholesterol sulfate, and several unidentified polar components. The authors would like to hypothesize an IR made from fatty acids and steroids of cerumen. Whereas masking skin odor and presenting a bad taste is the mechanism of action for IRs. Also fatty acids considered as major ingredient of Neem Oil as repellent, a screening of lipid fraction with the aim of discovering which components have the major effect is recommended. The advantages of the proposed formulation will be easy of production, biodegradability and safety of use in adults, children and animals. Beside, proteins and peptides in cerumen could be further analyzed in order to investigate a nontoxic multi-spectrum antibiotic; possessing bactericidal, fungicidal and antiviral activity.” Related content: Discoblog: NCBI ROFL: Beer Consumption Increases Human Attractiveness to Malaria Mosquitoes. Discoblog: NCBI ROFL: Superglue in the ear double feature: pros and cons. Discoblog: NCBI ROFL: Atheism: Solved.