Flame Retardants Are Toxic & Haven't Been Shown to Save Lives. Why Are They Ubiquitous? 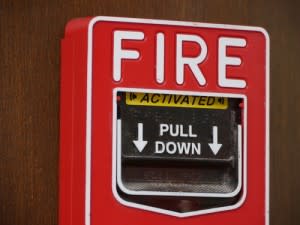 "The average American baby is born with 10 fingers, 10 toes and the highest recorded levels of flame retardants among infants in the world." So begins the Chicago Tribune's damning four-part series

about spin and science, or lack thereof, in the flame retardants industry. Flame retardant chemicals have become so ubiquitous--there's two pounds of the stuff in just the cushions of a large couch---because we've accepted the health dangers are worth the protection they provide against fire. Except, there is no scientific basis for the claim that flame retardants save lives. Part three

in the series, published today, is a systematic debunking of the few studies the industry has continuously cited as evidence for the efficacy of flame retardants. One obscure Swedish study, available only in Swedish, relied on flimsy evidence from just eight electrical fires caused by TVs. The peer-reviewed paper also lists a PR specialist among its authors. The lead scientist of another study has disavowed what he calls the industry's "grossly distorted" flogging of his work, which looked at levels of flame retardants far above industry standard in household furniture. These examples and many more show how scientific authority has been manipulated for profit:

Industry has disseminated misleading research findings so frequently that they essentially have been adopted as fact. They have been cited by consultants, think tanks, regulators and Wikipedia, and have shaped the worldwide debate about the safety of flame retardants.

into advocating flame retardants to smooth over the PR problem of cigarette-lit fires. The industry has gotten very clever at hiding its PR work behind faces of authority, but that doesn't change the fact they're manipulating the truth. At the Tribune'swebsite

is a whole media package including videos, interactive graphics, and the original documents unearthed in the investigation. Check them out. The last part of this series will be published Thursday.