First Glance Into the Gut

Researchers implant glass windows in mice to watch the gut in action. 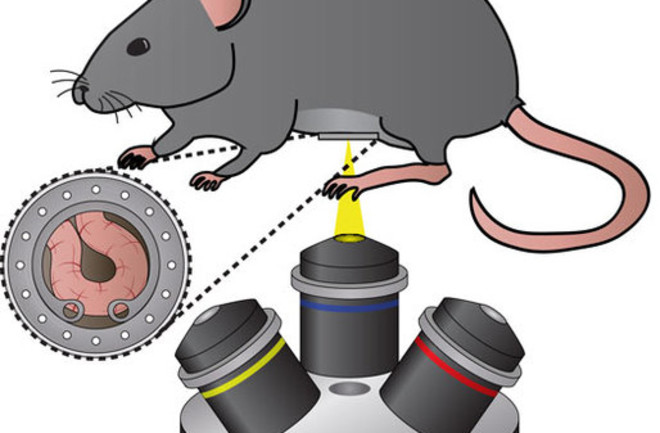 This schematic shows how researchers used a glass window and microscopic imaging to get a live view of neurons in the digestive system. | Reprinted by permission from Macmillan Publishers Ltd

“Gut instinct” isn’t just a turn of phrase — the digestive system actually contains five times more neurons than the spinal cord. But how this so-called second brain works has remained mysterious. Now, Duke University researchers have created a window — literally — into this once-hidden part of the body.

Engineer Xiling Shen and his colleagues cut a tiny hole in a mouse’s abdomen, affixed sensors outside the intestine to monitor both electrical and chemical activity, and sealed the hole with glass. Their engineering provided the first-ever live-action movie of nerves lighting up in the gut.

Getting a look at these digestive neurons, called the enteric nervous system, could provide insight into gastrointestinal conditions, like irritable bowel syndrome. These disorders stymied researchers in the past, because current GI imaging can’t see the neurological activity likely related to these problems.

After their work was published in Nature Communications in June, the group improved the picture’s quality by adding more sensors. They are also making their technology available to other groups studying diseases like IBS. What started as a window into a nervous system could become a door to better understanding and treatment of GI diseases, Shen says.