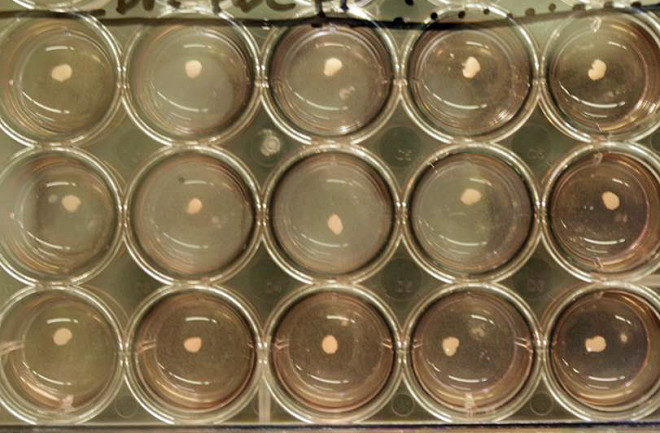 Proto-livers in dishes in the lab. Credit: Takanori Takebe A team of Japanese researchers has created the first functioning human organ, a liver, from induced pluripotent stem cells. While the technology is at least a decade from clinical application, it opens the door to using stem cells to solve the shortage of donor organs. The organ precursors were grown in the lab using iPS cells. When these early organs, called liver buds, were transplanted into mice, they matured into tissue resembling the adult human liver. After just four to six days, the cells had self-organized into a functioning organ with a healthy blood supply.

Made from stem cells

The team of researchers at Yokohama City University began with human skin cells, which they genetically reverted to an embryonic stem-cell state and then coaxed into liver-precursor cells. They then exposed these cells to environments similar to what the developing liver experiences in a fetus, adding to the dish stem cells that line blood vessels and form tissues. Within 48 hours the cells had amassed into tiny proto-organs visible to the naked eye. Once the liver buds were about 4 or 5 millimeters, the team implanted 12 liver buds into either the brain or abdomen of each mouse---sites chosen for their ease of access. The researchers had labeled the cells with fluorescent proteins, which helped them monitor the buds for formation of blood vessels. They found that the organ developed a vascular system almost immediately and performed liver-specific functions within weeks. By day ten the transplanted liver buds were producing albumin, a key protein produced by the liver. After 60 days the gene expression of cells in the liver bud had significantly shifted from its precursor cells.

Proof that it works

As further proof, the mice were given drugs that mice livers cannot normally metabolize but human livers can. The mice successfully broke down these drugs into the same components that humans do. The results are published today in Nature. The technique is unlikely to produce whole replacement livers, but could be used to grow mini-livers that supplement a failing organ. Such transplants wouldn't even need to be located near the existing liver. Lead researcher Takanori Takebe hopes to reduce the size of the liver buds to 100 micrometers, so they can be injected into the bloodstream of mice. Takebe estimates that with an infusion of hundreds of thousands of liver buds, about 30 percent of a person’s liver function could be restored. “The limitation at the moment is to create enough suitable liver buds in sufficient quantity to create a viable clinical therapy,” he said. The team envisions treatment initially for infants and children who have critical liver damage and would die without therapy.