First ever molecule that protects against ricin

In 1978, Bulgarian dissident Georgi Markov was walking across Waterloo Bridge in London when he felt a sharp stinging pain in his leg. A passer-by had jabbed him with the tip of an umbrella and, having apologised, the two parted ways. Three days later, Markov was dead. The umbrella had fired a small poisoned pellet into his leg, turning Markov into the most famous victim of one of the world’s deadliest poisons – ricin. Ricin is a great example to cite to people who think that “natural” equates to “healthy”. It’s a protein that comes from the castor bean, which is easy to grow, used in a wide variety of products, and delivers large amounts of its lethal chemical payload. One milligram can be lethal, and there is no known antidote. All of these qualities make it a potential bioterror weapon, and they have galvanised the quest for an antidote. That quest has just taken a big step forward, for Bahne Stechmann at the Curie Institute has discovered the first small molecule that protects mice against ricin. Stechmann’s drug, known as Retro-2, not only saves mice from death by ricin, it also defends them against a related class of poisons called Shiga-like toxins. These are produced by disease-causing strains of the gut bacterium Escherichia coli and while less toxic than ricin, they can also be fatal. So Stechmann’s new discovery is a two-for-one defensive deal. Both ricin and Shiga-like toxins have similar structures. One half of each protein – the A subunit – does the killing. It irreversibly breaks ribosomes, the factories that cells use to produce new proteins. A single ricin protein can knock out 1,500 of these factories every minute and without the ability to create new proteins, our cells perish. But a weapon is useless if it can’t be fired in the right place. Getting the A subunit into range of the ribosomes is the job of the other half of the protein – the B subunit. It’s a backstage pass that sticks to docking molecules on the surface of our cells and allows the entire protein to be smuggled inside. Once there, it gets shuttled from one structure to another until it reaches the endoplasmic reticulum, where ribosomes live. If you block this chain of transport, you neutralise ricin and Shiga-like toxins; after all, the proteins cannot destroy what they cannot reach. And that’s exactly what Stechmann’s team has managed to do. Stechmann, working with a large team of French scientists, scoured a library of over 16,000 potential drugs for any candidates that could protect cells from ricin. Modern technology allowed him to simultaneously test all of these chemicals on ricin-treated cells. To see if they worked, Stechmann gave the cells a radioactive amino acid; those that managed to incorporate this gift into new proteins were clearly shrugging off ricin’s ribosome-killing efforts. The result of this “high-throughput screening” is the beautiful image below. The green band at the bottom is a baseline of death – it represents the no-survivor aftermath when human cells meet ricin. The yellow band at the top consist of control cells that are all still alive – that’s what you’d ideally be aiming for in terms of an antidote. The red dots represent what happens when the cells were treated with each of the 16,000 drugs. The vast majority are hovering at the green level, because most of the chemicals didn’t work. But you can clearly see that at least six of the drugs had a positive effect – these red dots stand out from the crowd, flirting with survival. 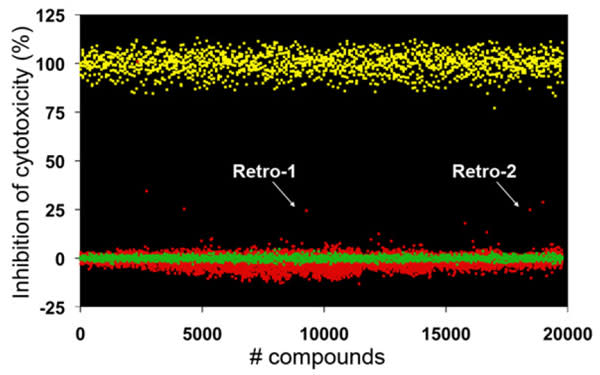 Stechmann decided to pursue two of these molecular guardians, Retro-1 and Retro-2 – they had the winning combo of protection against ricin and few side effects of their own. And to top it all off, the compounds worked against Shiga-like toxins too. In laboratory cells, these drugs only partially protected against death by ricin but, surprisingly, Retro-2 actually did much better when it was actually tested in mice. Even when Stechmann used a dose of ricin that would normally kill 90% of mice within three weeks, small doses of Retro-2 managed to save half the animals and larger doses protected all of them. Neither Retro-1 nor Retro-2 works by actually affecting the toxins themselves; instead, they just stop them from reaching their destination. By acting on the host rather than the invader, they could work against many other threats and it should be harder to evolve resistance against them. For now, it’s not clear how exactly the two drugs prevent ricin and Shiga-like toxins from reaching their killing grounds. This is the big question that needs to be answered; doing so will allow scientists to develop Retro-2 into an even more effective anti-ricin drug. Reference: Cell http://dx.doi.org/10.1016/j.cell.2010.01.043More on new drugs: