Fear of a white planet 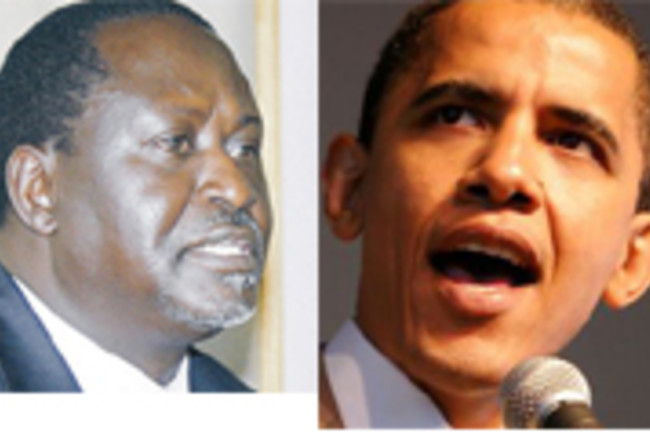 One of the main facts about American life is hypodescent, "the practice of determining the lineage of a child of mixed-race ancestry by assigning the child the race of his or her more socially subordinate parent." Barack Obama & the Kenyan politician Raila Odinga (who, probably falsely, claims to be Obama's first cousin) are both "black," despite the fact that when compared to each other Obama's substantial European ancestry is rather clear. I recall years ago watching the Oprah Winfrey television show where they were discussing the issue of self-hatred with a young black woman who was attempting to become impregnated by a white man (any white man) so that her children would "look white" and be beautiful. An adoption counselor rose up and told this young woman that her agency had many biracial children who they were attempting to place, and "none of them look white, they all look black." The clear and present background axiom here is that the power of black phenotype ensured the futility of this young woman's "quest." In hindsight it seems to me that these perceptions are mostly socially constructed. Years ago I had a friend who was of mixed European and Japanese origin who was raised in Japan. I recall once that someone stated that they were surprised that her father was a white American, as she looked "totally Japanese." My friend got irritated, and replied that that was rather interesting as growing up in Japan people would tell her how white she looked. Obviously these sorts of gestalt perceptions are scaffolded by social context; in Japan my friend's white characteristics were very salient, while in the United States her Japanese ones were. The norms of reference were socially conditioned, so the scaling of phenotype did not have a linearly proportional effect on perception in identity. In other words, a rather small absolute physical deviation from the social norm can elicit strong relative perceptions of difference. All that being said, phenotypes do not emerge just out of our own minds, rather, they often genetically controlled. I have posted a fair amount on skin color because within the last 5 years we've really figured out how it shapes the normal range of human variation. In short, about half a dozen loci seem to account for nearly all the between population differences in complexion. But I was talking to a friend today and explained how I realized recently that the nature of the genetic architecture was actually rather counterintuitive from an American perspective. In short, whiteness is dominant! More precisely, I noticed that two of the loci of largest effect, SLC24A5 and KITLG, manifest a dominance component in terms of lightening skin color. In other words, if you took a West African and a Northern European their offspring would exhibit a lighter complexion than you would expect from simply blending the two phenotypes. Here's a table to illustrate what I'm talking about:

In the case of SLC24A5 an ancestral guanine base mutated into an adenine at a particular position. For KITLG the reverse occurred. These changes resulted in an operational loss of function in relation to the melanin production for humans so that skin became lighter, and the variant was picked up and driven toward fixation among Europeans by natural selection. The table above illustrates the values of decrease in M index as you substitute an allele on the locus; as you can see, there are diminishing returns. This means that the heterozyogte state is closer to one than the other when taken against a genetic background. Fortunately for us I don't need to get into statistical assumptions about averaging when comparing Europeans and Africans when it comes to skin color genes; the two populations have very different genetic backgrounds in reference to the variance we're interested in. For SLC24A5 Europeans and West Africans exhibit disjoint allelic states, almost all Europeans carry the derived variant, while almost all Africans carry the ancestral. For KITLG the numbers are not as extreme, with each population having an 80-95% proportion for the major allele, but the minor allele frequencies are rare enough that its homozygotes are extant on the order of 1%. In other words, if an African and a Northern European produced offspring chances are they would be heterozygotes on these loci. We know that West Africans average around 60 for their M Index, while Europeans around 30. That's a 30 unit spectrum. Adding up the unit effects above you see that SLC24A5 and KITLG account for 16 of them, in other words, over half of the between population variation in skin color in regards to West Africans and Europeans can be attributed to differences on these two genes! Let's assume that additivity and independence apply to the 14 units not accounted for by these two genes. What does the dominance effect manifest on SLC24A5 and KITLG tell us in regards to the expectation for the offspring? I'll avoid descripition and make recourse to illustration:

This surprised me. The reason is that the emergence of light skin seems to be a case of a loss function mutation. Europeans and East Asians have been subject to sweeps which selected for lighter skin within the last 20,000 years, and these sweeps tend to be independent. This is what you would expect from simple loss of functions which constantly occur in the genetic background of the population, but are normally purified because they are deleterious. In contrast, the genetic architecture for very dark-skinned peoples is very similar; the skin color related genes of Bougainville Islanders show identity by state with those of Africans, though these populations are not closely related (Bougainville Islanders are more closely related to East Asians than the typical African since the former are both descended from a Northeast African ancestral population). It should be noted though that the dominance effect would definitely aid in the spread of these alleles through a population because of their immediate exposure to selection due to their strong expression in heterozygote genotypes. I think this is all rather interesting because at least judging from emails I receive the general perception is that dark skin is a dominant trait. This is true, if you bin the phenotypes into "dark" and "white," so that the latter only includes complexions around a narrow range of 30 melanin units. In contrast, when you examine the issue quantitatively it doesn't turn out that way at all. At a coarse first glance a blending/additive model seems to be appropriate for modeling skin color as a quantitative trait, but upon closer inspection dominance effects need to be noted. Instead of being buried in a rising tide of color, a panmictic world would exhibit a stronger effect of au lait. Next time someone brings up the blondes going extinct meme, you might want to point this out (after explaining the nature of the expression of complex traits in diploid organisms first of course). Note: The numbers I used for the back-of-the-envelopes here can be found in these papers.... SLC24A5, a Putative Cation Exchanger, Affects Pigmentation in Zebrafish and Humans cis-Regulatory Changes in Kit Ligand Expression and Parallel Evolution of Pigmentation in Sticklebacks and HumansSkin pigmentation, biogeographical ancestry and admixture mapping