FDA Report: Fish Is Good for Brains Despite Mercury Risk 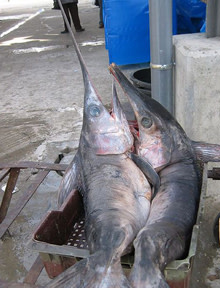 The health benefits of eating more fish outweigh the risks of mercury poisoning, according to a new Food and Drug Administration (FDA) proposal that would revise current federal seafood advisories. The proposal is drawing fire from the Environmental Protection Agency (EPA) and environmental groups that accuse the FDA of pandering to the seafood industry. Richard Wiles, director of an environmental advocacy group, said,

"This is an astonishing, irresponsible document...It's a commentary on how low FDA has sunk as an agency. It was once a fierce protector of America's health, and now it's nothing more than a patsy for polluters" [Washington Post].

Currently, the government advises young children, pregnant women, and women of child-bearing age to restrict overall fish consumption to 12 ounces per week and to avoid

shark, swordfish, king mackerel and tilefish, which are known to have particularly high mercury levels. Mercury in the environment accumulates in fish and studies have linked the element to developmental problems in fetuses and young children as well as cardiovascular disease in adults. However, the new FDA report says recent studies suggest

"a beneficial impact on fetal neurodevelopment from the mother's consumption of fish, even though they contain methylmercury...The net effect is not necessarily adverse, and could in fact be beneficial" [AP].

The report argued that nutrients in fish, including omega-3 fatty acids, selenium and other minerals could boost a child's IQ by three points [Washington Post]. The new analysis places ideal fish consumption—for optimal IQ-boosting—somewhere above 12 ounces per week.

has fired off a memo to the White House calling the 270-page FDA study "scientifically flawed and inadequate" and an "oversimplification" lacking analytical rigor [AP]. Environmental groups and Democrats in Congress have labeled the FDA proposal as a

sneak attempt to undercut important public health advice in the waning hours of a Bush administration that has treated science as a stepchild [AP].

President-elect Barack Obama supports tougher mercury regulations. Not surprisingly, the FDA proposal has strong backing from the seafood industry which has complained that the current advisory is scaring women away from eating fish. In sharp contrast to the criticisms, a spokesman for the National Fisheries Institute praised the FDA proposal:

"This is a science-based approach," he said. "And you start to see a picture emerge that shows the clear benefits of eating seafood outweigh the risks of a trace amount of mercury in fish" [Washington Post].

The FDA and EPA have battled for years over mercury regulations. Both agencies play separate but overlapping roles in informing the public about mercury risks.

The EPA investigates and regulates mercury and other contaminants in recreationally caught fish, while the FDA regulates mercury in seafood sold in markets and restaurants. States rely on the federal agencies in issuing their own advisories [AP]. A spokesman for the FDA said the current proposal is only in draft form and no official changes will be made until public comments are carefully considered.

Related Content: DISCOVER: Our Preferred Poison, mercury is everywhere DISCOVER: Do You Really Want to Eat That Tuna?