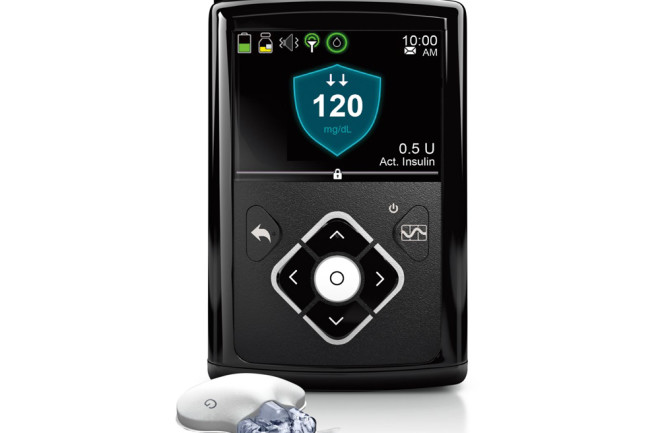 The MiniMed 670G hybrid closed-loop system. (Credit: Medtronic) "My guess is that even Medtronic is surprised." So said Jeffrey Brewer, the visionary tech entrepreneur who has been leading efforts to bring an artificial pancreas to market for a decade, in response to the unexpected news on Sept. 28 that the Food and Drug Administration approved one developed by Medtronic, already a leading manufacturer of insulin pumps. A mere two weeks earlier, results were released of the largest and longest study yet of the device that fuses two existing technologies — an insulin pump and a continuous glucose monitor that measures blood-sugar levels 24/7 — together with a computer algorithm that permits automatic delivery of insulin for people with type 1 diabetes. The most severe form of the disease, type 1 diabetes is diagnosed when a person's biological pancreas stops producing nearly all insulin. As described in Discover in an article published just five months ago, the artificial pancreas is as small as a cell phone and worn externally, with thin tubing inserted beneath the skin and changed out every few days. The new study found that Medtronic's device kept people with type 1 within their desired blood-sugar range 72 percent of the time, compared to 67 percent of the time when controlling their own insulin dosing. That may not seem like much, but it comes without the person having to fuss over how much insulin to take, a huge benefit when dealing with a lifelong illness.

Convinced by the study results, the FDA approved Medtronic's device, called the MiniMed 670G hybrid closed-loop system, for people with type 1 diabetes who are 14 years of age and older. It ordered the company to conduct continuing studies of the device once it goes on sale. As the "hybrid" part of the name implies, the device is not fully automatic. Diabetics will still have to type in the amount of carbohydrates they're eating at every meal. The device will then calculate and deliver how much insulin it thinks is necessary based on the person's current blood-sugar level and prior history of responses. So quickly did the FDA approve Medtronic's application that the company said it will not begin selling it until the spring of 2017, to permit manufacturing readiness, coverage by at least some health insurers and training of its employees, who in turn will have to train doctors and patients in how to use the device.

Getting It All Started

Brewer kick-started the drive toward bringing an artificial pancreas to market 10 years ago, when his son was diagnosed with type 1 diabetes. Flush with cash from the sale of an online company he'd started, Brewer made an audacious offer to JDRF, the non-profit group (formerly known as the Juvenile Diabetes Research Foundation) that funds research toward curing type 1: Begin focusing on the artificial pancreas, and he would donate $1 million. Not only did JDRF say yes, but it soon appointed Brewer its president. Under his leadership, JDRF convinced manufacturers, academics and the FDA to stop dithering (the systems that had been under plodding development since the 1970s) and get serious about putting one in the hands of diabetics. After the FDA established what it called a "road map" toward getting a device approved, Brewer left JDRF two years ago to start an artificial pancreas company of his own. Together with Bryan Mazlish, a programmer whose previous gig was designing computer algorithms to buy and sell stocks, and Lane Desborough, who was then Medtronic’s chief engineer for diabetes, they formed Bigfoot Biomedical. "Medtronic's approval is very good news for us," Brewer told Discover. "It shows that the FDA understands the need for these devices and isn't going to delay their approval."

The Best is Yet to Come?

He adds, however, that in his view, the Medtronic device is not what people with type 1 diabetes really need. "It's the old-school approach of having to count your carbs and enter them into your device," he said. "And you don't actually start on closed-loop therapy. You start off like with current technology, calculating everything yourself, and then your endocrinologist trains you on how to use it on automatic."

The Bigfoot device, by contrast, requires meal alert but no carb counting, and no initial run-in phase. With over $30 million in funding so far, the company is now in the midst of its first, preliminary clinical trial, and plans to launch a trial large enough to win FDA approval next summer. If all goes according to plan, Bigfoot's device would be on sale by 2018.

last year, said he also welcomes the news of Medtronic's approval. Like Brewer, however, he also has his own views on how the best device should function. Damiano's device, the iLet, is designed to pump not only insulin, but also the hormone glucagon, normally released by the liver when blood-sugar levels go too low. "Glucagon is a freight train that's coming," he said. "The insulin-only devices are great. They're a huge step forward. But the addition of glucagon makes all the difference." So far, Beta Bionics has raised $1 million through crowd funding from hundreds of individual donors and $5 million from pharmaceutical giant Eli Lilly and Company. It has also applied for a $15.5 million grant from NIH to run the large clinical trial aimed at gaining FDA approval.

The iLet device. (Credit: Beta Bionics) At the University of Virginia, meanwhile, Boris Kovatchev, professor and director of the Center for Diabetes Technology, received a $12.7 million grant from NIH to lead an international trial of yet another artificial pancreas system. The study

involves nine universities, including the Joslin Diabetes Center, Harvard, the Mayo Clinic and Stanford. The trial, starting this fall, will be longer and larger than any other, involving 240 people with type 1, each of whom will wear the device for six months. The resulting device will be marketed by a company named Type Zero. For his part, Brewer says he is not disappointed by the progress of his competitors. "I never thought it was a race," he said. "We're focused on getting it right." As the first to cross the finish line in this non-race, then, Medtronic has plenty of company as it seeks to make life for people with type 1 diabetes safer and easier.