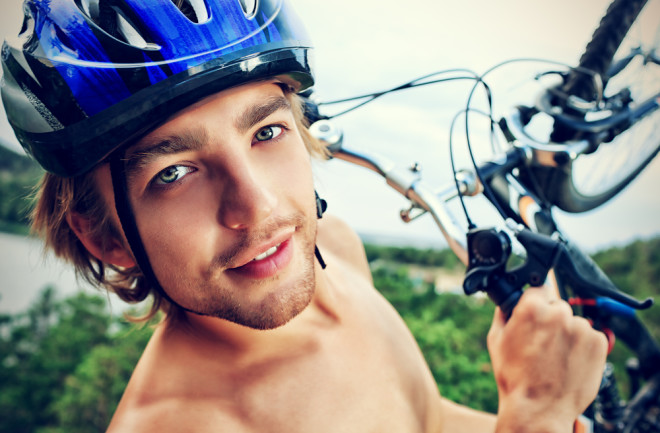 Shirtless for aerodynamics' sake, of course. Credit: Kiselev Andrey Valerevich / Shutterstock We all know the more attractive among us get all the breaks, but science has just shown one more benefit to being really, really, ridiculously good looking: riding a bike faster. No, really. A paper in today’s Biology Letters shows statistically that attractiveness correlated positively with performance among cyclists who completed the 2012 Tour de France, especially among women not using hormonal birth control. And you thought science was boring.

As the paper’s abstract explains, “Females often prefer to mate with high quality males, and one aspect of quality is physical performance.” So the more physically fit a human male is, the more human females might want to bang him. But how to test for this — and, specifically, how to test for this with the measure of physical performance being endurance, a trait not easily quantified? Simple. Just get headshots of 80 male cyclists who finished the grueling Tour de France, put them up on www.fluidsurveys.com, and have people rate them on a scale of 1–5 (5 being the dreamiest). Then, compare the cyclists’ hot-or-not ratings with how they did in the race. Sole author Erik Postma also asked the participants to rate the man's masculinity and likeability, and asked whether the rater, if female, was on hormonal contraception. The results were clear. The most attractive men were also, unbeknownst to raters, the riders that performed best. This correlation was strongest in women not on the pill. (The effect was about the same for women on it and men, interestingly enough.) A rider’s perceived masculinity didn’t seem to have anything to do with his performance; there was a positive relationship between performance and likeability but it, too, was mostly dependent on the guy’s looks.

Postma speculates the relationship between attractiveness and racing ability might arise from one of two things. Perhaps both performance and looks are due to something more fundamental, like general health or a competitive personality, which would certainly be abundant in Tour de France finishers. Alternatively, Postma writes:

Facial attractiveness may signal endurance performance in particular. Indeed, high endurance performance is thought to have been the target of selection in early hominids, as being able to efficiently cover large distances allowed for more efficient hunting, gathering and scavenging, resulting in a number of uniquely human adaptations.

In which case it’s no wonder we find high-endurance athletes attractive, because humans have just been bred to think that way. A neat finding, to be sure, but remember the data only point to a general trend. So don’t hang up those bike cleats just yet, ugly guys — beauty might be in the eye of the beholder, but nothing’s sexier than winning.