Sales of plant-based meat alternatives have been skyrocketing since March. But their growing presence in grocery stores likely won't get the average American to give up animal products. 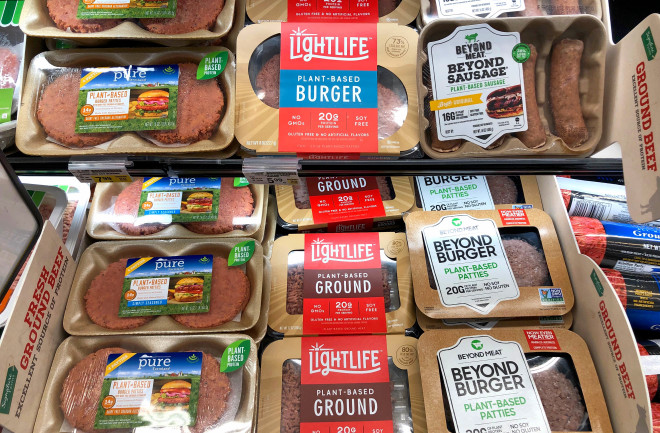 Maybe you’re trying a meatless diet, or simply couldn’t find ground beef at the store in the last few weeks. Maybe it was love at first bite when you tried a plant-based burger at a local restaurant, and you had to go buy your own patties. Whatever the case, Americans are consuming more meat alternatives than ever before.

More specifically, plant-based alternatives are experiencing an uptick in sales that started even before the coronavirus pandemic hit. But in March, sales of meat alternatives jumped another 264 percent — not only due to popularity, but an increase in distribution as well.

Meanwhile, reports of COVID-19 spreading through meat processing plants have caused some to temporarily close their doors. As of June 8, over 7,100 Tyson Foods employees had tested positive for the novel coronavirus. The supply chain has been stunted in some areas, leaving farmers with a surplus of animals ready for slaughter, and no choice but to kill and dispose of them.

So, is this fake meat’s big break? The high sales rates look promising, and the products could help keep shelves full when beef and turkey burgers are low in stock. But food industry experts such as Mark Lang, an associate marketing professor at the University of Tampa, say this once-in-a-lifetime set of circumstances likely won’t cause the average person to fully give up on meat.

“Meat eaters are still the largest part of the population,” he says. A 2018 Gallup poll found that only 5 percent of adult Americans identify as vegetarians — a 1-percent drop from a previous poll in 1999. But that doesn’t mean meat eaters aren’t willing to compromise. Rather, plant-based meat companies might have to find better ways to meet their potential customers in the middle instead of encouraging them to give up animal products altogether.

Meat substitutes can come from several plant-based sources — soy, jackfruit, beans or fungi, to name a few. In the cases of brands like Impossible Foods or Beyond Meat, patties get made from textured soy proteins and are made to look like their animal-sourced counterparts. Still, the term “plant-based” might be misleading in terms of health benefits: In terms of nutritional contents, processed meat alternatives really aren’t much better for the body than traditional meats.

But unlike meat production, which results in enormous outputs of greenhouses gases, plant-based alternatives have been shown to be easier on the environment. About 14.5 percent of all human-produced greenhouse gas emissions comes from animal agriculture, thanks in part to the methane produced by ruminant animals such as cattle. A 2019 study in Science found that dairy farms emitting the smallest amounts of greenhouse gases still created 36 times more pollution than the average farm that produced peas.

Even the products that emit the smallest levels of greenhouse gases, such as poultry and eggs, still exceed emissions from vegetable products. And despite beef’s hefty impacts on the environment, it actually contributes a very small amount to our dietary intakes — only 37 percent of total protein consumption and 18 percent of total calories.

Helping the environment is a central part of the marketing for Beyond Meat and Impossible Foods. Both companies say making a positive impact on climate change is a central part of their mission. But even though this goal would seem naturally appealing to any climate-conscious consumer, Americans aren’t always the best at putting Earth first on their list of priorities when it comes to choosing what they eat — even if they do care about the environment.

Meat is a deeply rooted part of American culture, and it’s not easy to get people to permanently change their eating habits, even if it’s touted as a move for the greater good.

“People can jump on and off diets, and they do all the time,” Lang says. “But staying on a changed diet is really hard for people to do, especially when things are framed as ‘you have to give this up,’” as it often is in the case of meat alternatives.

Rather, Lang says, getting consumers to decrease their meat consumption in order to curb climate change may require a compromise. Enter the blended burger — a mix of meat and vegetables ground into a patty designed to look just like its all-beef counterparts.

In a January report in the journal Food Quality and Preference, Lang surveyed 602 American adults on their impressions of a burger made of a beef-and-mushroom blend. The respondents were asked to rank their reasons for trying the burger based on factors such as taste, health benefits, environmental sustainability, price and novelty. Most respondents ranked health benefits as their top reason for trying the burgers. But, to Lang’s surprise, environmental sustainability was last on most respondents’ lists.

"[Consumers] might say 'I'm trying to help the Earth and improve my diet at the same time,'" he explains. "But when they’re forced to make trade-offs, it’s really, 'I want to improve my diet and my health, and if I can save the environment, that’s good, too.'" To Lang, that’s the big takeaway — that your own health comes first when choosing foods, then the greater good of the environment. And if it requires too great of a sacrifice, then you might opt for an easier choice.

Lang suspects the era of fake meat is still very much in its early stages, despite the current high sales of plant-based alternatives. Right now, current marketing tries to sway customers to make a “switch” to plant burgers, which could alienate some consumers who aren’t gung-ho about giving up meat completely.

"This gets framed in the media as an all-or-nothing proposition: It’s either meat or no meat," Lang says. He acknowledges that lowering meat consumption in the average American’s diet is still an important move to curb climate change, but could likely be done in smaller increments. Plant and meat blends could be the bridge to a more sustainable diet — allowing customers to enjoy a product with a smaller quantity of meat, and, therefore, a smaller carbon footprint.

"We’re learning that people want things to be easy, simple and small," Lang says. "People have a very difficult time making significant or drastic changes to their diet and their eating habits."

As for the soy patties at your local grocery: They likely won’t be flying off the shelves like bratwurst on the Fourth of July. But over time, we could see products marketed more to meat-loving Americans who want to add more plants to their diet, while still being conscious of their carbon footprint.