Conjunctivitis, that infamous, sticky-itchy-oozy infection of the eye, can strike anywhere and anyone. For the most part, however, pink eye sticks to its preferred domain, afflicting youthful targets in schoolyard haunts where the infection spreads from dirty little hand to once-clean little eye with the tenacity and enthusiasm of wildfire. Though wholly reliant on direct inoculation to the eyeball, it is easily transmitted, whether by the sticky digits of children unfamiliar with good hygiene or via errant eye gunk inadvertently smeared on a communal surface.

But banal as conjunctivitis may be, it can surface in unpredictable and surprising ways due to its success as a highly contagious infection caused by either bacterial or viral organisms. One interesting testament to these organisms’ success is evident in the case of a group of very pink-eyed American healthcare workers traveling to Fiji for a medical conference and scuba diving trip in 2006 (1). 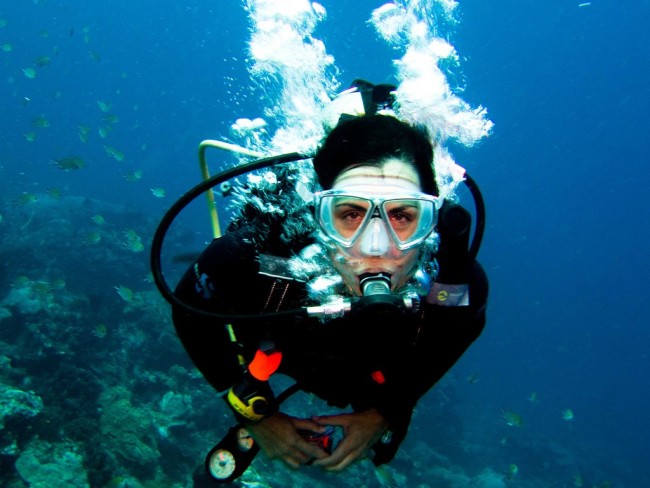 A scuba diver in their natural environment. Image: Ilse Reijs and Jan-Noud Hutten. Click for source.

Fiji is composed of hundreds of tropical islands scattered over seven-thousand square miles of the South Pacific ocean.

It is a region home to a rich diversity of marine life and thousands of square miles of coral reefs, and it has been deemed the “soft coral capital of the world."

In 2006, twenty-nine American healthcare professionals visited the island of Vitu Levu to attend a medical conference and slip in some recreational diving because, hey, two birds, one stone, et cetera. In the off-hours following the conference, 27 of these individuals took to two separate dive boats off of Vitu Levu.

On the third day of diving, the first complaint of something amiss surfaced. A diver reported some the sensation of grit in the right eye, accompanied by a purulent discharge, edema of the eyelid, and tearing. Three other individuals soon reported similar symptoms and a nascent outbreak of conjunctivitis was diagnosed by an attending emergency medicine physician.

The outbreak would snowball as fourteen cases were diagnosed over a period of six days, all blinky, squinty, itchy-eyed victims having been scuba diving compatriots on the same boat. During the outbreak, a physician recorded the pertinent data of the outbreak, recording the symptoms and making the diagnosis of an acute outbreak of conjunctivitis. All were treated with antibiotic drops and the infections quickly resolved, pointing to a bacterial etiology.

After a dive, most divers will rinse their scuba masks in a communal bucket of fresh water to rinse off the salty seawater and prevent corrosion of the mask components. An epidemiological investigation into the outbreak identified the communal rinsing tanks as the main mechanism of infection, jumpstarted by the Fijian dive master and boat operator who later admitted to having battled an eye infection just prior to the outbreak.

The divers rinsed their masks in a petri dish of a rinsing tank, coating their masks and their fingers with the bacteria, providing an ideal opportunity for conjunctivitis transmission. Ordinarily, rinsing equipment communally poses no problems to the overall healthcare of your scuba buddies, but, in the event of an outbreak, an extremely contagious organism will leave no opportunity overlooked - your plans for that holiday in paradise be damned.

Gnat so fast! You can get conjunctivitis from "an insect almost as maddening as conjunctivitis: those teeny flying obstructions that seem to dive-bomb open eyes and gaping mouths with remarkable accuracy." From the Body Horrors archives: Fingers, Flies, & that Old Pink Eye.