Evolution, why it still happens (in pictures)

Yesterday I attempted to rebut Steve Jones' ridiculous contention that evolution is going to stop in the modern West. Sometimes it is difficult to really know when to start, especially when your interlocutor seems to be in "incoherent spray arguments mode." Some of the commenters also noticed the internal lack of consistency in the model which Jones was putting forward. But saying it is a model is being overly generous. In short, Jones' most solid (that is, least vague) claim is that reduction in the number new mutations being added to the population every generation is decreasing because men are having children at younger ages, on average, than in the past. Why focus on men? I noted the evidence that new mutations are about an order of magnitude more common in sperm than in ova; the reason being that sperm is produced in massive quantities through serial replication which introduces more error into the transmission process cumulatively. Of course I have to add that Jones' argument here is weak because the extant historical and anthropological does not support his contention. Part of the problem here is that Jones is good at throwing out buzzwords and sound bites. After all, most people "know" that evolution is about "survival of the fittest" and that nature is red in tooth and claw. Therefore, it naturally stands to reason that when mortality declines evolution will be a weaker force. I think the problem here is that our conception of evolution is focused too greatly on proximate modes and large scale dynamics. That is, selective high mortality rates are a "common sense" way in which the "weak" can be weeded out from the "strong." But what about the extremely high human spontaneous abortion rates? Evolutionary biologist Mark Ridley has argued that increased miscarriage rates will "balance" out the fact that more individuals with deleterious mutations are reproducing today than in the past. Selection therefore occurs in utero; we don't observe it so it is not salient to us. But it is selection nonetheless. In any case, my friend Aziz Poonawalla, a physicist by training, offered up his own model/conception of evolution. Being a physicist he was clear and formal in his exposition. I told him that the best way to think about evolution would be changes in state of the genome as a function of time. Or, more traditionally, changes in allele frequency over time. This is a "classic" definition which emerged during the early phase of theoretical population genetics. Many would quibble with it, claiming that the nature of higher order genetic architecture is critical and obscured by focusing only on proportions of alleles. I will concede that this is the the more thorough definition of biological evolution. But the changes in allele frequency definition is clear enough that I think using it as a starting point is sufficient to clarify why Steve Jones' contentions are problematic on the face of it. This is what many people think evolution is: 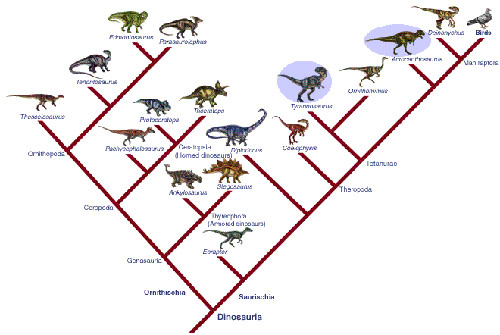 And they're right. But, this is an end outcome of many lower level processes. Creatures don't magically transmute into each other. I believe that part of the issue is that people conflate evolution with species phylogenies and concurrent morphological transitions. This is the extension of the evolutionary principle, but it is not the atomic unit of evolutionary theory. To understand chemistry you need to go beyond a simple periodic table. It is important to know the difference between oxygen and hydrogen, and to note character clusters of elements such as reactivity (halogens vs noble gases). But at the end of the day you need to model chemical processes as occurring via the dynamic interaction of protons, neutrons and electrons (e.g., covalent bonds), as well as atoms as units with different characteristics (e.g., ionic bonds). So on a fundamental level, this is evolution: Parent ...ATCTCTCTCGCGCAATGCGC... Child ....GTCTCTCTCGCGCAATGCGC... Note that I changed the first base pair; that's a transition. When you look at a phylogeny illustrating the tree of life with organisms of all shapes, sizes and colors, this is the ultimate process undergirding it. Once this type of process (and I want to reinforce that though I'm focusing on sequence level base pair substitutions I grant there are many other types of changes which can occur within the genome) is understood to be the root from which evolution emerges the sort of assertions Steve Jones' makes begin to lose their force, because now you can start inferring from first principles and check the "experts." On the level of the DNA sequence it is generally assumed that most evolution is neutral; that is, most of the change is due to random processes. I will avoid talking more about neutral processes to focus on selection. Not because selection is more important than neutral processes, but because I don't want to discuss something like sampling error, and I think it speaks most forcefully to Jones' common sense observation that without a great deal of pre-reproductive mortality there can be no natural selection. Consider a human population. Each individual has two copies of each gene. Let's stipulate that there is 0 mortality before the age of 50. Assume discrete generations. 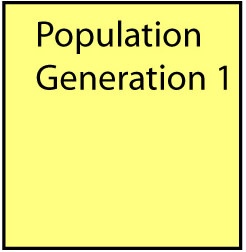 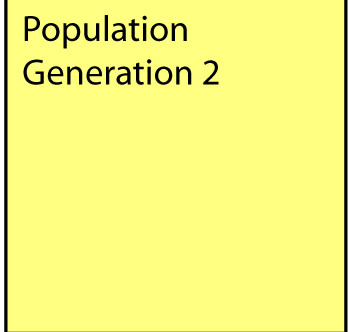 Now the size of the square is doubled. That means there are 2N individuals. Generations are discrete, so all the individuals from the previous generation no longer exist within the population. The population has doubled, so that implies that many parents from the previous generation reproduced above replacement. We know that on average each woman bore 4 children. According to Jones' logic there is no death in the subsequent generation, so there could be no natural selection. I'll address that later, but let's move to the next image. 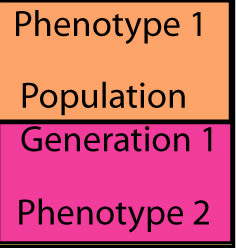 Again, you see the population in generation 1, but now I've placed more information in the image. This is the ratio of the states of a phenotype, specifically two states, phenotype 1 and phenotype 2. So the population varies, on this particular trait it is separable into two classes. 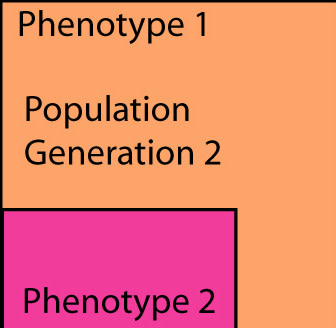 Now you see the population in generation 2 again. But you notice something interesting: the ratio between the phenotypes has shifted. In the first generation the ratio was 1:1, but in the second generation the ratio is 3:1. If there is average phenotypic change like this across a generation, one might adduce that evolution is occurring. But we do not know that for sure. 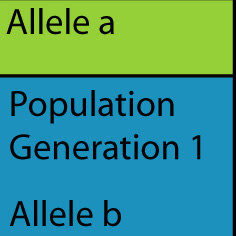 Now you're looking at a square which depicts the proportions of various alleles, genetic variants, on a locus, a genetic location. By fiat magic I will tell you that this gene codes for the phenotype above. The first thing you might notice is that there are more alleles "b" in the population than alleles "a." At this point I will tell you that the population is at Hardy-Weinberg equilibrium; so the frequencies of the genotypes are as follows: aa = 0.09 ab = 0.41 bb = 0.5 From this, you should infer that "a" is dominant to "b." "aa" and "ab" are phenotypically equivalent and result in phenotype 1. Only "bb" results in phenotype 2. 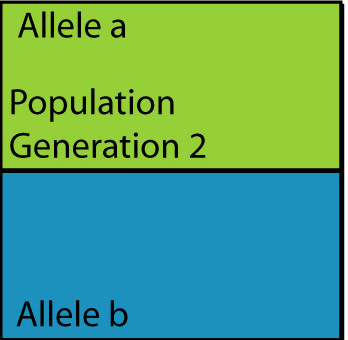 These are now the allele frequencies for generation 2. By the simple definition above you should conclude that evolution has occurred between these two generations. The frequencies or proportions have changed. Because allele "a" is dominant to allele "b," phenotype 1 has increased greatly in proportion even though the alleles are at parity. The genotypes are: aa = 0.25 ab = 0.50 bb = 0.25 Therefore, you see that phenotype 2 is now 25% of the population. I told you that evolution is change in allele frequencies, but in a more common sense manner you also see that there is a change in the phenotype or trait value. The phenotypic change in evolution is not mysterious, it is simply an expression of genetic information. Selection operating upon the phenotype may alter the ratio of genotypes over the generations. This selection may operate through viability (miscarriage), mortality (death) or differentials in fitness. Obviously in my example above individuals who carried allele "a" were more successful in reproducing than individuals who carried allele "b." This is because phenotype 2 only replaced itself, while phenotype 1 increased both in raw numbers and as a fraction of the total population. Instead of mortality, selection operated by pushing the variance upward. Do note though that because many copies of "b" are carried by those with phenotype 1 (heterozygotes), so the increased fitness of individuals with this phenotype did not accrue in benefits only to copies of "a" (though it did disproportionately). Here is a cartoon illustration: 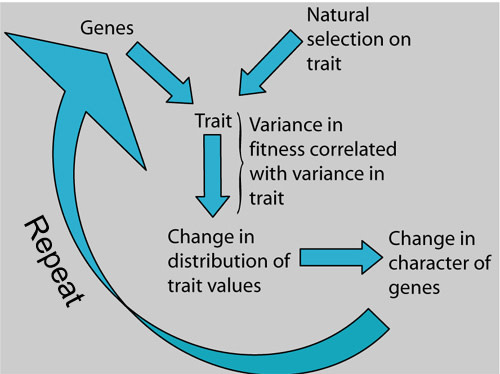 As they say, "rinse and repeat." Obviously death of individuals who carry particular genes is a really efficient means of producing reproductive variance which correlates with genetic variance. But, it is not the only way. In fact, from an evolutionary perspective an individual who does not reproduce might as well be dead. The only mitigating factor here is inclusive fitness. Note here that for evolution to occur the selection must operate upon a trait whose variation is controlled by genes. This does not mean all the variance must be controlled by genetic variance. Nor does it mean that the reproductive variance has to have a particular shape. The key is simply that there are differentials of reproduction, and those differentials have some relationship to the genetic character of the individuals reproducing. Those of you who know evolution realize this is way too simple. And I didn't really address stochastic aspects of allele frequency change. But, even with the "toy example" above I think I have illustrated why Steve Jones' buzzwords should fall flat. We know that different types of people have different numbers of children. We know some people are sterile while others are very fertile. One could posit that there is no correlation between genes here, but I am skeptical that this is the case. Just because half of children do not die before the age of 5 does not mean that selection no longer operates through sorting genes which result in phenotypes that entail varying reproductive output.