Everything Worth Knowing About ... Microbiomes 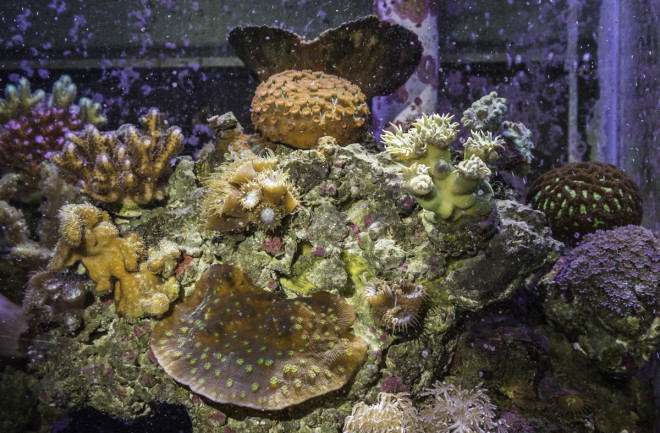 More than a dozen species of coral from around the world occupy a tank at Oregon State University. Biologist Virginia Weis is studying them to learn more about their microbiomes — the microorganisms that are key to corals' survival. | Jack C. Koch/Department of Integrative Biology/OSU

Inside a dim laboratory at Oregon State University, a glass tank full of living corals glows like a slice of sky during the grand finale of a fireworks display. These species would never share the same stretch of ocean in real life, but they have one important thing in common.

“All of these corals are symbiotic,” says Virginia Weis, who chairs the Department of Integrative Biology, peering into the tank with me. “Every single one of them has algae, and without that interaction they would bleach and die.”

The corals eat but don’t digest these single-celled photosynthetic algae, which then reside inside the corals and feed them the carbon sugars created during photosynthesis. In return, the corals not only give the algae a safe berth but also feed the algae nutrients.

A crescendo of evidence points to the central role of microorganisms — bacteria, viruses, fungi and algae — in the health of oceans, forests, soils, plants, humans and other animals. These tiny, essential life-forms make up communities called microbiomes, in which microorganisms interact and trade services with each other and their host organisms. The more scientists look, the more they discover that microbiomes are the beating heart of every ecosystem, large and small.

“It’s as if we’re looking up into space a couple of centuries ago and someone handed us the first refractive telescope,” says University of California, Los Angeles, microbiologist Jeffrey Miller. He co-authored a paper last fall calling for a major initiative to deepen our understanding of microbiomes. “What’s out there? What do all these microorganisms do, and how do they interact? Microbiomes are such a big part of us and our world, but they’re so unexplored.”

Tractors and combines separate the wheat from the chaff. Large-scale agriculture is changing the makeup of microbes in the soil, rendering it less biologically diverse. | Stockr/Shutterstock

Just as scientists begin to unmask the microbiome — they’re even working with the White House to launch a national microbiome research initiative — they’re realizing that many microbiomes are threatened. Modern diets, stress and medicines are changing the human microbiome and possibly placing some important bacterial species at risk. “With the loss of biodiversity due to antibiotics and other aspects of modern lifestyles, we may face a major microbial threat — I called it ‘Antibiotic Winter,’ ” says Martin Blaser, author of Missing Microbes: How the Overuse of Antibiotics Is Fueling Our Modern Plagues.

The same concern extends to ecosystems around the world, from farmlands, where large-scale industrial agriculture is radically altering the microbial life in the soil, to the Gulf of Mexico, where the Deepwater Horizon oil spill shifted the population of marine microorganisms. A recent study by Antonis Chatzinotas of the Helmholtz Centre for Environmental Research in Germany suggests that every species is important to the health of its ecosystem. He and colleagues exposed almost 900 combinations of soil microbial species to different environmental conditions and found that species that play a minor role in helping plants grow during good conditions can play a much bigger role if the environment degrades.

“High biodiversity is beneficial,” says Chatzinotas. “It doesn’t only provide a number of species with traits that might be important after the environment changes, but also provides partners that allow species to grow in these new conditions.”

Despite all the recent attention to microbial communities, the mysteries are still vast. It’s challenging to figure out exactly what microbiomes do and how they do it. “We are only starting to tease apart how this all works,” says environmental microbiologist Jack Gilbert, group leader for microbial ecology in the biosciences division at Argonne National Laboratory.

The timing could not be better to double down on this work, adds biologist Jo Handelsman, associate director for science at the White House Office of Science and Technology Policy.

“Some of the global changes we’re confronting are driven by microbiomes,” she says. “When people focus on microbiomes, we will find an even greater array of applications and solve problems we never thought were associated with bacteria and fungi.”

Scientists suspect that an ailing gut microbiome may be linked to illnesses as diverse as intestinal problems and depression.

Bacteria, once universally maligned, are now appreciated for their benefits to human and ecosystem health, but it took science more than 300 years to understand their true worth.

Late 1600s Dutch merchant Antonie van Leeuwenhoek, using microscopes of his own making, discovers “animalcules” bustling around in pond water, drops of blood and the scum from his own teeth.

1850s German microbiologist Robert Koch connects a bacterium to a specific disease — bacillus anthracis to the outbreak of anthrax in cattle — and figures out how to grow bacteria in agar cultures in a lab.

Late 1800s Dutch microbiologist Martinus Beijerinck shows that bacteria can be beneficial by explaining a phenomenon that farmers had observed for millennia: Planting legumes like peas or clover restores fertility to fields heavily planted with wheat and other crops. Bacteria inside the legumes’ roots convert atmospheric nitrogen into a form plants can use, fertilizing the fields.

Late 1970s Carl Woese (pictured below) introduces a new way to classify organisms that involves sequencing a slowly evolving gene, 16S rRNA, that all organisms share. This gives scientists a new tool for classifying bacteria. Before this innovation, scientists classified plants, animals and fungi by studying their features and relatedness, but “microbes don’t have many morphologies,” says biologist Margaret Mcfall-Ngai.

1990 Woese publishes a paper suggesting the two kingdoms of bacteria could be further divided into dozens of sub-classifications.

2014 Pablo Yarza and colleagues find that the number of bacterial phyla could be as high as 1,350.

In and on the human body, there are dozens, if not hundreds, of microbiomes.

Our microbiomes are relatively small when we are infants, but grow in both numbers and diversity as we interact with our environment. The foods we eat, the surfaces we touch, the people we encounter all affect our microbiomes. Our genome is an unchanging birthright from our parents, but our microbiome is a more plastic legacy, expanding from our mother’s starter kit of microbes with every experience.

Most of the microbes that inhabit the human body live in the gastrointestinal tract. Some 100 trillion microorganisms dwell there, the majority of which are beneficial. They weigh only a few pounds, but scientists think they have a huge impact on our immune system, metabolism, digestion, brain function and more.

Species found in the human gut include:

The mouth is the gateway to the body. The more than 500 species of bacteria that inhabit the mouth are a mix of friends and foes. While some are linked to problems like gum disease, others may be key to the health of the lungs and digestive tract.

Here are a few key species in the mouth microbiome:

The skin hosts a wide range of microorganisms, some of which provide essential functions that human genes can’t do. For example, scientists have found that Staphylococcus epidermidis, a beneficial bacterium, kills skin pathogens.

Health and the Microbiome

Scientists predict that human health will be revolutionized by the knowledge of how microbiomes work. Already, this research has led to a therapy called FMT, or fecal microbiota transplant. Stool from healthy donors is transferred to people whose microbiomes have been disturbed, often by antibiotic use, and have become infected by the bad bacterium Clostridium difficile. The beneficial bacteria repopulate the patient’s gut and restore the microbiome to health. FMT has a 90 percent cure rate.

While scientists have made great progress in identifying the individual members of the gut microbiome, it’s much harder to determine exactly what they do — both individually and in concert with other microbes. But researchers are beginning to find some clues. By chemically removing the gut microbiome in zebrafish in the lab and then repopulating the gut with two to three bacterial species, University of Oregon biologist Karen Guillemin has shown that certain microbes are especially skilled at suppressing the host immune system and preventing inflammation — a discovery she thinks may have implications for human health.

“Like zebrafish, we have this rich source of gut microbes that have figured out how to coexist with us and soothe the immune system,” she says, adding that “there is enormous potential to harness those mechanisms” to address ailments such as inflammatory bowel disease and other chronic inflammation.

[This article originally appeared in print as "Microbiomes."]