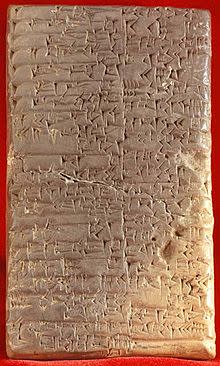 By this point you have probably read about Jonathan Franzen's comments about digital books. For example: “I think, for serious readers, a sense of permanence has always been part of the experience. Everything else in your life is fluid, but here is this text that doesn’t change.” This seems to be a recapitulation of the Lee Siegel's attack on the internet from a few years back. I don't think Franzen was copying Siegel, rather, he's channeling a meme which seems to be prevalent in a certain cultural milieu. Carl Zimmer does a excellent job dispatching Franzen's assertions on the merits. But I think we might benefit from a little historical perspective when evaluating these sorts of claims. After all, the book as we know it is the last in a long line of vessels for literacy. Five to three thousand years ago cuneiform was state of the art. And if you want permanence, look no further. The tablet to the left dates to 2400 BC! With the decline in cuneiform there is something of a lacunae in our understanding and memory of the literary production of ancient societies. Scrolls of papyrus can certainly keep, but only under ideal conditions (e.g., very dry climates, such as Egypt). The codex, the technology which we know as the book, is more recent than the scroll. But it too relies on relatively perishable materials in comparison to cuneiform. How is it that we have so much of ancient literature then? First, we don't. There are constant mentions of great works of Greek and Roman antiquity which were obviously widely circulated judging by the references to them in the works we do have. These background elements of the ancient canon were never copied down to our present era. Why is the copying so important? Shouldn't we have the originals? The Epic of Gilgamesh was retrieved from the remains of the library of the Assyrians (later literature mentions Gilgamesh, but for these earlier cuneiform copies we wouldn't have the full work from what I know). This is where the perishable aspect comes in. There are classical-era works whose original production dates back to late antiquity, but from what I have read our modern distillation of the ancient canon is almost entirely filtered through three great bursts of copying at the nexus of late antiquity and the early medieval period:. - The Arab effort during the early years of the Abbasid Caliphs in the 9th century. - The Carolingian Renaissance of the late 8th and early 9th centuries. - And a burst of activity as Byzantium recovered from its assaults by the Arabs in the 9th and 10th century, in particular under the patronage of Constantine VII. These endeavors were somewhat complementary. The Islamic transmission of great philosophical works is well known, but there was little interest from them in preserving the corpus of ancient Greek humanism, such as the works of the great playwrights. Rather, we have the Byzantines to thank for this. From this, combined with the Carolingian preservation of many Latin works, a reasonable picture of antiquity comes down to us today because of these three independent efforts. But only through the grace of contingency do we have this continuity. The literature of pre-Islamic Persia is lost to us. Why? Perhaps it never was. Or perhaps unlike the Greeks and Romans they did not generate cultural heirs who would patronize the perpetuation of their great works. Franzen's concern about the lack of permanence of digital formats has a real basis. But it's not a vague one predicated on some sapping of the Weltgeist. Rather, there is a chance technological civilization will collapse or retrench at some point in the future. Old fashioned concrete physical mediums not reliant on the "grid" may be necessary backups in that case to preserve memory of the past. Instead of fixating on the death of print, people who worry genuinely about the potentially ephemeral aspect of digital medium should start thinking like the Long Now foundation. Shakespeare on platinum cuneiform anyone?