Even Small Football Impacts Can Ring the Brain Like a Bell 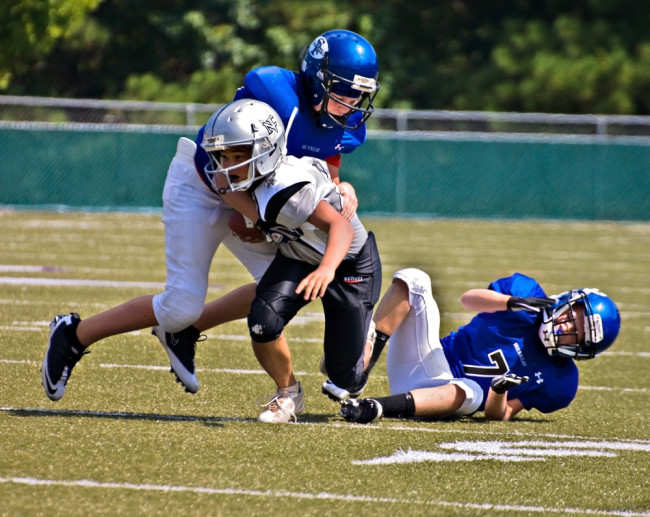 When it comes to head impacts, it's not just the hard-hitting blows that you should worry about. A new study finds that even small hits can cause the brain to vibrate dramatically inside the skull. Head injuries in sports have come into the spotlight in recent years. Brain trauma has been implicated in the suicides and domestic violence cases of several NFL players, and even the deaths of several high school athletes. As a result, parents and fans are becoming increasingly sensitive to issues of safety. Now, by developing a simple model of the brain and skull, researchers have shown that even mild impacts should not be taken lightly. These smaller hits can cause quite a bit of motion of the brain relative to the skull, through a phenomenon known as resonance. Much like when a tuning fork is struck and begins ringing with a specific tone, a small impact to the head can cause the brain to jostle a lot.

The brain is not rigidly attached to the skull, but is suspended in fluid and connected loosely through only a few nerves, some blood vessels, and the brain stem. When the head is struck — by a soccer ball, the helmet of an opposing lineman, or an airbag for instance — the skull responds first and the brain lags behind, as if attached by springs. The tension on these connections pulls on brain tissue, and could in turn cause damage. Previously, it was thought that the force of a hit was the main problem. As such, football helmets and airbags have been designed to spread out the impact over a larger area and diminish the overall blow. This strategy has indeed helped to reduce severe injury and mortality in sports and auto accidents. Nevertheless, there is mounting evidence that mild and repetitive impacts can add up to long-term effects.

To study how the brain and skull behave in response to impacts, researchers began with MRI data from a previous study. In that study subjects were placed face-down in an MRI machine with their heads supported by a trap door mechanism. When the door was opened their head dropped about an inch onto a pillow. All the while their skull and brain were imaged in the MRI. In this study, researchers wanted to simplify the complex 3-D motions of the brain-skull system. They created a computer model that treats the brain as a single mass attached by a spring to the skull, and they found that it closely replicated the real human results. And by simplifying the system they were able to discover something new: in response to an impact, the brain bounces back and forth at a distinct frequency: about 15 times per second, or 15 Hertz. This resonant behavior of the brain had previously been overlooked, the authors report in Journal of the Royal Society Interface. What's more, this 15 Hz oscillation overlaps with most on-field collisions in a variety of sports. In previous studies, college football players, boxers, and mixed martial arts fighters were given specialized mouthguards fitted with accelerometers. Those data showed that the vast majority of head impacts they experienced in their respective activities were under 20 Hertz in frequency. “We have this system that resonates or gets amplified at 15-20 Hertz, and then we are actually giving the excitation at that frequency range as well,” explained study author Kaveh Laksari of Stanford University. This amplification could explain how small hits are multiplied into real damage — an important factor in designing better safety measures for those of us on the field and in the stands as well.