Even Blood Flukes Get Divorced 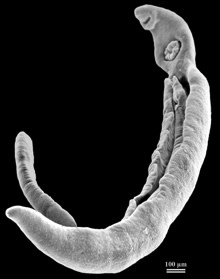 Remember that couple you knew, the ones who went out on a date and instantly fell in love, who had been together for years and seemed as happy together as the day they met, the ones who gave you hope that you might find your own true love, the ones who made you feel that there was joy to be found in the world? And remember how one day they suddenly called the whole thing off and pretty soon were seeing other people, leaving you confused and reeling? I've been having the same experience with blood flukes. I first encountered blood flukes while doing research for my book Parasite Rex. They are extraordinary flatworms that get their start in life in ponds and streams. Once they've hatched, they seek out a snail and plunge into its guts to feed. They develop and produce a new generation of flukes that look like little missiles. A single fluke can produce thousands of these missiles, which emerge from the snail and flick around in the water in search of human skin. When they find their target, they drill into their host like diving through butter. They reach a blood vessel and then ride through the circulatory system until they find their ultimate destination--depending on the species, that's the blood vessels behind the intestines, or behind the bladder. Blood flukes grow up to be males and females. The females are thin, while the males are canoe-shaped, with a giant sucker at one end. Once they've reached their new home, the two sexes seek each other out. The female crawls into the trough of the male's canoe and stays there for the most part. He creeps around with the help of his sucker, and drinking blood and passing some of it to her. He also passes molecules into her body that trigger her develop fully, whereupon they start to mate. The female lays a vast number of eggs, some of which pass into the host's urine or stool, and some of which go the wrong way and end up in the liver, where they can cause crippling damage. (The disease caused by blood flukes is schistisomiasis, after their genus name, Schistosoma). I was particularly blown away by how strong these parasitic unions are. Scientists had found that if they pulled two flukes apart, they crawled back together. And these unions can last a long time. There have been reports from doctors in Australia of treating people with schistosomiasis who had contracted the disease forty years earlier in Africa. In other words, the flukes were still coupled and still producing eggs. (If you wonder if maybe the patient was suffering from the descendants of the original flukes from Africa, remember that the parasites can't complete their life cycle without passing through a particular species of snail.) So here we had a magnificent example of long-term monogamy in parasitic flatworms of all things--a model for all of us to emulate (except for the blood-sucking, the living inside someone's abdomen, and all the other minor differences). And then they had to go and break up. Parasitologists put the fidelity of blood flukes to the test by mixing together mated couples with lone males and letting them have at it. The scientists did not sit around watching the flukes every moment of the day, waiting to see a switch. Instead, they set up the experiment in a clever way: the mated males were resistant to an anti-fluke drug, and the lone males were not. After letting the flukes mingle together for a time, they doused the parasites with the drug. Lo and behold, some of the mated males died. They had displaced the original males. Divorce had come to the world of blood flukes. Why do blood flukes split up? Sophie Beltran of the University of Perpignan in France and her colleagues looked to other animals for ideas. In particular, they looked to animals (especially birds) that live monogamously for the long-term, and yet in some cases abandon their partner for another. Divorce may have evolved as part of a flexible strategy in some animals to boost their long-term reproductive success. A number of researchers have argued that the females favored by natural selection are the ones that find mates with the most different genes from their own. Their offspring will avoid the perils of inbreeding and be more resistant to diseases. If a female senses that a new male is more different from her than her current beau, off she goes. Beltran and her colleagues set up a series of populations of blood flukes to see what factors raised the odds of divorce. Perhaps females did not abandon males, so much as males competed with each other (or maybe both sexes had a hand in divorce). Perhaps females only divorced if a lot of males were around. As the scientists report today in the online journal PLOS One, only one factor really stood out: divorce rates went up if genetically dissimilar males were around. "Monogamous female schistosomes [flukes] enhance outbreeding by divorcing for males that are less related to themselves than their first mate," Beltran and company argue. This study is both intriguing and medically important. It's intriguing, because it suggests that the same rules that govern a big complicated vertebrate like a bird also govern a spineless worm. Whether those rules govern us in any way, shape, or form, I'll leave for others to ponder. But the study is also medically important because blood flukes infect 200 million people in the world and they've proven hard to treat with drugs. Why? One reason may be the unusually high genetic diversity in blood flukes. It may allow resistance to spread among the parasites. And divorce may be driving that diversity. [Image source: PLOS One doi:10.1371/journal.pone.0003328.g001, under Creative Commons Licence]