I've mentioned EDAR before. If you've ever wondered why East Asians tend to have rather thick hair, it is likely due to genetic variation at this locus, in particular the SNP rs3827760. Yann reminded me that a new paper has come out which replicates and clarifies some earlier findings, A replication study confirmed the EDAR gene to be a major contributor to population differentiation regarding head hair thickness in Asia. Below the fold is an important figure from the paper. 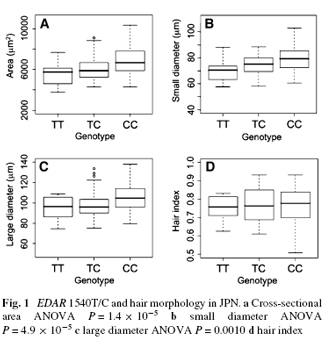 JPN obviously means "Japanese," and 1540T/C is the same SNP I pointed to above. The concluding paragraph of the paper does the standard cryptic pointing to future possible avenues of exploration:

Although 1540T/C is the major genetic contributor to hair fiber thickness variation in Asian populations, the possible impact of EDAR on other human phenotypes still remains to be elucidated. Interestingly, recent evolutionary studies reported EDA, which encodes the ligand of EDAR, to be clearly related to the body armor plate morphology of stickleback (Colosimo et al. 2005) and that the evolutionary pattern of the EDA-pathway corresponds to the morphological diversification of vertebrate skin appendages (Pantalacci et al. 2008). Moreover, EDAR is a promising candidate as a genetic determinant of human tooth and/or gland variations (Schmidt-Ullrich and Paus 2005). Therefore, EDAR could prove to be a key locus that has led to a number of morphological changes in Asians.

Remember that this may be a recent derived trait in East Asians which was driven by positive selection. In fact, that's the assumption in this paper.