Each Cell-Phone Tower Creates 18 Babies?! The Difference Between Causation & Correlation 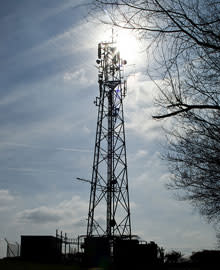 Those people living in areas with higher numbers of mobile phone towers have more children, new research is showing (spreadsheet). Matt Parker at The Guardian's Notes & Theories blog did the analysis of publicly available data and found the correlation:

Could it be possible that mobile phone radiation somehow aids fertilisation, or maybe there's just something romantic about a mobile phone transmitter mast [aka tower] protruding from the landscape?

The data show that there is a very strong correlation between the number of cell phone towers and the birth rate in communities. For every additional phone tower, there are 17.6 more babies than the national average, Parker writes in his blog post

When a regression line is calculated it has a "correlation coefficient" (a measure of how good the match is) of 98.1 out of 100. To be "statistically significant" a pattern in a dataset needs to be less than 5% likely to be found in random data (known as a "p-value"), and the masts-births correlation only has a 0.00003% probability of occurring by chance.

With all that fancy math talk, this sounds pretty conclusive, huh? But read on. Many studies depend on this type of correlation. When we report on them, we try to remind readers that there is a big difference between correlation and causation. This is one of those times. The link between the birth rate and the towers isn't actually causative, as Parker explains

Parker suggests that misunderstandings about correlation and causation have caused people to prematurely link health problems to cell phone towers. There are neo-Luddites around the world--like the group of parents in Ontario fearing the school's WiFi rays

" to protect their unborn children--who claim that wireless technology is harming our bodies. Yet there is no good evidence that non-ionizing radiation causes anything of the sort. Just because two events are positively correlated doesn't mean they are necessarily linked via causation. In these types of studies, there is always a question of where the truth lies, like reports that Adenovirus 36 causes obesity in humans

. The studies draw correlations between presence of antibodies to the virus and obesity, but if it is indeed causative, this link could go either way (obesity can cause immune dysfunction, making people more likely to have been infected with AD36), or the two could be completely causally unrelated, like many correlations, Parker explains

While this does not cause a problem when using pattern-spotting as an evolved survival tool, it does cause severe problems when assessing possible health scares based on a recently uncovered correlation. For the majority of cases, correlation does not indicate the presence of causality.

Parker is releasing his data as a press release, so keep an eye on your favorite (or least favorite) news organizations to see who bites on the sham cell tower-fertility connection. Related Content: 80beats: Bee Collapse May Be Caused by a Virus-Fungus One-Two Punch

Not Exactly Rocket Science: Does national IQ depend on parasite infections? Er…

Gene Expression: Liberals & atheists are smarter than conservatives & very religious, but why?