Drugs From the Sea

There's only one place left to find the next wave of supermedicines. Fortunately, it's where we should have been looking all along.

Outside the Scripps Institution of Oceanography in La Jolla, California, the sights, sounds, and smells are all of a seaside paradise--salty breezes, crashing blue green waves, picturesque piers, even people fighting gulls from their burgers as the wind whips napkins away. Inside, in biologist William Fenical's lab, it's good-bye to the sea's charms and hello to the smelly and slimy, the creepy and crawly, the disgusting and fascinating world of creatures scooped from that ocean outside, ground up, and thrown at every frightening disease he can think of. 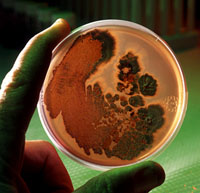 A dish teeming with bacteria gleaned from ocean sediments. They will be screened for their ability to fight infection. (Photograph by Michael Sexton)

This is the medicine chest of the next millennium--teetering mounds of agar-filled dishes smothered with fuzzy greenish growths, flasks full of brown nutrient broth layered with gray mold, beakers sporting pale, flabby eruptions like omelettes cooking in hell's kitchen. What's brewing in these potent pots? Stews of bugs--fungi and bacteria that once lived in ocean sediments, rotting driftwood, weeds, coral, sponges, and grasses. Although unappealing, any one of these containers might harbor a brand-new kick-ass cancer drug or a compound to wipe out some of the scariest viruses known to humankind.  Fenical's quest may be critical to the future of medicine. We need new drugs. The glory days of antibiotics are over. Bacterium after bacterium is gaining resistance to our arsenal.Doctors are desperate for compounds to attack cancer, Alzheimer's, AIDS, and a long list of other diseases for which there are limited treatments and no cures. Since that momentous day in 1928 when Alexander Fleming first noticed that a common mold blown in through an open window stopped staphylococcus bacteria from growing in a petri dish--his discovery of penicillin--researchers have been looking in increasingly exotic locations for the next strain of antibiotics. The search has intensified in landfills, septic tanks, swamps, chemical dumps, and trash piles. 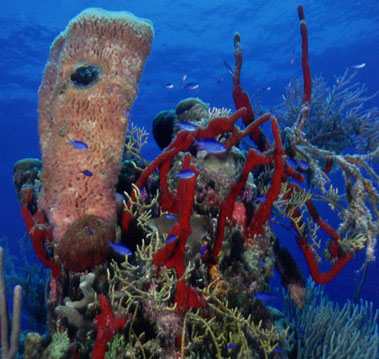 Reefs are crammed with life: We know of 93,000 reef species and suspect the total is almost a million. (Photo © Clay H. Wiseman)

But the returns are dwindling fast. "In the old days you could wander around a cornfield or up in a forest, take little dirt samples, bring them back to the lab--and what do you know? You'd found microorganisms that produce streptomycin, or actinomycin, or vancomycin," says Fenical, who is the director of the Scripps Center for Marine Biotechnology and Biomedicine. "Today when you do that you find streptomycin, actinomycin, or vancomycin--the same things. Of everything you find, 98 percent turns out to be something you've found before. It's costly; it's inefficient. And when you look at a graph and you see disease resistance going up and drug discovery going down, it's also downright frightening." Fenical's lab of weird concoctions may be proof of his conviction that drug hunters need to look in new places. His answer is surprisingly simple: search the sea. Since the 1980s he has been plunging into the ocean to find the next wave of medicines. Already he and his colleagues have dredged up some promising candidates: chemicals that soothe swelling, from lovely tropical organisms called sea feathers; a compound from a bulbous yellow soft coral that disrupts cell division in cancer cells, like taxol, the breast cancer drug derived from yew trees; and virus-killing proteins from ocean molds that live in sea grasses. 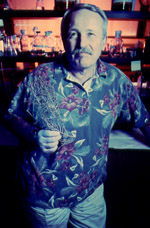 "I grew up in the midwest, says William Fenical, holding a sea fan that has anti-inflammatory properties, "but even as a child, I was interested in water." As an adult Fenical combined his love of ocean life and scuba diving with a Ph.D. in organic chemistry. (Photograph by Michael Sexton)