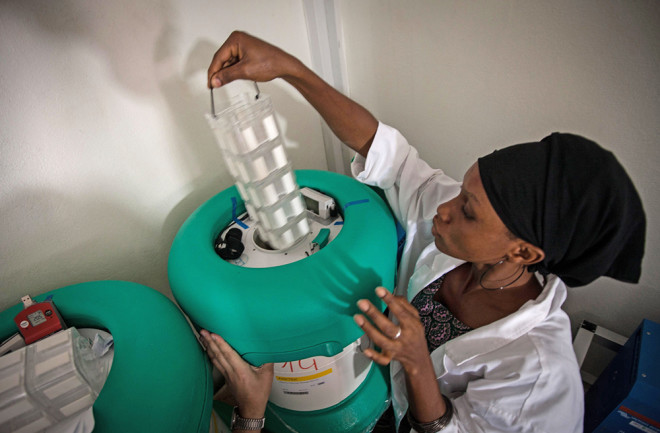 The Ebola vaccine VSV-ZEBOV is prepared for injection (top) during clinical trials. The vaccine can be stored in the field for up to five days at minus 76 degrees Fahrenheit. | Sean Hawkey/World Health Organization

While developing drugs to cure Ebola is crucial to end the current epidemic, a vaccine that prevents the infection altogether is the end-game for viral outbreaks – a way to protect healthcare workers on the front lines and to prevent future outbreaks.

It typically takes 10 or 20 years to develop and test a vaccine and get it to market. But in Ebola’s case, this time frame has been compressed into a matter of months, bringing pharmaceutical companies, scientists and regulators into uncharted territory, striving for a vaccine to curb the still-escalating epidemic without compromising safety.

“Never before has there been a push to develop a vaccine for an emerging public health threat in this short a time frame,” said Dr. Mark Feinberg, vice president and chief public health and science officer of the drug company Merck’s vaccine division.

Dr. Ripley Ballou, head of Ebola vaccine research for GlaxoSmithKline, concurs. “I’ve been doing this kind of work for 30 years, and this is the first time I’ve encountered anything with the compressed timeline and sense of urgency,” he said.

There are three vaccines currently in significant stages of development, all rushed into drug trials since the Ebola outbreak started.

Two vaccines have demonstrated promise in small groups of people and are now progressing to Phase II trials, where they are evaluated for safety in larger groups of people. One is the GSK-NIH vaccine (made by GlaxoSmithKline in conjunction with the National Institutes of Health) and the other is made by Merck and previously developed by Newlink Genetics. The trials will begin in West Africa in January.

In an unconventional move, though, those two vaccines will go through both Phase II and III at the same time. In Phase III, a drug is evaluated for its efficacy – in this case, protecting the individual from contracting Ebola. Normally Phase III trials are done after Phase II, but because of the urgency the Merck and GSK-NIH vaccines will go through both phases simultaneously.

Another vaccine, by the company Johnson & Johnson, is in earlier stages of development. That vaccine is actually a combination of two vaccines that work together, one developed by a Johnson & Johnson subsidiary and one by a Danish company. It will start its first human trials in January in the U.S., Europe and Africa, according to the company’s website. (The company did not respond to requests for comment.)

If it is impossible or unethical to conduct an efficacy trial, the Food and Drug Administration (FDA) can approve a drug under the Animal Rule, based on results in animal testing.

When GSK first started looking at an Ebola vaccine in spring 2013 – after acquiring the Swiss company Okairos which had one in the early stages – they assumed they would seek approval under the Animal Rule, Ballou said. A year later the Ebola epidemic was underway, he said, and FDA officials told them an efficacy study was now feasible and required.

Dr. Luciana Borio, director of the FDA’s Office of Counterterrorism and Emerging Threats, said the agency has gone into overdrive to speed up the vaccine development process. (She said she could not comment on specific projects.) While FDA approval is not legally required for vaccines manufactured and administered outside of the U.S., the FDA plays a major leadership role working with the World Health Organization and other international entities in coordinating global health responses.

Borio said that normally the agency takes 30 days to review applications just to launch the process of drug development, but they have processed Ebola vaccine applications in under a week.

“With all the things you have to review, discussing the submission, meetings, questions for sponsors, clarifications, the 30 days flies by,” she said. “But in a situation like this, you drop everything and focus on their application.”

In another relatively unusual move, U.S. government agencies are coordinating the vaccine trials in West Africa.

One of the Phase III trials will take place in Monrovia, Liberia, involving 10,000 people given the GSK-NIH vaccine, 10,000 given the Merck vaccine, and 10,000 given a saline placebo, as Ballou described it. The volunteers in that study will be regular people in communities at risk of infection. After several months – likely by June, Ballou said – researchers will compare infection rates among the three groups.

The U.S. Centers for Disease Control and Prevention is planning a separate Phase III trial on a population of healthcare workers in Sierra Leone. That trial will employ a “step wedge” model where different groups are vaccinated at different times. That way, everyone in the study eventually gets the vaccine, with the ones who have not yet received it serving as the control group to compare to the ones who have. This is seen as one way to avoid the ethical problems with denying at-risk study participants a vaccine that could help them avoid Ebola.

Meanwhile Phase II trials for the GSK-NIH vaccine will happen in other countries including Mali and Ghana, with populations demographically similar to those in the countries hard-hit by Ebola but where there is not currently a significant infection risk.

A fast-tracked process has real potential to save lives – but is there also a higher risk to trial participants? The experts say that while all drug development involves a risk-benefit analysis, safety has been paramount in this case.

“We don’t cut corners,” said the FDA’s Borio. “We have tremendous flexibility in our regulatory framework to be able to make decisions that are based on the scientific evidence. An accelerated timeline can be flexible but we’re not losing sight that ultimately the benefits must outweigh the risks in any given study.”

Earlier this month Merck made headlines after it halted one of its Ebola vaccine trials because volunteers reported joint pain. But Merck’s Feinberg says that trial’s dosages were higher than would be used in actual treatment. “So far the data emerging on the vaccine are very encouraging,” he said.

Ballou said that while the GSK-NIH results so far have been promising, there are still many unknowns. “What keeps everybody up at night,” he said, is worrying that they don’t know as much as they normally would about a vaccine before giving it to thousands of volunteers.

If things go as planned, Ballou said, GSK could manufacture hundreds of thousands of doses of its vaccine a month by the second half of 2015. Feinberg said the timeline and scale of manufacturing a Merck vaccine remains to be seen based on the trial results.

Then there’s the financial side of things. Scientists have said that one of the reasons an Ebola vaccine never previously advanced through clinical trials is that sporadic outbreaks affecting poor people and countries created little financial incentive for drug companies.

Now there is much more chance to sell doses of a vaccine, since demand will be greater for years to come and since international governments and agencies will buy doses for poor African countries. The U.S. and other governments are also expected to buy doses to have on hand in case Ebola jumps to other continents.

Ballou said that once the epidemic’s urgency became clear, GSK was committed to developing a vaccine regardless of financial outcome.

“The decision to work on this was based strictly on ‘This is the right thing to do,’” he said, noting that the company has the equivalent of 175 full-time employees dedicated to Ebola. “This was not budgeted, this was not planned; it was generally disruptive for the company to pull resources off other projects. But everyone is focusing on ‘Let’s deal with this epidemic – this is the right thing to do.’”

Feinberg said that “public service” is also a major motivator for Merck. He said the cooperation between private companies and various governments is “unprecedented,” and that public sector support has been key to helping drug companies take on such a financially risky venture.

“Developing the right collaborative model to do this is an important goal, something people are working towards but not something there’s a blueprint for,” he said. “Yet having that blueprint, if we’re able to develop it in the current epidemic, will be profoundly valuable as the world faces future outbreaks.”