Don't wait to have children!

The New Republic has a piece up, How Older Parenthood Will Upend American Society, which won't have surprising data for readers of this weblog. But it's nice to see this sort of thing go "mainstream." My daughter was born when her parents were in their mid-30s, so I know all the statistics. They aren't good bed-time reading (she's healthy and robust so far!). If I had to do it over again I definitely wouldn't have waited this long. After becoming a father it brought home to me that waiting was one of the worst decisions of my life. Why postpone something this incredible for the more far more prosaic pleasures of an extended adolescence? Granted, I'm not sure that I would have been the best father at 25, but I don't think there's much I can say in reply to the argument that I should have become a father by 30. More concretely, we would have had sperm and egg "banked" if we had been smart delaying parenthood. The article notes that storage of sperm costs $850 up front, and $300 to $500 per year after that, and that many balk at the cost. And how much do you spend on your cell phone every year? The issue here seems to be time preference. Of course one of the aspects of the piece which is implicit is its class-orientation. It finishes up:

It won’t be easy to make the world more baby-friendly, but if we were to try, we’d have to restructure the professions so that the most intensely competitive stage of a career doesn’t occur right at the moment when couples should be lavishing attention on infants.... 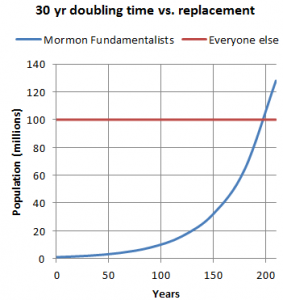 The plot to the left illustrates the dynamic which I'm alluding to. If at t = 0 you have two populations where one outnumbers the second by a factor of 100, if the population which is at ~1% proportion has a doubling-time of 30 years vs. replacement for the majority, then it takes ~200 years for the minority to outnumber the majority. Of course, we need to be careful about projections. Something I've criticized more gullible or historically naive readers about. Mormon fundamentalists or Old Order Amish have very high fertility rates in the context of being embedded in advanced societies which have very low fertility (at least in relation). But context-free models are useless. For example, some hyper-fertile groups, such as Mormon fundamentalists and Hasidic Jews, have been known to exploit the welfare state to subsidize their natalism. Such a subsidy lasts only so long as the ratio between producers and consumers favors the former. If a trend is unsustainable, it won't be sustained. In the short term the "limits to growth" are probably not capped by resources, but human capital, which allows us to have increasing marginal returns. Systems do return to equilibria eventually. As I don't see a shift back to younger families among the professional classes, what's the solution? Massive sperm and egg banking of 20 year old individuals seems like an economically feasible and effective strategy. I wouldn't be surprised if the math works out that this reduces our long term health care costs, by cutting down on children born with congential defects and decreasing the lifetime morbidity rate of the population as a whole. Want to bend the cost curve? This might be a way! Combined with pre-implantation genetic diagnosis the 'solution' then is probably more technology, not less. The long term fix of course is to reform the professional system and the culture of careerism so that what is rewarded is genuine productivity, rather than signalling. By this, I mean that I suspect many people who work "80 hours a week" aren't all that productive beyond about 50, but they do signal to their superiors that they are "committed." And of course now the whole peer group has to shift toward this irrational norm. Better workplace monitoring and productivity assessments might be a way to address this issue, so that superiors can actually evaluate gains to hours of putative labor. Finally, the General Social Survey asks people about the ideal number of children they'd like to have, versus the actually number of children they do have (CHLDIDEL and CHILDS). To remove demographic confounds I limited the sample below to non-Hispanic white women age 45 and up between the year 2006 and 2010, and compared across educational attainment. 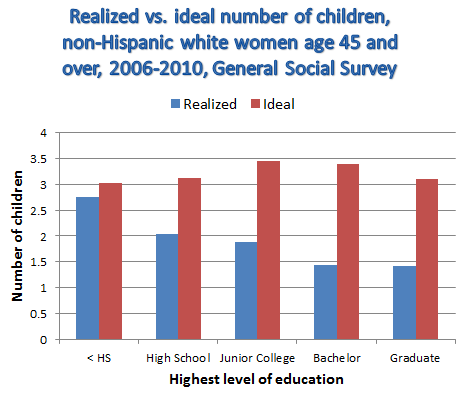