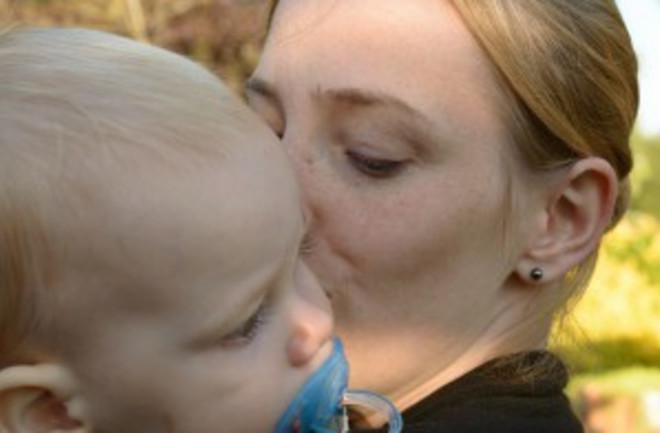 If there were ever a study that supported the stereotype of the cold-hearted scientist, this might be it. Thank goodness it was apparently written in jest, along the lines of the British Medical Journal's annual Christmas issue. But the "study" has still taken the internet by storm, because, well... it's a bit nuts. It reports a series of experiments in which toddlers are inflicted with booboos, and tested directly whether a mother's kiss would make it better. And how did they inflict booboos, you ask? Well, here's a long quote directly from the Materials and Methods, because anything else wouldn't do it justice:

To induce head boo-boos, a piece of chocolate was placed under a low table edge and the child would be allowed to crawl to the candy. Invariably, the child would then stand to eat the chocolate and would strike his or her head on the table edge. All tables were constructed of soft wood (pine or fir) and edges were appropriately rounded enough to guarantee that skin would not be broken. Hand boo-boos were induced by placing a favourite object (lovey) of the child just out of reach on a counter behind a heated coil. Attempts to obtain the lovey would result in a noxious thermal stimulus to the fingertips.

You just can't make this stuff up! Except, apparently, in this case...Maternal kisses are not effective in alleviating minor childhood injuries (boo-boos): a randomized, controlled and blinded study. "BACKGROUND: The practice of maternal kissing of minor injuries of childhood (boo-boos), though widely endorsed and practised, has never been demonstrated to be of benefit to children. OBJECTIVE: To determine the efficacy, if any, of maternal kissing of boo-boos in toddlers. DESIGN: Randomized, controlled and double-blinded study of children with experimentally induced minor injuries. Control arms included both no intervention group and 'sham' (non-maternal) kissing. Children were blinded to the identity of the kisser in both the maternal and sham control groups. SETTING: Outpatient research clinics in Ottawa, Canada. PARTICIPANTS: 943 maternal-toddler pairs recruited from the community. MEASUREMENTS: Toddler Discomfort Index (TDI) pre-injury, 1 and 5 minutes post-injury. RESULTS: One-minute and 5-minute TDI scores did not differ significantly between the maternal and sham kiss groups. Both of these groups had significantly higher TDI scores at 5 minutes compared to the no intervention group. CONCLUSIONS: Maternal kissing of boo-boos confers no benefit on children with minor traumatic injuries compared to both no intervention and sham kissing. In fact, children in the maternal kissing group were significantly more distressed at 5 minutes than were children in the no intervention group. The practice of maternal kissing of boo-boos is not supported by the evidence and we recommend a moratorium on the practice." Related content: NCBI ROFL: Children smelling man-sweat… for science! NCBI ROFL: Freud's take on doctors treating their own children is (surprise!) disturbing. NCBI ROFL: How scaring small children can help you lose weight.