Dog poop, dead rats, and maggots: this study's got it all! 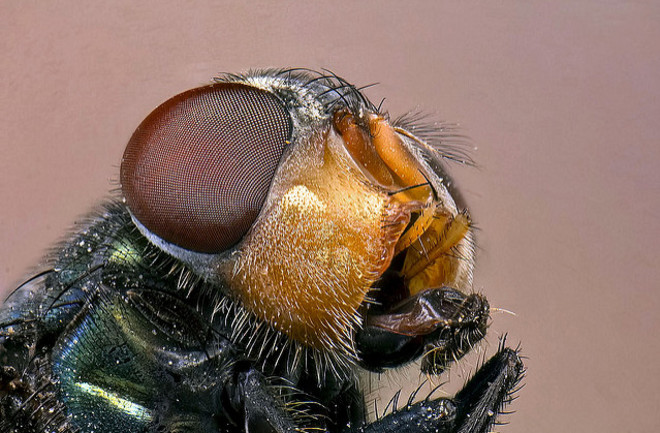 Choices, choices. We all make them, and some are more fun than others. It turns out that flies also make choices, and the choices they make are influenced by their current situations. Take this (disgusting) experiment: here, scientists had green bottle flies choose which scent to follow. Either the flies could follow the delicious scent of dog poop (a yummy treat, at least to these flies), or they could choose to follow the odor of a dead rat, the perfect place to lay eggs (blue bottle flies lay their eggs in dead flesh, which provides nourishment to the newly-hatched maggots). It turns out that hungry pregnant flies liked both dog poop and dead rat, while well-fed pregnant flies consistently chose to track down the rat, presumably to unload all their eggs. Honestly, this might be the most disgusting experimental setup we've read yet. And that's saying something!

Acquired Smell? Mature Females of the Common Green Bottle Fly Shift Semiochemical Preferences from Feces Feeding Sites to Carrion Oviposition Sites. "We investigated foraging decisions by adult females of the common green bottle fly, Lucilia sericata, in accordance with their physiological state. When we gave female flies a choice between visually occluded, fresh canine feces (feeding site) and a CO2-euthanized rat (carrion oviposition site), 3-d-old "protein-starved" females responded equally well to feces and carrion, whereas protein-fed gravid females with mature oocytes responded only to carrion, indicating resource preferences based on a fly's physiological state. Dimethyl trisulfide (DMTS) is known to attract gravid L. sericata females to carrion. Therefore, we analyzed headspace from canine feces by gas chromatographic-electroantennographic detection (GC-EAD) and GC/mass spectrometry. In bioassays, of the 17 fecal odorants that elicited GC-EAD responses from fly antennae, a blend of indole and one or more of the alcohols phenol, m-/p-cresol and 1-octen-3-ol proved as attractive to flies as canine feces. Unlike young females, gravid females need to locate carrion for oviposition and distinguish between fresh and aging carrion, the latter possibly detrimental to offspring. Gravid female L. sericata accomplish this task, in part, by responding to trace amounts of DMTS emanating from fresh carrion and by discriminating against carrion as soon it begins to produce appreciable amounts of indole, which is also the second-most abundant semiochemical in fresh canine feces, and apparently serves as an indicator of food rather than oviposition resources. Our results emphasize the importance of studying foraging choices by flies in accordance with their physiological stage." Related content: Scientists use dog sh*t to protect crops from hungry sheep.On brassieres and poop.Jeez people, enough with the cockroaches in your colons already.