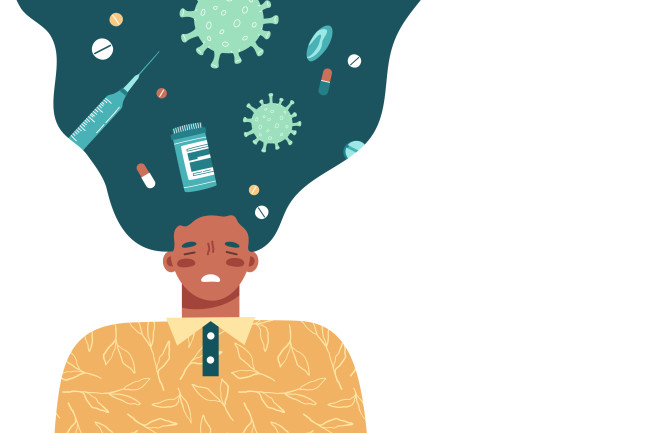 Long COVID — its official medical designation is Post-acute sequelae SARS-CoV-2, or PASC — is known to affect up to 30 percent of patients who are infected with the virus. But how well does the vaccine prevent people with breakthrough cases from facing long-term symptoms such as chronic fatigue or a loss of smell and taste?

Research to date suggests that it cuts the risk by about half, though experts caution that more studies are needed to get the full picture. Still, it's mostly good news. “The evidence is mounting that it’s likely to be protective against long COVID,” says William Li, president and founder of the Angiogenesis Foundation “I'm so glad that I am fully vaccinated.”

What is Long COVID?

When COVID-19 first made its appearance in early 2020, Li and his team were focused on the nonprofit's core research involving blood vessels and their affect on health. Within the year's first quarter, however, they were suddenly looking into the new virus and its host of mysterious symptoms.

The team looked at autopsy samples from patients who succumbed to the virus and discovered how far-reaching the damage was. From the lymph nodes to the brain, the novel coronavirus was reaching every organ of the body. “We were astounded to discover that the coronavirus not only affects the lungs, but it invades the vascular cells; the lining of blood vessels,” says Li. The researchers published their findings in the New England Journal of Medicine, and the information helped doctors better understand the blot clots that were forming — and to prevent them through the use of blood thinners.

As more people became infected, reports of “long COVID” were beginning to hit mainstream news reports. Patients who had recovered from the initial blow of the virus — even if it was a mild case initially — began suffering from a vast array of symptoms, including brain fog, loss of taste and smell, extreme fatigue or persistent shortness of breath. Even seemingly unrelated conditions, such as tinnitus or a “ringing in the ears,” can be a long COVID symptom, Li notes.

Patients took to social media to describe their symptoms (of which there are roughly one hundred) and connect with others going through similar challenges. They dubbed themselves “long haulers,” and were largely dismissed by the medical community until the fall of 2020, says Li.

Why some people are facing these (sometimes severe) long-term symptoms largely remains a mystery. “We do not yet understand what predisposes individuals to long COVID,” says physician-scientist Bernard Khor, principal investigator at Benaroya Research Institute at Virginia Mason. “People who are older and have pre-existing conditions may be at increased risk.” But that doesn't fully explain why many perfectly-healthy individuals were dealing with long-term consequences of the disease, as well.

Li likens the research into long COVID to attempting to assemble a 1,000-piece puzzle of the Sistine Chapel while all the pieces are in constant motion. However, there are a few key related findings out there. For example, in one study Li references, a blood marker related to blood clotting is higher in people who are sick with COVID and remains high in people who suffer from long COVID. It may, at least partially, explain the occurrence of ongoing symptoms.

What Do Studies Say About the Vaccine and Long COVID?

A recent Israeli study examined 1,457 fully vaccinated health care workers and found there were just 39 breakthrough infections of those mostly mild cases; 19 percent of them still had symptoms after 6 weeks.

Researchers drew a much larger sample size in a study published in The Lancet that followed 1.24 million people residing in the United Kingdom after they received AstraZeneca, Moderna or Pfizer vaccines. They found that the odds of someone having symptoms for longer than 28 days after (post-vaccination) infection were cut in half if they had already received two shots, suggesting that the risk of long COVID is diminished in individuals who have gotten both jabs.

The data was collected from December, 2020 to July, 2021; a period when vaccinations where being delivered rapidly in the region, notes Li. The study authors also note several caveats, like that the study relied on self-reporting through an app and underrepresented poorer regions. “The study itself is simply revealing patterns to learn from, rather than clear cut conclusions,” says Li, who was not personally involved in the research.

One theory as to why the vaccine might be cutting the risk of long COVID among those with breakthrough infections? In those cases, the the viral load is likely to be smaller. “We believe, although we don’t know for sure, that [long COVID] could be the result of high concentrations of the virus for long periods of time and the body’s inability to be able to respond properly,” says Li. “So now what we need to do is look at these breakthrough cases with long COVID to try to determine if they behave or look differently than the unvaccinated or pre-Delta cases.”

Another question to consider as booster shots are being rolled out: Will a third jab provide additional protection against these drawn-out symptoms? “Big question mark, but an important one to know, as well,” says Li.