Some experts say measures such as sanitizing your groceries are overkill. Just make sure to wash your hands instead. 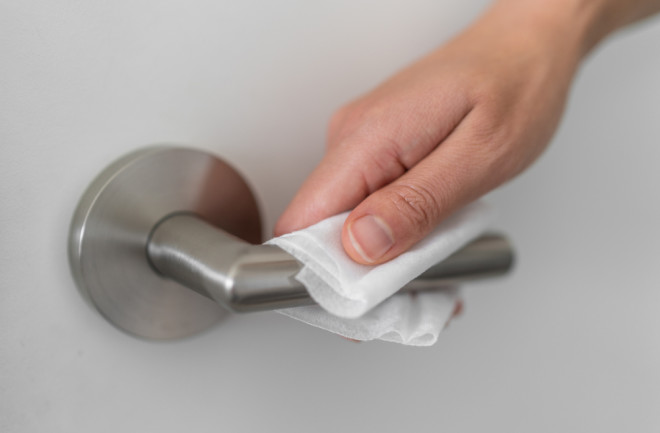 In the last week, more than 20 million people have watched a video of Jeffrey VanWingen, a family medicine physician in Michigan, unpacking his groceries. He divides his countertop with a long strip of blue tape into two halves: dirty and clean. He then drenches a paper towel with Lysol and wipes down bags of chips and plastic-wrapped heads of broccoli before he transfers them over to the “clean” side. He even scrubs apples and oranges with soap.

VanWingen does this, he says in the video, because while the COVID-19 pandemic is unprecedented, “there is a precedent that we use in the medical field called sterile technique that can reduce risk.” But some microbiologists say that some of this advice is overkill, or even potentially harmful.

“Telling people that they need to prepare their groceries the way a surgeon prepares for an operation alarmed a lot of people,” says Don Schaffner, a food microbiologist at Rutgers University who posted a thread on Twitter critiquing the video. “People have reached out to say, ‘That was making me so anxious, I was so worried, and you sort of injected some common sense,’” adds Schaffner.

One of the more alarming points raised in the video is a Centers for Disease Control and Prevention report showing that traces of the virus remained on surfaces on the Diamond Princess cruise ship for up to 17 days. But Schaffner says that’s not as worrisome as it seems. While the researchers did indeed find viral RNA aboard the ship, they didn’t detect any full, functioning viruses themselves.

A virus like the novel coronavirus is basically a tiny capsule of protein filled with genetic material. Its whole job is to inject that genetic material, or RNA, into host cells and commandeer them so those host cells create more of the virus. Without those protein capsules, the viral RNA can’t do anything. So, finding viral RNA doesn’t mean the virus still poses an active threat any more than discarded bullet shells mean there’s a shooter present — all they tell you is that, at some point in the past, a gun was fired.

And while scientists are still learning how long the virus can remain dangerous on different surfaces, some say disinfecting everything you come across is overkill. They argue that you could achieve the same results by simply washing your hands.

“The virus is not going to jump from a package to something. It needs to get transferred, and the most likely way that the virus would have to get transferred is through hands,” says Ben Chapman, a food safety expert and professor at North Carolina State University who co-hosts a podcast with Schaffner. “And so instead of trying to eradicate it off the package, I focus on the hands.”

The video’s advice to keep shopping trips short and to avoid other people in the store as much as possible is sound. But Chapman and Schaffner argue that once you get home, it’s a different story. “What I do recommend is when you come back from the grocery store, wash your hands,” says Shaffner. “After you’ve done that, put your groceries away. And if you’re still worried that you might have some residual coronavirus from your groceries, wash your hands again.”

And while most of the measures, like sanitizing bags of chips or avoiding reusable shopping bags, are unnecessary but harmless, Schaffner and Chapman both singled out one piece of advice from the popular decontamination video as actively harmful: “You don’t need to sanitize your groceries, [but you] absolutely should not be washing fruits and vegetables with soap,” says Schaffner. “Soap is designed for hands and for dishes, it’s not designed for use on food.” Ingesting soap in high levels could be dangerous, but the main risk is giving yourself an upset stomach. VanWingen, the physician in the viral video, has since issued a correction in the description advising against using soap to clean foods.

VanWingen’s video also covers how to handle food that’s been delivered. His advice is close to Schaffner’s and Chapman’s — but, again, more stringent than they say is necessary. “How I’ve been handling it with takeout is coming home, taking things out of the bag, and transferring it to a new plate — which is, truthfully, what I would do anyway,” says Chapman. “And then, before I eat, I’m washing my hands.”

The same goes for mail and packages: As long as you’re not interacting with the delivery person, you should be OK without sanitizing them. Schaffner says someone reached out to him asking whether it was safe for her elderly mother to handle newspapers. He told her that he’d instructed his own octogenarian parents to avoid going to the store, but that they could read the paper.

“Stay away from people; wash your hands, use hand sanitizer; and be nice to people,” he says, particularly to the (often low-wage) workers we rely on for food and deliveries.

“They’re what’s keeping society from collapsing right now,” adds Schaffner. “Leave them a big tip if you can.”