Does Anyone Know CPR!?

A middle-aged man collapses and, for 15 minutes, has no pulse. Can he return to life? 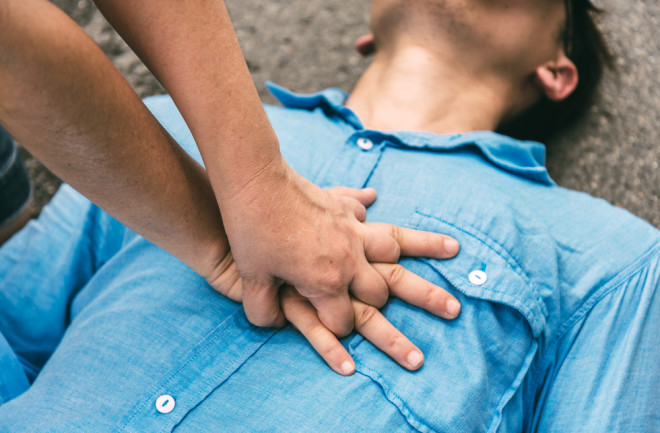 “Is there a doctor?”

The call rippled through the packed rush-hour train soon after we had pulled away from the platform. Recalling false alarms on airplanes (usually fainting spells from too much alcohol and too little oxygen), I hesitated.

But this was the 5:37 express, not a plane. It could be something serious.

I set my book down and stood up.

Stepping down the aisle, I came to a ring of onlookers peering down at a middle-aged man slumped across two seats. He wore a creased, stylish shirt open at the collar.

“Sir, are you OK?” I asked, jostling a shoulder. No response. I pressed two fingers on his neck. No pulse.

I tore open his shirt, locked my hands over his sternum and started chest compressions. But the angle was wrong. He needed to be horizontal on a flat surface for my compressions to be effective. Sliding him partially off the seat dropped his head like a trussed deer’s.

“Please hold the head,” I urged a woman looking on. She cradled it, and we shimmied him lengthwise into the aisle and onto his back. With my hands on his chest, I locked my elbows and pushed down hard at a rate of 100 per minute, each time letting the chest fully re-expand.

“Pull the emergency brake!” someone shouted. The train shuddered to a stop.

A man crouched across the aisle. “Want to switch?” he asked. “I’m a doctor.” Compressing a chest is hard work, best done in shifts.

Leaning partly over one of the seats, he took over. From my angle, his hands seemed off the sternum. “Here, like this,” I said, cupping his hands and shifting them over. “Keep the heels on top of each other. Make them a pile driver.”

He shot me a wry look.

“No worries,” he said, smiling.

A third doc arrived. “I’m a dermatologist, but ER was my second choice,” he said excitedly.

He maneuvered to relieve the surgeon.

A woman in the crowd spoke up. “I’m an operating room nurse. Shouldn’t you be doing mouth-to-mouth?”

“We’re OK,” I told her. The man’s face had lost color. But studies show that hands-only CPR moves enough air in and out of the lungs to sustain blood oxygen levels.

Estimates vary, but a recent study in The New England Journal of Medicine found that 61 percent of sudden cardiac arrests stem from ventricular fibrillation, or V-fib, an electrical misfire sparked by diseased or stressed heart cells. A heart attack, which is a sudden blockage of blood flow in a coronary artery, is probably the most common cause of V-fib. But many cases do not happen that way.

V-fib’s random discharges trigger neighboring cells to fire chaotically rather than follow the heart’s pacemaker cells. This sends out a steady beat of electrical impulses from their perch in the heart’s right atrium.

An automated external defibrillator, or AED, can remedy the situation. It delivers an electric charge that silences every cell simultaneously, allowing the pacemaker cells to fire first and regain control of the heartbeat. AEDs are ubiquitous in airports, train stations and other public spaces.

“We need your AED!” I shouted at the conductor.

“We don’t have one!” she hollered.

Oh Jesus, I thought. CPR generates roughly a third of the heart’s normal output of oxygenated blood. And every minute of delay to defibrillation drops the odds of survival by 10 percent. We were already six minutes in.

Every year, 360,000 Americans suffer sudden cardiac arrest. Less than 10 percent survive. One of the wrenching aspects of being an emergency room doc is to restart a heart, only to have the patient never wake up because, before getting to the ER, the brain had been starved of oxygen.

Even more tragic is that V-fib is eminently treatable in public places. In Las Vegas casinos, people shocked in less than three minutes have a stunning 74 percent chance of survival. Sure, the world is not a casino festooned with defibrillators, but a lifeline exists between collapse and defibrillation: cardiopulmonary resuscitation, or CPR.

The math is simple: Deprived of oxygen, a brain starts dying in four minutes. To generate oxygen for the brain, compressions must start immediately and continue non-stop until defibrillation. A study involving Phoenix emergency medical dispatchers showed that when they coached bystanders over the phone on CPR, compressions began on average 3.5 minutes after heart stoppage rather than 4.5 minutes. Survival leaped.

We had been doing CPR for 15 minutes when the train inched back to the platform. Grabbing limbs, we scooted him to the train’s exit doors. Two paramedics met us and opened their portable defibrillator box. They applied the sticky pads to his chest: one to the upper right part and the other to the lower left part.

One of the paramedics pressed a red button. The man’s body jerked. I felt blind without a heart monitor to tell if the shock had worked. Following protocol, the paramedics resumed compressions for two more minutes.

Other paramedics wheeled in a stretcher. They strapped an oxygen mask to the man’s face. He pinked up. My stomach clenched. Should we have given him mouth-to-mouth? Then the man’s lips twitched.

The signs of life were great to see. But even the most advanced care after cardiac arrest wasn’t getting us those 15 minutes back, during which his brain might not have received enough oxygen to prevent brain damage. The medics hoisted him onto a stretcher.

We all did double takes. The voice was coming from the stretcher. The man’s eyes were open.

“I’m OK. Why are you doing this?” he said through the oxygen mask.

I’ve had patients wake up after being defibrillated in the ER, but never alert and talking right after bystander CPR. I was amazed. For 15 full minutes, the CPR had kept oxygenated blood flowing to his brain. Look Ma, only hands.

A thought struck me: When you’re dead, nothing moves, so your body’s organs and muscles consume almost no oxygen. The brain uses 20 percent of the oxygenated blood pumped by the heart, which means CPR’s one-third output is plenty to keep the brain healthy.

I touched his face as much to prove I wasn’t dreaming as to soothe him. “You just died,” I said. “You should do what the medics suggest.”

\“Your heart stopped. We shocked you.”

The next day, I visited the man in his hospital room. Sitting up in his bed, he looked healthy and chipper. His wife and two grown children were sitting around his bed, looking relaxed.

“I came to apologize for the shirt,” I said.

Tests on him later showed no coronary artery blockages and healthy heart muscle.

One of the mysteries of V-fib is the frequent lack of an obvious trigger. The cardiologists’ best guess was that scar tissue from a prior heart procedure had disrupted the man’s electrical rhythm. Two days later, to ward off a repeat performance, surgeons placed an automated implantable defibrillator in his chest.

I called him two weeks after his surgery.

“I’m doing great! Back at work like nothing happened,” he told me. “All I remember is feeling queasy for a minute, then waking up.”

CPR is a way for thousands more who suffer cardiac arrest to have a chance of waking up, too. Look Ma, only hands.

[This article originally appeared in print as "Helping Hands"]