Doctor Octopus Will See You Now

Octopus arms inspire the next generation of robotic surgery. 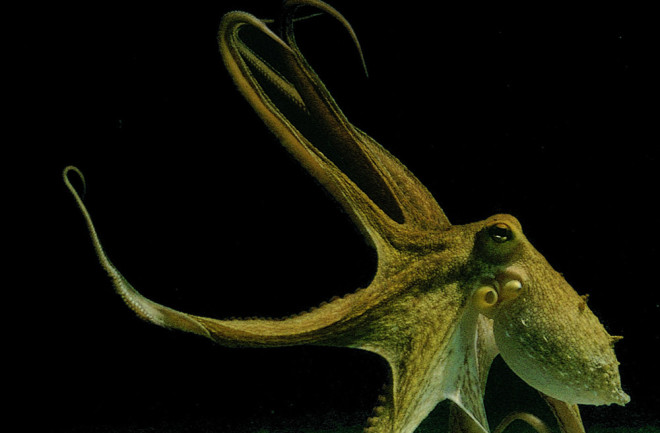 To figure out how the robotic arms could avoid tangling, the team turned to the limbs of an octopus. (Credit: Benny Hochner/Hebrew University of Jerusalem)

Imagine flexible, robotic arms crawling through the organ-packed spaces of a patient’s body. The tools deftly navigate through the intestines to reach a section of colon. The arms then gradually stiffen and, using a gripper tip, perform delicate surgery. That’s the vision, complete with prototype, inspired by octopus limbs and executed by a European group of engineering, neurobiology and robotic experts.

The project, the ponderously titled “STIFFness controllable Flexible and Learn-able Manipulator for surgical OPerations” consortium, is generally known by its more creative acronym STIFF-FLOP. As the long-form name suggests, the consortium is building robotic arms that would work together to perform minimally invasive surgeries by making just one entry incision or approaching organs through natural orifices. The arms would be flexible and long enough to navigate complex anatomy, yet stiff enough to pull off an intricate procedure. But the prototype had an issue: How would the arms avoid tangling or grabbing the wrong organs?

Octopuses, with their eight wavy limbs, had the answer. Unlike human brains, which let us know if we’re crossing our arms, octopus brains lack similar motor neuron maps. Yet, amazingly, their flexible, sucker-covered arms hardly ever end up in a tangled mess.

An inside view of the robotic arm at work. (Credit: Helge Würdemann/core/King’s College London/STIFF-FLOP)

The Octopus Research Group at the Hebrew University in Israel, now one of the STIFF-FLOP partners, had been studying octopus motor skills. They noted that arms, even an hour after separation from an octopus’s body, wriggled and grabbed at objects in their tanks but never touched their former owner, other octopus limbs or skin samples. They concluded that a chemical on the octopus skin must prevent the arms from nabbing each other. They haven’t identified the chemical yet, but they’re applying a version of that self-avoidance trick to the STIFF-FLOP project, where engineers are re-creating it in computerized form.

Their program will enable the prototype’s arms to recognize each other and certain body parts. For example, they could “identify the internal walls of the intestine and avoid grabbing them in the same way that an octopus’ arm is ‘programmed’ to identify its neighboring arms,” says Guy Levy, a neuroscientist from the Hebrew University of Jerusalem and one of the researchers.

A team of engineering, neurobiology and robotic experts is developing robotic arms that can safely navigate through a patient's body. This prototype is maneuvering itself into a dummy’s body cavity. (Credit: Helge Würdemann/core/King’s College London/STIFF-FLOP)
1 free article left
Want More? Get unlimited access for as low as $1.99/month
Subscribe