Do you know what's growing in your dishwasher? Do you want to? 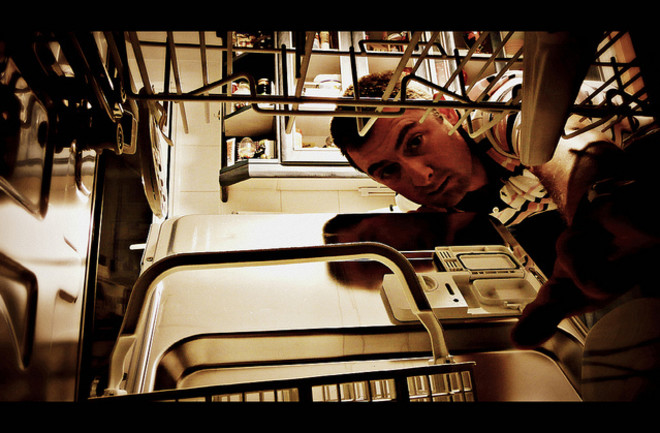 Image: Flicker/Neticola SnyI'll go ahead and answer that for you -- it's a definite "no." At least according to this study, which looked at what grows in the biofilms ("goop") that form along dishwasher door seals. First of all, it's kind of amazing that anything can survive the crazy environmental fluctuations of a dishwasher: from heat to salts and detergents, dishwashers are designed to destroy organic matter. But life finds a way, and apparently in biofilms, which in this case included large numbers of bacterial and fungal species, many of which can be pathogens. Yum! Microbiomes in Dishwashers: Analysis of the microbial diversity and putative opportunistic pathogens in dishwasher biofilm communities. "Extreme habitats are not only limited to natural environments, but also apply to man-made systems, for instance household appliances such as dishwashers. Limiting factors, such as high temperatures, high and low pH, high NaCl concentrations, presence of detergents and shear force from water during washing cycles define the microbial survival in this extreme system. Fungal and bacterial diversity in biofilms isolated from rubber seals of 24 different household dishwashers were investigated using next generation sequencing. Bacterial genera such as Pseudomonas, Escherichia and Acinetobacter, known to include opportunistic pathogens, were represented in most samples. The most frequently encountered fungal genera in these samples belonged to Candida, Cryptococcus and Rhodotorula, also known to include opportunistic pathogenic representatives. This study showed how specific conditions of the dishwashers impact the abundance of microbial groups, and investigated on the inter- and intra-kingdom interactions that shape these biofilms. The age, the usage frequency and hardness of incoming tap water of dishwashers had significant impact on bacterial and fungal composition. Representatives of Candida spp. were found at highest prevalence (100%) in all dishwashers and are assumingly one of the first colonizers in recent dishwashers. Pairwise correlations in tested microbiome showed that certain bacterial groups co-occur and so did the fungal groups. In mixed bacterial-fungal biofilms, early adhesion, contact and interactions were vital in the process of biofilm formation, where mixed complexes of the two, bacteria and fungi, could provide a preliminary biogenic structure for the establishment of these biofilms.IMPORTANCE Worldwide demand for household appliances, such as dishwashers and washing machines, is increasing, as well as the number of immune-compromised individuals. The harsh conditions in household dishwashers should prevent growth of most microorganisms. However, our research shows that persisting poly-extremotolerant groups of microorganisms in household appliances are well established under these unfavourable conditions, supported by the biofilm mode of growth. The significance of our research is in identifying the microbial composition of biofilms formed on dishwasher rubber seals, how diverse abiotic conditions affects microbiota and which key members were represented in early colonisation and contamination of dishwashers, as these appliances can present a source of domestic cross-contamination leading to broader medical impacts." Related content: Here’s how much bacteria you spew on the cake while blowing out birthday candles.Do farts carry germs? Well, it depends on whether you are wearing pants.Manly men like it hot!