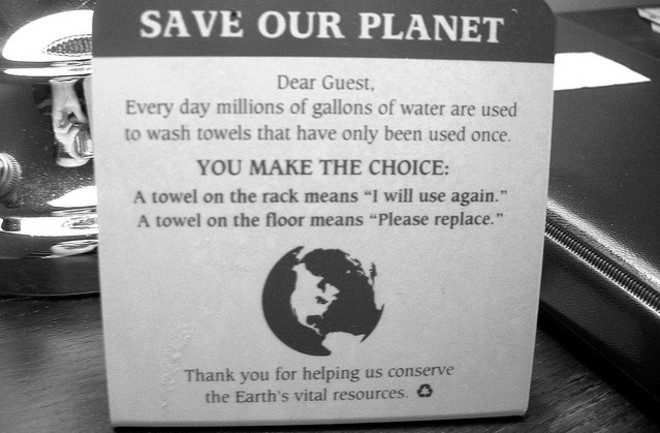 Photo: flickr/muklukIf you've ever stayed at a hotel, you're probably familiar with those little signs they put in the bathroom asking you to reuse your towels. Well, this study set out to test whether those signs actually work. The researchers tried three different signs: one had the typical appeal to the environment, while the others took a different approach. One's message focused on the behavior of fellow guests of the hotel, saying that "75% of guests in this hotel usually use their towels more than once." The last's message focused on the other people who slept in that same room, saying that “75% of guests in this room usually use their towels more than once.” Turns out that the last version was the most effective, causing people to use the least towels compared to the other two. The authors think this may be because the sign appealed to people's desire to conform to the customs of the area they're visiting. Nothing like peer pressure to get results!A towel less: social norms enhance pro-environmental behavior in hotels. "Previous research has shown that normative appeals to engage in environmentally friendly behavior were most effective when they were accompanied by a provincial norm (e.g., when norms matched individuals' immediate situational circumstances). Analyzing hotel guests' towel-use during their stay, the current study tests whether messages employing provincial norms were more effective in reducing towel-use than standard environmental messages. In line with previous findings, guests of two hotels used significantly fewer towels when provincial normative appeals--rather than standard environmental messages--were communicated. These findings corroborate to the body of research demonstrating the power of social norms on environmental behavior." Related content: NCBI ROFL: Shopping cart etiquette triple feature.NCBI ROFL: Following instructions on a final examination: an informal look.NCBI ROFL: Honesty when lighting votive candles in church: an informal look.