Diseases of the Silk Road 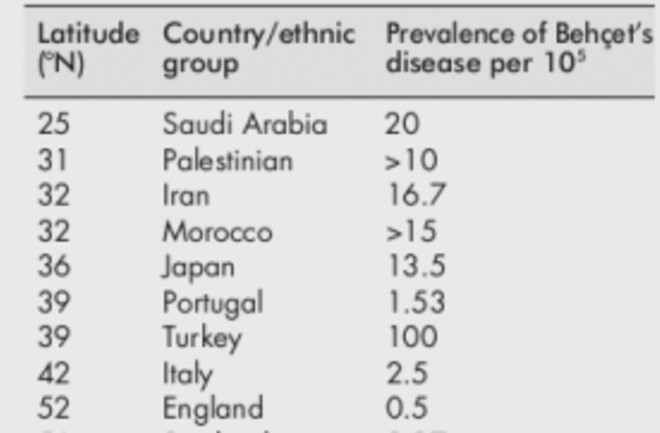 Nature has twopapers out about something called "Behçet's disease." It has apparently also been termed the "Silk Road Disease", because of its associations with populations connected to the Central Eurasian trade networks.Though described by Hippocrates 2,500 years ago, apparently it was "discovered" only in the 20th century by a Turkish physician. The reason that that might be is obvious; the prevalence of Behçet's disease is far higher in Turkey than any other nation. Two orders of magnitude difference between Northwest Europeans and Turks. East Asian populations are somewhere between Europeans and Turks, while the coverage of Inner Asia itself is thin (the first case diagnosed in Mongolia was in 2003). Additionally, the relatively similar frequency in Morocco and Iran, despite the latter nation being strong influenced by Turkic migration (25-30% of Iranian citizens are ethnically Turk), and the former not at all, leads to me wonder if there may be convergence or parallelism, rather than common ancestry, at work (or, more likely, a combination of both). The relationship between Morocco and Japan to the Silk Road in a direct fashion is tenuous at best. These were two polities which managed to be just outside the maximum expanse of Turanian empires. The Japanese famously repulsed the Mongol invasion ordered by Kublai Khan, while the Arab rulers of Morocco never fell under Ottoman control.And the early documentation by Hippocrates makes me wonder at the frequency of the disease in Greece itself. Greeks presumably contributed to the ancestry of modern Anatolian Turks, but it is far less likely because of the nature of the Ottoman system that Turks would have contributed to the ancestry of Greeks. I can't find prevalence data for Greece, but it may be an open question in what direction the disease spread along the Silk Road.

But studies like these are nice because they are steps to overcoming one of the main issues with genome-wide associations: they use a narrow population sample, and so are not of necessary world wide relevance. Remember that even if a risk allele is not the direct cause of the disease, if it is closely associated with that alleles which are, it is of diagnostic utility. At least within that particular population. This study used groups from western and eastern Eurasia to check the power of particular single nucleotide polymorphisms (SNPs) to predict disease risk. First, Genome-wide association studies identify IL23R-IL12RB2 and IL10 as Behçet's disease susceptibility loci:

And, Genome-wide association study identifies variants in the MHC class I, IL10, and IL23R-IL12RB2 regions associated with Behçet's disease:

Behçet's disease is a genetically complex disease of unknown etiology characterized by recurrent inflammatory attacks affecting the orogenital mucosa, eyes and skin. We performed a genome-wide association study with 311,459 SNPs in 1,215 individuals with Behçet's disease (cases) and 1,278 healthy controls from Turkey. We confirmed the known association of Behçet's disease with

Observe that the SNPs differ between the two studies. Here are the tables which show the SNPs, their odds ratios and statistical significance for the first and second paper respectively.

Finally, the last paragraphs to the two papers:

We report here a GWAS identifying two new susceptibility loci for Behçet's disease; these loci include interleukin and interleukin receptor genes, which are central in immune response. The quantitative alteration of these cytokines (and others in the same cascade) could help explain in part the complex pathophysiology of Behçet's disease and suggest new therapeutic avenues.

In summary, we report a GWAS and meta-analysis identifying common variants in IL10 and at the IL23R-IL12RB2 locus that predispose to Behçet's disease. Our study also supports the association of HLA-

as the primary association to Behçet's disease within the MHC region and reveals another independent MHC Class I association telomeric to HLA-B. Expression studies indicate that the disease-associated IL10 variants are associated with decreased expression of this anti-inflammatory cytokine. This may suggest a mechanism, possibly in concert with commensal microorganisms...that results in an inflammation-prone state that increases susceptibility to Behçet's disease.

The relationship to commensal microorganisms may be pointing to a major reason why the frequency of the illness seems to decrease as one moves north. This could be a case where genetically susceptibilities toward expression of the illness interact with environmental factors. One could imagine, for example, that the harsh cold and light population of Inner Asia may have incubated particular susceptibilities which never manifested themselves because of the environment. But with the shift toward the denser and moister climes of western and eastern Eurasia the combination of genes and environment resulted in the emergence of the disease. With that said, again, I'm curious as to the nature of the SNPs, and the phylogenetics of the disease causing mutations. Do they derive from common mutants? Implying then that common ancestry via the Silk Road was critical. If the genetic variation around the mutants implies common descent then the Silk Road may have been critical in the spread of the risk alleles, but it would still be an open question whether they flowed from east to west or west to east, contingent on patterns of genetic variation. Or, are they independent mutations? Perhaps they're side effects of adaptations? Citation: