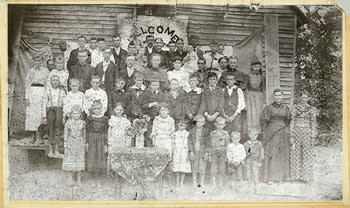 Digging around in your DNA is getting cheaper and easier all the time. For only $207, you can now subscribe to 23andMe's genotyping service

, for instance, which gives you information about your genetic background, potential disease susceptibilities, and other traits. And as the numbers of people in such companies' databases climb into the hundreds of thousands, it has become possible for software to connect customers who share so much DNA, they may well be relatives. For adoptees who don't have access to their adoption records and are curious about biological family, there's never been a better time to go searching. The New York Timesfollows the story

of one 42-year-old woman who, after learning she was adopted, finds her third cousin through a DNA service, and details the relationship that they form as she deals with the revelation that she is not, after all, the daughter of her adoptive parents.

About five weeks after shipping off two tiny vials of her cells from a swab of her cheek, Mrs. Vaughan received an e-mail informing her that her bloodlines extended to France, Romania and West Africa. She was also given the names and e-mail addresses of a dozen distant cousins. This month, she drove 208 miles from her hometown here to Evansville, Ind., to meet her third cousin, the first relative to respond to her e-mails. Mrs. Vaughan is black and her cousin is white, and they have yet to find their common ancestor. But Mrs. Vaughan says that does not matter. “Somebody is related to me in this world,” she said. “Somebody out there has my blood. I can look at her and say, ‘This is my family.’ ”

One does wonder whether some adoptive parents might take umbrage at the implication that they and their aunts, uncles, and cousins are not "family" enough. And there is a lot of genetic distance between third or second cousins---it's unlikely that the biological connection will be visible in the form of a shared nose or common interests. But one can imagine the excitement of executing the genetic equivalent of a web search and turning up people who share your great-grandparents. The Times doesn't provide a list of the companies that give this kind of service, but 23andMe, which has one of the largest databases out there, has a series of posts on their blog describing how to use their tools to discover your relatives and family relationships. If you are interested in trying this for yourself, you should give it a read