Did Traveling to the Moon Take a Toll on Astronauts’ Hearts? 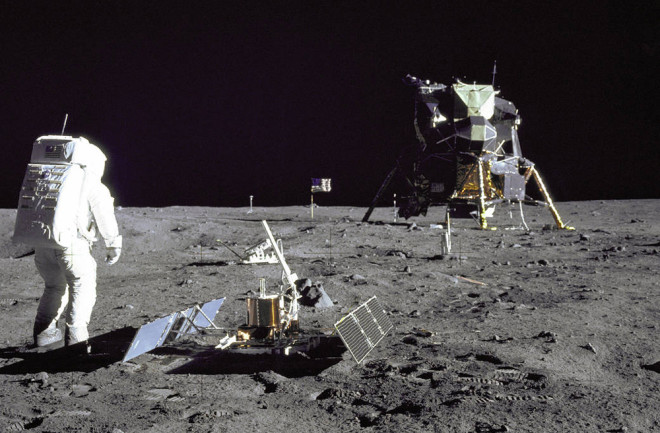 Astronaut Buzz Aldrin is pictured during the Apollo 11 extravehicular activity on the moon. (Credit: NASA) Astronauts who explore deep space may be more likely to suffer from cardiovascular disease later in their lives. That’s the implication of a new study, which found that Apollo astronauts, who had flown to the moon in their 30s, were more likely to die of cardiovascular problems in their 50s and 60s than astronauts who flew missions in low Earth orbit. In low Earth orbit—the domain of ISS and the former Space Shuttle flights—Earth’s magnetic field blocks radiation from further out in space, like galactic cosmic rays or charged particles from solar flares. Physicists call this ionizing radiation, because the particles have so much energy that they strip electrons away from atoms as they pass by. That radiation, especially in the form of heavy, high-energy ions like 56-Fe, seems to damage the cells that line the walls of blood vessels, called endothelial cells. “Healthy endothelial cells help prevent atherosclerotic plaque from forming inside the walls of blood vessels; this is commonly referred to as hardening of the arteries,” says Michael Delp of Florida State University, who led the study. Plaque buildup can eventually lead to blood clots, coronary heart disease, heart attacks, or strokes.

Flying to the moon means venturing past the protection of the magnetosphere and crossing the Van Allen Belts, two regions of trapped high-energy particles at the edges of the magnetosphere, and then enduring constant exposure to ionizing radiation in deep space for the rest of the trip. The astronauts who flew to the moon on the Apollo missions are the only humans who have ever been outside Earth’s protective magnetosphere. Although the Apollo spacecraft offered some radiation shielding, they couldn’t completely protect the astronauts.

NASA's Van Allen Probes orbit through two giant radiation belts surrounding Earth. Their observations help explain how particles in the belts can be sped up to nearly the speed of light. (Credit: NASA) “The lunar astronauts also experienced a visual phenomenon of light flashes (~17/hour) when the spacecraft was dark, and tests indicated that the flashes were the result of HZE cosmic rays traversing the retina,” wrote Delp and his colleagues. Until recently, though, everyone assumed that the trips to the moon had been too short to expose astronauts to enough ionizing radiation to do lasting damage. However, according to a preliminary study published today in Scientific Reports, that short exposure may have been enough to jeopardize the Apollo astronauts’ long-term cardiac health.

Delp and his colleagues compared the causes of death for 7 Apollo astronauts to those of 35 astronauts who had flown missions in low Earth orbit, along with 35 more who trained but never flew a space mission. Astronauts who had been to low Earth orbit died of cardiovascular disease at about the same rate as astronauts who had never flown space missions: 9 percent and 11 percent, respectively. But of the seven Apollo astronauts, three died of cardiovascular disease. That 43 percent mortality rate is about four times higher than for astronauts who flew in low Earth orbit. That brought the Apollo astronauts’ rate of death from cardiovascular disease almost even with the general U.S. population. Astronauts to be fitter and more affluent than the general population, but Apollo astronauts’ time in deep space may have damaged their arteries just enough to offset their other health advantages. Of course, seven astronauts isn’t a very large sample, so Delp urges caution when it comes to drawing definitive medical conclusions from that mortality data. However, he and his colleagues believe their findings raise important questions for further research. “Despite this limitation, we thought it was important to publish these results because it is also difficult to ignore the possibility that deep space travel, including deep space radiation, may be having a much more adverse effect on cardiovascular health than previously estimated,” he said. That could have important implications for future manned missions to Mars or extended trips to the Moon.

Looking for An Explanation

To make sense of the mortality data, Delp and his colleagues put lab mice through a simulated trip to deep space. They wanted to test whether radiation, weightlessness, or a combination had caused the increase in cardiovascular problems. One group of mice spent two weeks suspended to simulate the effects of weightlessness on their forelegs, while another group got a heavy dose of 56-Fe radiation. A third group experienced both conditions. Six to seven months later—about a quarter of a lab mouse’s natural lifespan—the researchers checked out the condition of their arteries. Letting just over half a year pass was roughly equivalent to the time that passed between the late astronauts’ flights and their deaths. Simulated weightlessness didn’t seem to have any effect on the mice, but exposure to simulated cosmic rays impaired their arteries’ ability to dilate. When the smooth muscles lining a blood vessel’s walls relax, the vessel dilates and gives the blood a wider channel to flow through, lowering blood pressure. Endothelial cells play an important role in that process, so Delp and his colleagues concluded that the cosmic rays damaged mouse endothelial cells, which eventually led to hardening of the arteries. That could also be a risk for astronauts who fly beyond Earth’s magnetosphere. “Even though we do not know what factor(s) may be causing this higher cardiovascular disease mortality, radiation is one possible factor,” he said.

The risk could be mitigated with antioxidant treatment for future deep space astronauts and improved radiation shielding for their spacecraft, according to Delp, but he and his colleagues say that more research is needed – and soon. “With countries and companies stating plans to send humans back into deep space as early as 10 years from now, there is not a lot of time to experimentally address the possible implications of these results with Apollo astronauts and answer the many outstanding questions surrounding space radiation effects on the cardiovascular system,” he said. For instance, it will be important to understand how much radiation it takes to cause long-term damage to blood vessels. The mice in the study actually received much higher radiation doses, much faster, than the Apollo astronauts were likely to have picked up, because slower exposure wasn’t feasible in the lab. “This study only gives us an initial glimpse at what might be happening to the cardiovascular system with deep space travel,” said Delp. “We are planning to follow up these Apollo and mouse results with more detailed studies.”