Did the Tomato Scare Start with Excessive Hygiene? 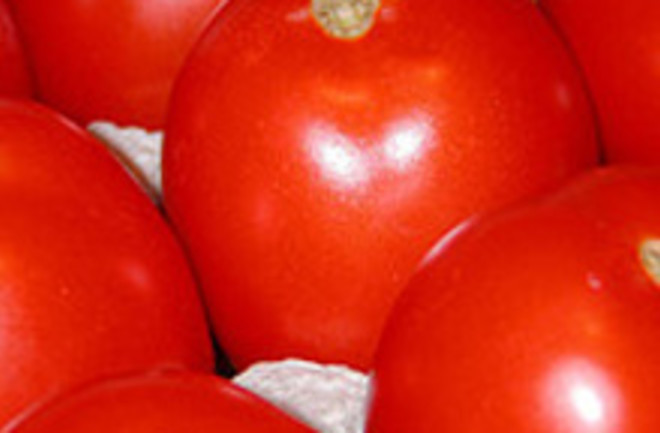 You've probably heard that you can't get tomato on your Big Mac right now—restaurants like McDonald's have stopped serving them because of the current salmonella scare, in which almost 150 people have gotten sick from eating tainted tomatoes. Federal officials haven't isolated the source of the outbreak yet, but according to New Scientist, it could have started because the fruits in question—raw red plum, red roma, and round red tomatoes—were cleaned too much.Like our own bodies, tomatoes and other fruits are often crawling with other bacteria that don't make us (or them) sick. These other microbes, however, are competitors for salmonella, and keep the pathogen from multiplying out of control, according to Keith Warriner, a microbiologist from the University of Guelph in Ontario. He says that overzealous cleaning of tomatoes can kill off the benign bacteria and make it easier for pathogens like salmonella to proliferate. In a lab experiment, he coated tomatoes with another kind of bacteria that doesn't make people sick, and those fruits tested positive for salmonella less often than regular one.Make no mistake, you should still wash tomatoes just before you eat them. The problem arises, Warriner says, when producers sanitize tomatoes and then the fruits sit at room temperature in storage or during travel to the supermarket, giving any surviving salmonella the chance to make a comeback. He found the same results in a separate study that used a combination of UV light and hydrogen peroxide to sanitize different fruits: "The initial reduction of pathogens is high," Warriner told DISCOVER, "although growth of residual survivors occurs if the product is held at room temp."Some scientists think that other explanations could be possible, such as the washing releasing extra nutrients in fruits or vegetables for bacteria to feed on, he says, as opposed to his hypothesis of reduced competition. Whichever it is, the over-washing problem seems similar to the issue of antibiotics overuse and resistance—trying too hard not to get sick could again be making us sicker in the long run. To stop outbreaks of our microscopic nemeses like salmonella in commercial produce, the answer might be more bacteria on our fruit, not fewer.