A global shutdown in 2020 seemed to turn over city streets (and, supposedly, canals) to wildlife. Ecologists saw something deeper. 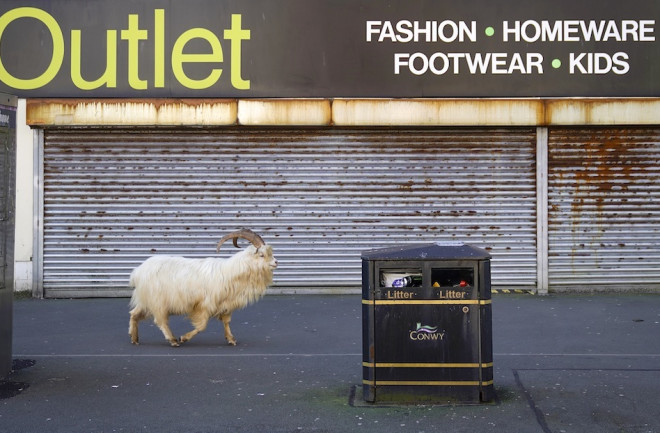 A goat roams the streets of Llandudno in Wales while COVID-19 shut down the mountain village. (Credit: Christopher Furlong/Getty Images)

This article appeared in Discover’s annual state of science issue as “Did COVID Heal Nature?” Support our science journalism by becoming a subscriber.

The Welsh village of Llandudno went quiet in March as stay-at-home orders began. Then the goats descended from the mountain.

A wild herd of Kashmiri goats hasv lived near Llandudno for almost two centuries, and they sometimes come down from the Great Orme Mountain during inclement weather. But this spring, while the human world hit pause, they settled into town for a few days, munching on hedges and trotting down the empty streets.

The goats joined a host of animal celebrities flooding the internet after they supposedly reclaimed urban areas: dolphins frolicking in Venice’s clean canals, elephants drunk on corn wine in a tea garden in China’s Yunnan province. Tweets announcing these events proclaimed that nature was recovering from years of abuse by humans, thanks to COVID-19 shutdowns.

While the goats really did come to Llandudno, many of the other reports were false or exaggerated. The “Venetian” dolphins were actually in Sardinia, hundreds of miles from Venice. It’s not clear where and when those elephant photos were taken, but they don’t seem to be linked to COVID shutdowns (nor pachyderm debauchery). It all begs the question: Did COVID really heal nature?

When humans stayed in, animals came out, according to many anecdotal accounts during the pandemic lockdowns in the spring. Studies are still evaluating the potential impact. (Credit: Dibyangshu Sarkar/AFP/Getty Images)

“It’s much more complicated than that,” says Seth Magle, ecologist and director of the Urban Wildlife Institute at Chicago’s Lincoln Park Zoo. “This pandemic seems very long to us in the span of our lives, but from an evolutionary, ecological standpoint, it’s really the blink of an eye.”

Sparrows in San Francisco did, in fact, change their song during lockdown, according to a September study in Science. But it could be months or years before we have extensive data about the overall effects of the pandemic on wildlife, says Chris Schell, an urban ecologist at the University of Washington Tacoma. “We’re sort of living through the experiment.”

So far, Magle says, there’s some anecdotal evidence of changes in animal behavior. Raccoons are naturally active at dawn and dusk, but when people are around, they sometimes shift to night hours. Magle heard reports that with fewer people out during quarantine, raccoons moved away from the graveyard shift and started coming out at twilight.

He also suspects that some animals might have ventured into urban areas not to reclaim their historical territory, but because more humans ventured into animal habitat to combat cabin fever.

“I actually think some of our natural spaces are maybe being more used by humans, which may push animals more into urban landscapes,” says Magle.

While the scientific jury is still out, stories and social media can convince us that animals were bolder during lockdown. Perhaps bird numbers in your yard seemed extraordinary. But, Magle cautions, it might just have been that we were watching. “Maybe that cardinal always comes to your house at 11 a.m. You are just home now, so you see it,” he says.

Animal behavior isn’t the only change people noticed. In some cities, the reduction of traffic made the air cleaner. This spring saw a 17 percent dip in CO2 emissions as people stayed home and didn’t drive.

The problem is that one spring is barely a drop in the bucket in terms of affecting the planet’s climate in the long run, says Corinne Le Quéré, a climate scientist at the University of East Anglia who published a paper on the phenomenon in Nature. “Although this is a really steep decrease in emissions, never seen before, as far as we can tell,” she says, “this drop in emissions does nothing to slow down climate change.”

That’s because humans have pumped billions of tons of CO2 into our atmosphere for decades. A few months of reduced driving aren’t enough to fix that. Substantial change would require long-term shifts in policy and industry.

“You can’t tackle climate change with behavior change alone,” Le Quéré says. “You need behavior change, and you need people to accept new technology and encourage them to embrace it.”

That, she adds, means “tackling climate change needs to be led by governments.” Schell views this moment like going to the hospital for a minor injury and finding out that you have a serious underlying heart condition. Noticing how the air is cleaner and the animals are bolder when people stay home reveals the bigger structural changes we need to make. That includes social changes, too.

“COVID wasn’t necessarily the elixir that healed or is healing nature,” Schell says. But it did draw our attention to the ways humans affect the environment: “What happens in society feeds back into ecology.” Similarly, inequity and systemic racism for many years have created “environmental mosaics of inequality”— pockets of greater ecological harm in poorer and more marginalized communities.

“If we’re going to see sustained healing, like legitimate healing, it’s not going to be right away,” he says.

The spring of 2020 gave us a valuable glimpse of what life could be like if we made systemic changes to help the environment long term. “I hope that’s something that we really will carry forward after this pandemic is behind us,” says Magle. “This idea that yes, we need animals in our neighborhoods. It makes us feel good to watch them and it gives us this sense that we live in places that are kind of wild and kind of unexpected and that can surprise us in a really positive way.”

More From Discover
The Sciences
This Virus Could Clarify the Origins of Complex Life
Health
Wearable Copper Could Protect You Against Bacteria and Viruses
Health
Hunter Gatherer’s Gut Bacteria Might Show History of Our Microbiome
Mind
A Promising Treatment for Mental Disorders: Fecal Matter Transplants
Health
What to Feed Your Microbes
The Sciences
Labs Are Assembling Synthetic Genes, and It's Cheaper Than Ever
Recommendations From Our Store
My Science ShopDiscover STEM Kits
My Science ShopDiscover 2022 Calendar
My Science ShopStrange Science
My Science ShopElements Flashcards
Shop Now
Stay Curious
Join
Our List