Sophisticated speech analysis could lead to earlier screening and treatment for autism, depression, dementia and more. 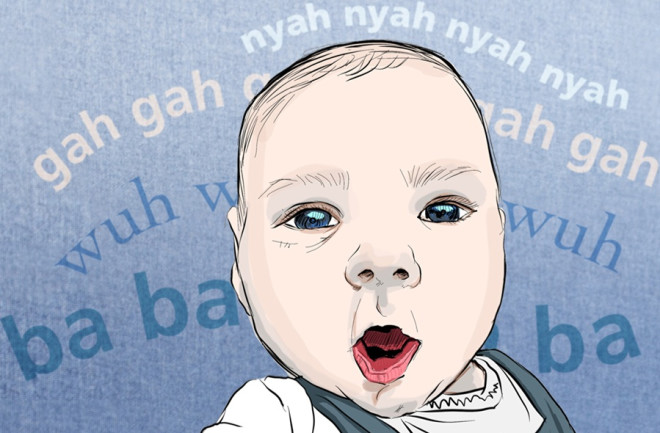 The baby is a few months old. His earliest cries are short, his lungs too small to produce the prolonged wail of a toddler. A few months later, he can pull in enough air to elicit a sort of chuckle. And by 6 months, he’s trying out vowel-like sounds — wuh, wuh, wuh. Soon, he’s combining consonants and vowels and repeating them. Nyah, nyah, nyah, he says with evident glee. The baby has begun babbling, as large a developmental milestone as sitting or standing.

Nobody learns to talk without babbling, says Gordon Ramsay, director of the Spoken Communication Laboratory at the Marcus Autism Center in Atlanta. But babies at risk of developing autism babble later than the average 6 to 9 months. Speech scaffolds the entire learning process, so missing those early vocal milestones can derail a child’s cognitive development.

This device, used once a month for an entire day, records babies at risk of autism. The audio is later run through speech analysis software. (Credit: Marcus Autism Center)

But today, autism is rarely diagnosed before age 2, and usually after age 4. So Ramsay has developed a vocalization analysis program — a sort of verbal blood test — to screen for at-risk babies. His long-term hope is that identifying children at risk of developing autism and intervening during those formative early months will prevent one of the disorder’s most devastating symptoms. “I’m absolutely convinced that no [autistic] child needs to be nonverbal,” he says.

New speech analysis tests could also help doctors screen for several other cognitive and mental health ailments, such as dementia and depression, that can be difficult to detect in their early stages. The programs analyze voice recordings, measuring acoustic characteristics such as pauses between words, intonation and pitch. They eventually “learn” to identify unusual vocalization patterns characteristic of specific disorders. Knowing these vocal biomarkers could change the screening process entirely.

Ideally, these tests could help identify disorders before full-blown symptoms manifest, says Emily Tucker Prud’hommeaux, a computational linguist at the Rochester Institute of Technology in New York. “Wouldn’t it be nice to stop progressive cognitive impairments before they progress very far?” she says.

In the early 1990s, when Ramsay was a young graduate student at Cambridge University in England, automated speech recognition programs (think Apple’s Siri) just started to appear. The programs guessed at words and sentences based on the statistical probability of someone uttering a certain sound or phrase, akin to autocorrect on smartphones. Yet Ramsay wasn’t interested in using the programs to develop new technologies; he was more interested in understanding the physics of speech, such as how the mouth’s motions create sound.

Humans use sounds and vocal gestures, such as pitch or talking speed, to convey information, according to speech perception theories. By building a speech recognition model that incorporated information about the biology of speech production, Ramsay hoped to test those theories using real-world data. In 2004 he joined Haskins Laboratories, a speech and language research center in New Haven, Conn., to look into developing such models.

Gordon Ramsay studies the software's analysis of a captured vocal interaction between an infant and caregiver. (Credit: Marcus Autism Center)

While at Haskins, Ramsay met Ami Klin, then an autism researcher at neighboring Yale University. Klin was working with babies who had older siblings diagnosed with autism. Such younger siblings have a 1 in 5 chance of developing autism — 14 times higher than children in the general population. So Klin, who now directs the Marcus Autism Center, wanted to see how these younger siblings perceived talking faces.

He asked Ramsay to explain how the mouth’s shape affects the sounds we make, which piqued Ramsay’s interest in testing his new speech recognition models on infants. Existing models, Ramsay explains, cannot recognize immature acoustic patterns, yet a model based on the biological patterns of speech, like his, should work at all ages.

Through their partnership, Klin eventually persuaded Ramsay to study the younger siblings to identify differences in their vocal interactions with the hope of one day screening for autism using vocalizations.

Recording in the Wild

Ramsay already knew about the pioneering work of Kimbrough Oller, a psycholinguist at the University of Memphis in Tennessee. Oller reported in 2010 that he had developed a customized algorithm to distinguish autistic toddlers from healthy children with a remarkable 86 percent accuracy, in part, by isolating syllables and analyzing them for acoustic features, such as jaw and tongue movement.

Oller’s work was groundbreaking, but he knows it can be pushed further. By 18 months of age, “we already have lots of ways of showing that a child is en route to developing autism,” he says. What’s really needed is a way of identifying even younger at-risk babies.

So Ramsay embarked on a five-year longitudinal study in 2012 to create a vocal development growth chart, similar to those doctors use to gauge a baby’s physical growth. Every three months, trained clinicians conduct formal assessments of all the babies, and Ramsay observes the babies in the clinic once a month. He also captures all-day recordings of them once a month while they’re at home or, as he says, “in the wild.” His program then checks for conversational turn-taking between caregiver and infant, cry acoustics and sounds indicating babbling, like pa or ba.

The sound spectrogram above shows a typical infant-caregiver interaction. By tracking the harmonic structure of the voice, moments where infant (red) and caregiver (blue) are vocalizing can be automatically identified, labeled and separated from background noise. Important conversational cues, such as the intonations and resonances of each speaker’s voice and the relative timing of their vocal interactions, can be extracted from the recording. (Credit: Marcus Autism Center)

Babies who score low on an initial voice analysis test would be further evaluated to determine what kinds of intervention, if any, they should receive. These tests would make autism screens more accessible than the one-on-one time with a trained clinician that’s currently needed. But the real promise of screening with vocal analysis tests lies in their simplicity and affordability, Ramsay says: “It’s just not possible to screen every child at risk with a $5,000 assessment.” The vocal recorder Ramsay uses, by comparison, costs just $10. “I basically can reach anybody the USPS guy can reach,” he says.

Vocal screens could also help adults at risk for cognitive or psychiatric disorders who face similar challenges. For instance, researchers at IBM Research in Haifa, Israel, are developing a five-minute screening tool that uses voice recordings and computer analysis to identify people with mild cognitive impairment, a precursor to dementia.

In pilot studies in France and Greece, the tool pinpointed patients with confirmed mild cognitive impairment 80 percent of the time. The team recently launched a larger study in which participants will perform more vocal tasks to strengthen the technology.

Voice analysis could also help spot signs of relapse in those with psychiatric illnesses such as depression, bipolar disorder and schizophrenia, says Brita Elvevåg, a cognitive neuroscientist at the University of Tromsø in Norway. Elvevåg is developing voice analysis software that can tell if patients’ mental states are worsening. If it detects a combination of telltale vocal changes — such as a patient talking faster or at a different pitch, or speaking less coherently — it would alert a health care provider.

At Risk and Nowhere to Go

But even if Ramsay successfully identifies babies showing signs of autism, the next step isn’t obvious. “How do we go about putting in place support for families when there is no treatment [for very young children] yet?” he asks.

Fortunately, researchers are piloting early intervention programs. Connie Kasari, an educational psychologist at the University of California, Los Angeles, meets twice a week with families with children 12 to 21 months old who are at risk of autism. She encourages healthy skills, such as pointing or making eye contact. After two months, one 12-month-old boy who rarely smiled, vocalized or made eye contact with his parents said his first words, and his parents felt they could more easily interact with him. But the results need to be replicated, and Kasari isn’t comfortable saying she prevented the boy from developing autism. If Ramsay can identify very early vocal warning signs, however, such early interventions hold considerable promise.

Ramsay plays me one more recording of the now 12-month-old baby boy. “Buuuh-bee,” he says. “Baby,” says his mom. “Baby,” he repeats with perfect clarity. Ramsay suspects this mom, at least, has little reason to worry.

This article originally appeared in print as "Altered Voices."

More From Discover
Health
Could COVID-19 Be Changing Who We Are?
Mind
How Your Brain’s “Fingerprints” Could Diagnose Disease
Health
Decorate For the Holidays Early and it Might Improve Your Mood
Mind
What Is Dissociative Identity Disorder?
Health
What You Can Do About Seasonal Depression
Health
Year-Round Daylight Savings Could Threaten Our Sleep and Heart Health
Recommendations From Our Store
My Science ShopDiscover STEM Kits
My Science ShopDiscover 2022 Calendar
My Science ShopStrange Science
My Science ShopElements Flashcards
Shop Now
Stay Curious
Join
Our List