Earlier I reviewed a new paper which made some species-wide grand claims about the nature of human demographic dynamics. Specifically, as it relates to the ratio and reproduction of males and females over time. But to me some of the less ambitious but more specific work in this area where demographics, anthropology and genetics intersect are nearly as interesting. From example, look at this figure: 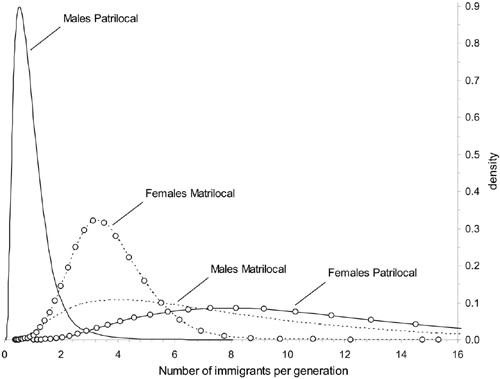 This distribution shows the confidence intervals estimated from genetic data in relation to sex-specific migration rates. Granted, as noted in the paper, Molecular analysis reveals tighter social regulation of immigration in patrilocal populations than in matrilocal populations, the distributions overlap, but the difference is great enough to make a plausible case in terms of an inference. In short, patrilocal societies in the sample seem to limit male migration between demes. Matrilocal societies far less. It seems to pass the smell test, and the genetic data allows one to put some numbers and quantitatize differences. A more recent paper, Sex-Specific Genetic Structure and Social Organization in Central Asia: Insights from a Multi-Locus Study, has an event more detailed figure: 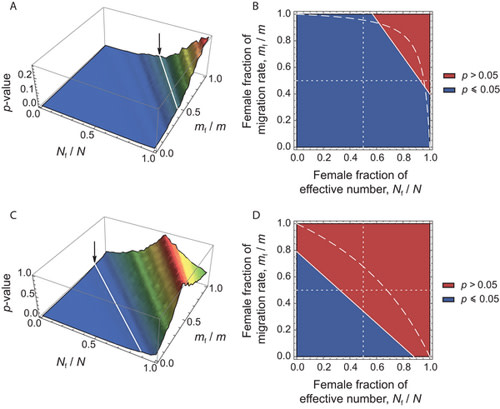 are the proportion of females and the proportion of females migrating. Since they're proportions it stands to reason that the intervals will be 0 to 1, with biological plausibility being somewhere in the range of ~0.50 for humans because of the approximate 1:1 sex ratio at birth. A & B represent patrilineal nomads while C & D represent bilineal agriculturalists. The p-values are important because they illustrate the region of "parameter space" which can be rejected. That is, where p-values are ≤ 0.05, the blue region of the charts, are not supported by the data reported in the paper. Note the relative constriction of the parameter space for the patrilineal nomads; this suggests a relative excess of females to males in proportion in terms of both effective population size and migration. Is this biologically plausible in terms of what we know about the history, demography and anthropology of this region? I think so, but the final decision is up to the individual I suppose....