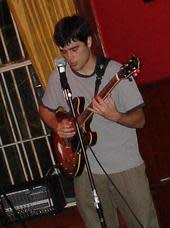 My brother Davy, a talented young jazz guitarist, is the subject of a lengthy profile in today's edition of the New Orleans Times Picayune. The occasion? He got through a grueling competition and so became the first of seven students admitted into the Thelonious Monk Institute of Jazz Performance's 2007 class at Loyola University, which has just been established. Here's an excerpt from the article, outlining my brother's story:

By the summer of 2005, he had graduated from UNO and settled into a comfortable life as a working musician, performing at least five nights a week. He and his wife bought a three-bedroom house in Mid-City. They adopted a dog. "I was very much planted and domesticated," Mooney said. Then Katrina intervened. The couple evacuated to Washington, D.C., then to New York. They rented a tiny apartment in the Astoria section of Queens. Back in New Orleans, Mooney's mother moved into his undamaged house after losing her own home in Lakeview. The rest of the Hot Club of New Orleans joined Mooney in New York. When two of his bandmates returned to New Orleans, Mooney decided to stay put. "I felt like I needed to be in New York," he said. "I liked the energy, and the level of playing." Other full- and part-time New Orleans jazz expatriates -- Simon Lott, Scott Bourgeois, Mark Anderson, Martin Urbach, Brian Seeger -- helped ease his transition. He recorded a duo CD with John Pizzarelli and another CD for a Japanese record label, "opportunities that probably wouldn't have happened if I had stayed in New Orleans." He didn't work as frequently, but enjoyed the extra time off. However, his New York rent equaled his New Orleans mortgage. "Everything is more expensive. I don't know how anybody does it," he said. "We don't have the same quality of life as we did in New Orleans."

But now my brother is moving back, thanks to the Monk Institute. I'm really proud of him, and I'm sure New Orleans must be, too. For more on Davy Mooney: You can listen to some of my brother's clips here, or purchase individual tunes. You can buy his CD here. I'll end with his YouTube video: