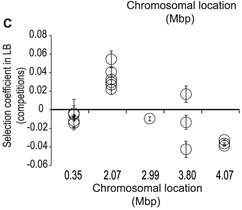 To the left is a panel from a new paper in PLoS Genetics, Selection-Driven Gene Loss in Bacteria. The y-axis is selection, so above 0 represents a positive selection coefficient, and below a negative one. The lineages above the x-axis then are more fit against the baseline wild type (selection coefficients above 0.01 can be considered rather strong, with 0.08 very strong). The top-line result of this paper is that

11 out of 55 deletion constructs in bacterial lineages seem to result in increased fitness.

This is rather weird if you are viewing it from a homocentric perspective, or more ecumenically, a multicelluar organismic perspective. If you add copies of a gene the result is not always good because of dosage effects (Down Syndrome is an extreme case of this on the smallest chromosome). If you delete whole regions of the genome the results are usually disastrous. This comports with common sense. If you break something it isn't usually a good thing. It was there for a reason. But this heuristic may not be applicable to bacteria. Or, more precisely, when you remove the large set of parameters which constrain the adaptive landscape of multicellular organisms, you may be exploring an evolutionary space with somewhat different rules. If someone reported that 25% of deletions in a multicellular organism resulted in increased fitness I'd probably be curious if there was a basic human error somewhere along the way generating this crazy proportion. But fast-breeding and genomically economically designed bacteria may not be governed by the same expectations. In the first set of experiments the authors constructed lines with deletions. In a second set they predicted that wild type lineages which underwent experimental evolution would eventually also accrue deletions. They could confirm this by sequencing their genomes. And sure enough, they did seem to find suggestive evidence for such a dynamic, though I'd have to look deeper into the supplements to be convinced (I do not get the sense from the text that these results were quite so strong). How to explain this conundrum? Think of three-spined stickleback. In the natural environment of bacteria they have to encounter many different adaptive pressures, and no doubt have a whole suite of phenotypes derived from genetic processes. But once transferred to stable and rich culture media these adaptations are superfluous. One might posit that the deletions are simply release of functional constraint, and stochastic loss of function (i.e., basically atrophy on the genomic level), but remember that lineages with deletions seem positively selected for in many cases! The authors argue that this looks to be more than a random-walk process. Atrophy occurs because of the lack of negative selection pressure against loss of a trait and its genetic underpinning. But there may also be genuine costs to a trait, so that atrophy is positively selected for. For large organisms that is obvious when it comes to construction of tissue, or perhaps a complex and energetically intensive behavior. But in bacteria the root of the issue is somewhat different. I'll let the authors speak here:

...With regard to the beneficial deletions, one potential explanation is that loss of these genes result in decreased energy/mass expenditure on DNA, RNA and protein and a resulting faster growth rate because more resources can be allocated to other rate-limiting processes.... 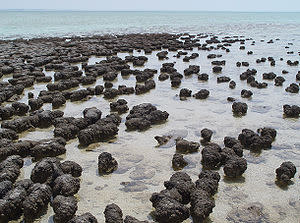 Bacteria live in a hyper-competitive world in comparison to lumbering complex organisms with long generation times. Extraneous biochemical processes can slow them down, or reduce their growth rates. In the wild these processes may not be extraneous, so that those without them may grow faster, but then perish. In a wild, wild, world you may need to go fully armed, top to bottom. Yet recall that armaments are heavy, and require upkeep. In controlled laboratory situations you see that there is a sloughing off of these regions of the genome, as if they're tossing their guns aside to make a run for it. Complexity in all its glory may be a response to a protean world where one is faced with a flux of unpredictable parameters. In contrast, in a regime of static environmentone might imagine the evolution of a perfect and ideal replicator, slowly swallowing the rest of the tree of life. Until that is underlying conditions change, and perfection turns to maladaptation. Citation: Koskiniemi S, Sun S, Berg OG, Andersson DI (2012) Selection-Driven Gene Loss in Bacteria. PLoS Genet 8(6): e1002787. doi:10.1371/journal.pgen.1002787