Cousin Marriages May Be Taboo, but They're Not Genetic Disasters 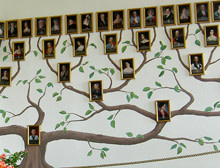 In the western world, marriage between first cousins is labeled incest or inbreeding, and in the United States the practice is banned or restricted in 31 states. But a new essay argues that such laws are based on an outdated notion of the genetic risks involved in cousins marrying and reproducing.

[T]hose laws "seem ill-advised" and "should be repealed," a geneticist and medical historian write.... "Neither the scientific nor social assumptions that informed them are any longer defensible" [Scientific American].

First cousins share about an eighth of their genes, and are therefore more likely to receive two copies of some recessive gene that poses health problems. Scientists had assumed that the children of first cousins would therefore be more likely to be born with birth defects. But coauthor Hamish Spencer writes that

the risk of congenital defects is about 2 per cent higher than average for babies born to first-cousin marriages – with the infant mortality about 4.4 per cent higher – which is on a par with the risk to babies born to women over 40. "Women over the age of 40 have a similar risk of having children with birth defects and no one is suggesting they should be prevented from reproducing," said Professor Spencer [The Independent].

The editorial, published in the journal Public Library of Science Biology, focuses on the laws that restrict cousin marriages (China, Taiwan, and North and South Korea also ban the practice) and the stigma that is attached to such unions, especially in the United States.

"Unlike the situation in Britain and much of Europe, cousin marriage in the U.S. was associated not with the aristocracy and upper middle class but with much easier targets: immigrants and the rural poor," they write [Wired News].

However, the authors note that the low rate that they cite for birth defects from cousin marriages is based on populations where the practice is rare; if cousins in such places marry, their offspring are likely to look outside the family for mates and will therefore bring new genes into the bloodline. Birth defects may be more likely in places where cousin marriages are commonplace, but the studies of this topic remain difficult and controversial.

In February 2008, British Environment Minister Phil Woolas sparked a row in the United Kingdom when he attributed the high rate of birth defects in the Pakistani community to the practice of marriage between first cousins, the commentators said. Earlier studies estimated that between 55 per cent [and] 59 per cent of marriages continue to be between first cousins in Pakistan [CBC News].