Cousin marriage should not be banned (?)

PLOS has a think piece up, "It's Ok, We're Not Cousins by Blood": The Cousin Marriage Controversy in Historical Perspective, which comes out against the laws in the United States which ban the marriage of cousins:

It is obviously illogical to condemn eugenics and at the same time favor laws that prevent cousins from marrying. But we do not aim to indict these laws on the grounds that they constitute eugenics. That would assume what needs to be proved - that all forms of eugenics are necessarily bad. In our view, cousin marriage laws should be judged on their merits. But from that standpoint as well, they seem ill-advised. These laws reflect once-prevailing prejudices about immigrants and the rural poor and oversimplified views of heredity, and they are inconsistent with our acceptance of reproductive behaviors that are much riskier to offspring. They should be repealed, not because their intent was eugenic, but because neither the scientific nor social assumptions that informed them are any longer defensible."

Here's a map which shows the time period when these laws were enacted: 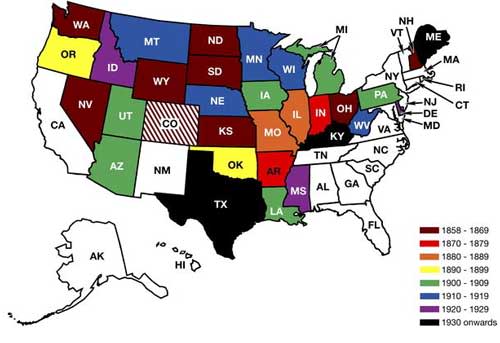 Here are the numbers for the increased risk of congenital diseases for progeny of first cousin marriages:

Their report concluded that the risks of a first-cousin union were generally much smaller than assumed--about 1.7%-2% above the background risk for congenital defects and 4.4% for pre-reproductive mortality--and did not warrant any special preconception testing. In the authors' view, neither the stigma that attaches to such unions in North America nor the laws that bar them were scientifically well-grounded. When dealing with worried clients, the authors advised genetic counselors to "normalize" such unions by discussing their high frequency in some parts of the world and providing examples of prominent cousin couples, such as Charles Darwin and Emma Wedgwood....

These are obviously small elevated risks. When you move on to second or third cousins the genetic risks basically disappear. But, this is not the only issue. The authors note:

Third, as the report also notes, the degree of increased risk depends on the mean coefficient of inbreeding for the population. That is, whether first-cousin marriage is an occasional or regular occurrence in the study population matters, and it is thus inappropriate to extrapolate findings from largely outbred populations with occasional first-cousin marriages to populations with high coefficients of inbreeding and vice-versa. Standard calculations, such as the commonly cited 3% additional risk, examine a pedigree in which the ancestors (usually grandparents) are assumed to be unrelated. In North America, marriages between consanguineal kin are strongly discouraged. But such an assumption is unwarranted in the case of UK Pakistanis, who have emigrated from a country where such marriage is traditional and for whom it is estimated that roughly 55%-59% of marriages continue to be between first cousins...Thus, the usual risk estimates are misleading: data from the English West Midlands suggest that British Pakistanis account for only ~4.1% of births, but about 33% of the autosomal recessive metabolic errors recorded at birth...However, for a variety of reasons (including fear that a cousin marriage would result in their being blamed for any birth defects), UK Pakistanis are less likely to use prenatal testing and to terminate pregnancies...Thus the population attributable risk of genetic diseases at birth due to inbreeding may be skewed by prenatal elimination of affected fetuses in non-inbred populations. Moreover, the consequences of prolonged inbreeding are not always obvious. The uniting of deleterious recessives by inbreeding may also lead to these alleles being purged from the population. The frequency of such deleterious alleles, then, may be decreased, which (as shown above) means the relative risk is greater, even as the absolute risk decreases.

That's a mouthful. Here are the two main points: 1) Calculations of risk on the order of 2% may only be valid for cousin marriages in outbred populations. In societies where cousin marriage is preferred "cousins" may be related by numerous lines of descent, so their "real" relatedness is much greater than the norm for cousins. 2) This sort of extreme inbreeding can result in the purging of genetic load in the population because it "exposes" deleterious alleles to "selection." In other words, there is a light at the end of the tunnel whereby inbred populations may reduce their aggregate frequency of deleterious recessive alleles through the process of generating a higher than expected number of homozygotes than in a randomly breeding population. Consider a single gene deleterious recessive, if it is extant as a frequency of 10%, in a randomly breeding population only 1% of the population would manifest the deleterious phenotype. So only 10% of the deleterious alleles are subject to any selective pressure. If on the other hand there is a strong correlation in matings between those who carry the deleterious allele, then the proportion of those who express the phentoype increases, a larger proportion of the deleterious alleles are in individuals who have a homozygote recessive genotype. Finally:

Those who characterize it as slight usually describe the risk in absolute terms and compare it with other risks of the same or greater magnitude that are generally considered acceptable. Thus it is often noted that women over the age of 40 are not prevented from childbearing, nor is anyone suggesting they should be, despite an equivalent risk of birth defects. Indeed, the argument goes, we do not question the right of people with Huntington disease or other autosomal dominant disorders to have children, despite a 50% risk to offspring...On the other hand, those who portray the risk as large tend to describe it in relative terms. For example, geneticist Philip Reilly commented: "A 7 to 8% chance is 50% greater than a 5% chance. That's a significant difference." They also tend to compare the risk with others that are generally considered unacceptable. Thus a doctor asks (rhetorically): "Would anyone knowingly take a medication that has double the risk of causing permanent brain damage?".... 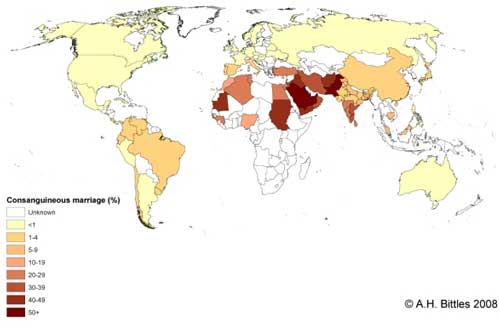 Here's a Google Maps interface from Consang.net. 1 - In the pre-modern period the Church's interference in marriage was mostly something that only applied to elites. Additionally, the Church also looked the other way on many occasions, and the rules in regards to incest were so strong (e.g., out to 7 degrees) that it was a back-door which one could use to annul marriages.