Could an Ingredient in Ice Cream Prevent HIV Transmission? 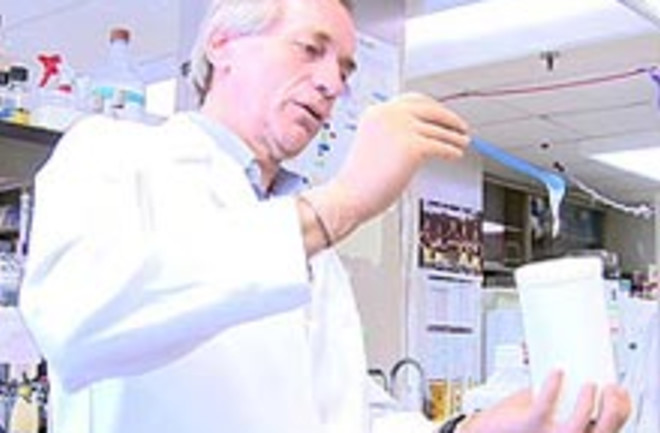 A compound often used in cosmetics and foods like ice cream may soon find a loftier use: Researchers say a topical gel containing the compound has shown great promise in preventing HIV infection. An effective vaginal gel would be particularly useful in Africa, where the virus is most commonly passed through heterosexual contact. Researchers say that while the current formulation of the compound does

not provide 100 percent protection, it might greatly reduce a woman's risk of being infected, and she could use it privately and without hurting her chances of pregnancy [Reuters].

The compound, glycerol monolaurate (GML), already has FDA approval because it's used as an emulsifier in some foods and cosmetics; it's also found naturally in breast milk. What's more, the price for the compound is right: each dose used in the experiment cost about one cent. The research marks a new approach to microbicides, as most other gels under development try to kill the virus outright or prevent it from attaching to cells. In contrast, GML stifles the host's own inflammatory response that typically summons the immune cells targeted by the virus.

"Even though it sounds counter-intuitive, halting the body's natural defence system might actually prevent transmission and and rapid spread of the infection," said chief investigator Ashley Haase [AFP].

Since GML prevents the immune cells from gathering, the HIV virus can't infect them all and spread through the body. In the new study, published in Nature, researchers tested the compound on monkeys; human studies are still some way off.

The team gave a vaginal application of GML gel to five rhesus macaque monkeys and exposed them and a comparison group of five other animals to two large doses of simian immunodeficiency virus (SIV) -- the monkey equivalent of HIV [AFP].

In the control group that hadn't received the treatment, four of the monkeys contracted SIV. But the five who had received treatment showed no sign of infection after several weeks, even when they were given two more shots of the virus. Researchers are excited about the results.

"Ordinarily when we expose these animals to these high doses two weeks later an infected animal will have hundreds of millions of copies of virus floating around in its bloodstream. And all of the GML treated animals had nothing at two weeks" [Minnesota Public Radio]

, says study coauthor Pat Schlievert. But he also cautions that the SIV virus is not identical to the HIV virus, and say there's no guarantee that the gel will be equally effective on humans. Researchers also note that one of the five treated monkeys did develop the infection months later, and say they need to

study their gel in more monkeys for longer periods of time to ensure the gel is not simply delaying infection rather than preventing it [Reuters].

Related Content: 80beats: Monkeys Are Infected With HIV in the Name of Science 80beats: If Everyone Got an Annual AIDS Test, Could We Beat Back the Epidemic? 80beats: HIV Vaccine Trial Cancelled in a Setback for AIDS Research DISCOVER: Biologists Watch HIV Replicate in Real Time DISCOVER: Why Is AIDS Worse in Africa? Image: University of Minnesota, showing investigator Pat Schlievert with the gel