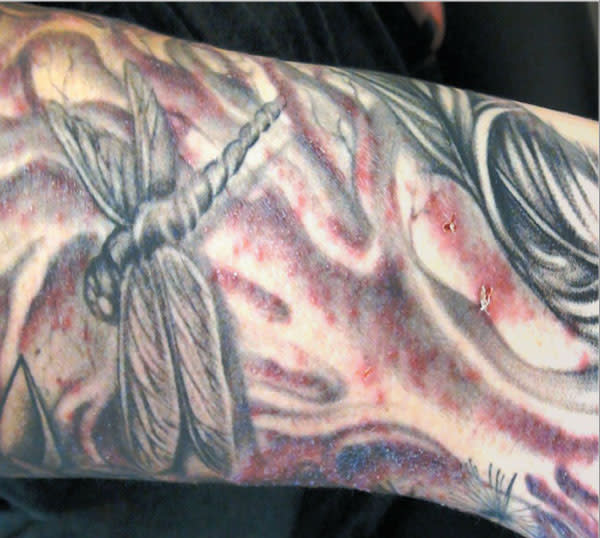 In January of this year, a string of unusual patients began to trickle into dermatologist's offices in Rochester, NY. They had red rashes on areas where they had recently had tattoos, and the usual treatments were not working. The cases, 19 in all, were reported to the local department of public health. A team there learned that all the patients had developed the rash, which turned out to be a bacterial infection, within three weeks of getting a tattoo at a particular parlor. When they interviewed the tattoo artist, they learned that he had recently begun to use a new kind of grey ink. Such ink is often used to create shadow effects, and indeed, the patients' rashes tended to be on the areas where the grey ink had been injected into their skin. The new color had come from a trade show in Arizona, and this particular artist was the only person using it in the county, as well as the only one whose clients came down with the rash. Since the tattoo artist ran a tidy shop---a health department inspection raised no red flags there---the investigators focused their attention on the ink. They called in the FDA, which requested samples from the ink manufacturer and had the CDC check to see whether the bacterium behind the infections was there. It was, in one of the three unopened bottles they tested. It must have crept in at some stage in the manufacturing process. No one really knows, though, how the bacterium got there. Though the patients were eventually treated with a barrage of antibiotics and the ink was recalled, this outbreak, which was recently described

in the New England Journal of Medicine, highlights a somewhat unnerving reality: Tattoo ink is considered a cosmetic, and the FDA has very little power to regulate the cosmetics industry. It can, once an outbreak is suspected, request samples and ask the Department of Justice to seize products. But it cannot make manufacturers submit data proving that their products are safe before they are put on the market. As more and more people get tattoos---the rate has grown from 14% to 21% of the US adult population in just the last 4 years---we may see more outbreaks that have more to do with safety failures on the manufacturer's end than on the hygiene of the tattoo parlor.