Composting Robot Can Reduce, Reuse, and Recycle Your Scraps 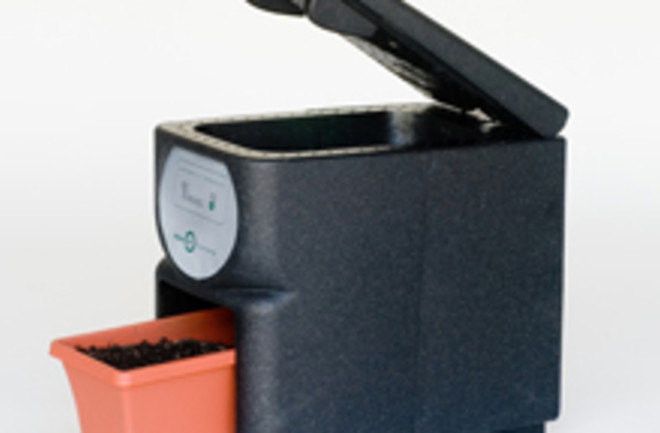 We never eat 27 percent of the food that exists on the shelves in grocery stores or that is served in restaurants and kitchens. There is one way to save the fate of wasted food ending up in landfills. You’ve all heard of it, but probably never tried it: composting. People who do compost know that it smells terrible and requires a host of bacteria, earthworms, and fruit flies to turn into soil—which is why apartment and city dwellers typically avoid the practice. But now those problems may be eliminated. The San Francisco-based company NatureMill is selling a composting "robot" to make composting hassle-free, and the machine might soon become an American household mainstay. All you have to do is plug it in, and the robot does all the work. The machine can chomp on up to 5 pounds of food a day— turning dinner leftovers into soil in less than two weeks. The top chamber decomposes the food as the microbes heat up the mush until the waste has fully fermented. It's then dumped into a lower bin. The nitrogen-rich soil is left to dry until it is ready to be poured into a garden. A carbon-filter eliminates (most of) the odor, but the cultures in the compost produce a slight mushroom-y smell. A fan brings in air to feed the cultures with oxygen so they can consume the waste quickly. For what it’s worth, over its lifetime, the robot can save two tons of waste from ever hitting the landfills. Not so bad for a $400 gadget. Click here to watch how it works. Related Content: Discoblog: Child Robot Can Walk Discoblog: Sweating Robot