Columbus was a seer

Last month I pointed to two papers on China genetics. Rereading a bit more closely, I stumbled upon a very curious PC plot. It shows the relationship of various continental populations on the first two principal components of variation genetically. Look at how Mexican Americans from Los Angeles compare to Gujarati Americans from Houston: 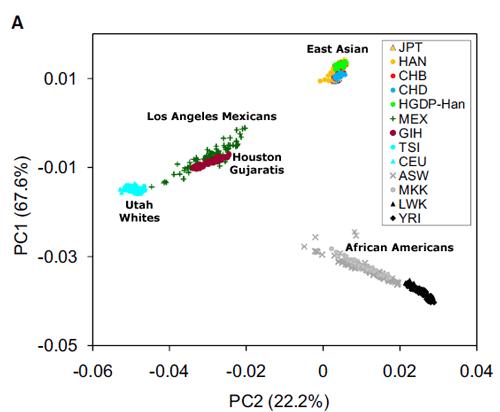 In world wide context South Asians and mestizos can be viewed as somewhat analogous; a stable admixture between West and East Eurasian elements. Of course, the "East Eurasian" ancestry of mestizos consists of the New World descendants of Paleolithic Siberians, while those of South Asians are the ancient long resident populations of that region of the world. In a distant sense the latter are likely the root population from which the former originated, mediated by an East Asian interlude (i.e., the populations of eastern Eurasia passed through South Asia during the Out of Africa movement).