Closing In On Vaping's Most Toxic Ingredient 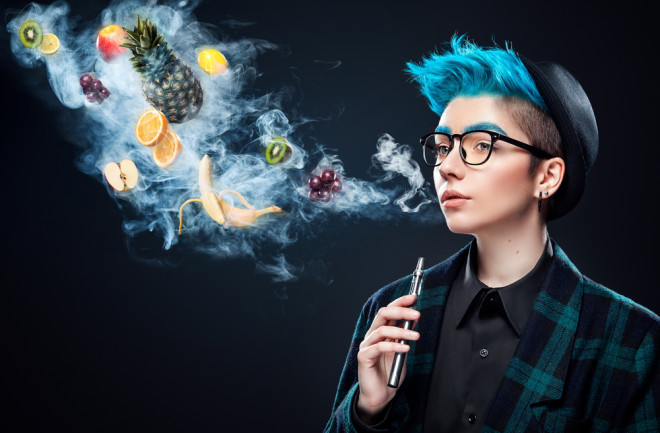 How many breathless older smokers rue the day they first inhaled nicotine and tar?

Initially hailed as a smoking cessation breakthrough, e-cigarettes have now been raising red-flags for years. Thanks to nicotine, vaping can be just as addictive as true cigarettes. And even if youthful vapers never drag on a Camel, preliminary evidence suggests they may still get chronic bronchitis – or even suffer a serious case of pneumonia, according to a study in the European Respiratory Journal earlier this year. In their research, scientists cultured cells and exposed them to e-cigarette vapor. The cells showed a three-fold increase in the kind of molecular receptors that Streptococcus pneumoniae happily attach to. This microbe, commonly known as pneumococcus, is the world’s leading cause of life-threatening bacterial lung infection. The researchers also reported identical results from studies of “vaped” mice and nasal cells scraped from human vapers who, an hour earlier, had puffed on their gadgets at least 10 times over five minutes.

The study’s lead author, Jonathan Grigg of Queen Mary University London, has also studied how welding and fossil-fuel fumes affect human airways. He says he was worried from the first moment he saw how these microbes attached to vapers’ cells. For smokers’ sake, Grigg had hoped his results might be underwhelming.

He’s not the only one concerned, either. Jonathan Samet, senior editor of the Surgeon General’s Report on Smoking and Health, is similarly worried about the growing trend. “Vape products are changing far more quickly than the scientific community can evaluate them,” Samet says. “It’s a big problem for tobacco control researchers.”

And there’s still one question left unanswered: What is vape’s most toxic ingredient?

That’s an easy question to answer for conventional cigarettes, where tar causes a marked increase in lung cancer risk. But e-cigarettes don’t have that same smoke and tar.

Vapes, in contrast, were designed to deliver flavored nicotine via a pleasing aerosol. They don’t have smoke or tar. All of the devices share the same basic components: a battery, heating device and liquid housed in various casings. And these nicotine liquids now feature more than 7,000 flavors. Some researchers say the gadgets’ appearance, flavorings, and ease of use are especially attractive to teens.

“Since e-cigarettes are currently unregulated, you can add anything to them,” says UCLA’s Holly Middlekauff who studies the negative effects of inhaled nicotine on vapers’ hearts.

But for Samet, the potential lung harm caused by inhaling flavorings is just as unsettling as the heart problems. He cited the cautionary tale of diacetyl, a buttery chemical flavoring added to microwave popcorn and other foods. In 2002, fifteen years after the earliest evidence surfaced, inhaled diacetyl was finally linked to a severe, irreversible lung disease called “bronchiolitis obliterans” in popcorn factory workers. In 2007, most major manufacturers removed diacetyl from their popcorn products.

Whether or not inhaled flavorings end up known as vape’s most toxic component, experts say there’s one diacetyl lesson should never be forgotten. Compounds that the Food and Drug Administration deems “generally safe for ingestion” can cause very different effects when humans breathe them in rather than eat them.

More From Discover
Health
Extreme Fatigue: 4 of the Longest-Lasting Sporting Events
Health
What Science Says About the Weight-Loss Potential of The One-Meal-a-Day Diet
Health
Walking vs. Running Benefits: Should You Walk or Run for Exercise?
Technology
What Is a Social Media Cleanse?
Health
What is the Purpose of Hiccuping?
Mind
Gut Bacteria's Role in Anxiety and Depression: It’s Not Just In Your Head
Recommendations From Our Store
My Science ShopDiscover STEM Kits
My Science ShopDiscover 2022 Calendar
My Science ShopStrange Science
My Science ShopElements Flashcards
Shop Now
Stay Curious
Join
Our List