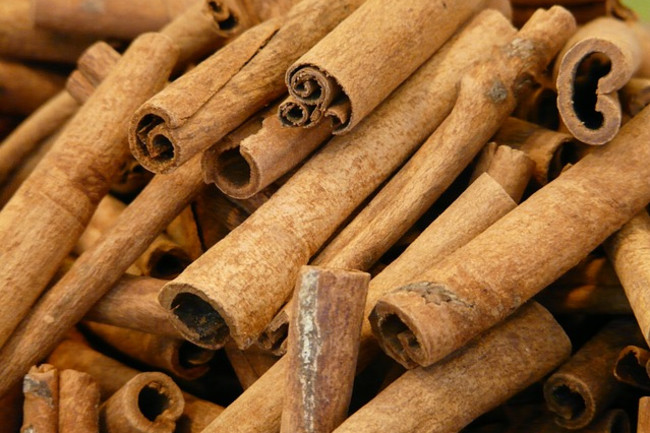 Photo credit: Hans Braxmeier (Hans/Pixabay) Sweet and spicy, cinnamon is one of the oldest spices known to humans; it is also a favorite topping or secret ingredient in both sweet and savory recipes. This warm spice is obtained from the dried inner bark of several species of trees within the Cinnamomum genus. True cinnamon however, sometimes known as Ceylon cinnamon, comes from C. verum (also, C. zeylanicum, the antiquated botanical name for the species), indigenous to Sri Lanka. Other Cinnamomum species that are cultivated for commercial purposes are C. burmannii (Indonesian cinnamon), C. loureiroi (Saigon cinnamon or Vietnamese cinnamon), and C. cassia (Cassia or Chinese cinnamon) [1]. Analysis of the fragrant essential oil from cinnamon bark reveals the main compound responsible for the sharp taste and scent of cinnamon comes from cinnamaldehyde (also known as cinnamic aldehyde). Since its identification in 1834 by French scientists, Jean-Baptiste Dumas and Eugene Péligot, cinnamaldehyde has been found to be a rather useful molecule outside of the spice rack. Studies have suggested that cinnamaldehyde has antioxidant properties, which makes it a promising anticancer agent [2]. Further, cinnamaldehyde has been shown to work effectively as pesticide, fungicide, and antimicrobial agent [3]. Of course, one of the most useful properties of cinnamaldehyde is making apple pies extra delicious.